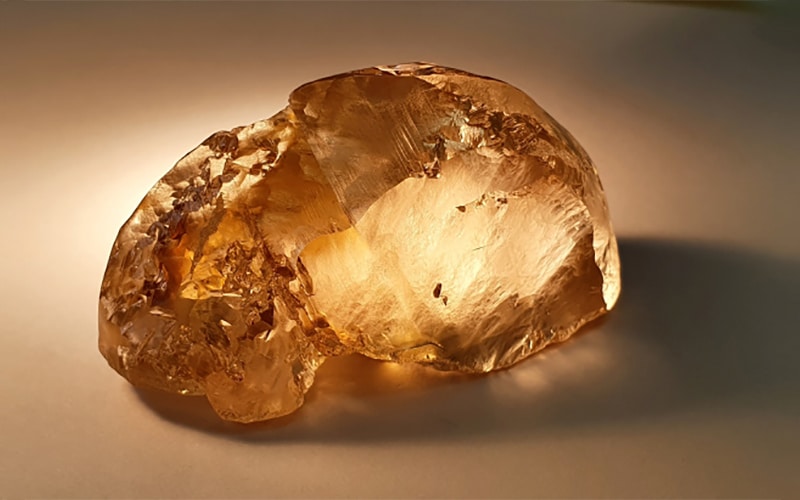 The Ebelyakh mine in Yakutia has yielded the largest natural fancy-colored rough diamond ever extracted in Russia. Estimated to be 120-230 million years old, the 236-carat yellow-brown crystal measures 47 x 24 x 22 mm.

Only one out of an estimated 10,000 rough diamonds mined is fancy-colored. This has resulted in steady historic growth in value for natural colored diamonds over time, with prices increasing 12% on average per year for nearly two decades.

Operated by Almazy Anabara, a subsidiary of ALROSA, the Ebelyakh deposit is an alluvial operation on the Anabar River. That river’s basin is the largest known concentration of diamond deposits in the world outside of Africa and Australia. Since 2017 Ebelyakh has treated us to a number of notable natural fancy-colored diamonds.

The Spirit of the Rose

It was fashioned into polished form in Moscow. The result is a 14.83 carat Fancy Vivid Purple-Pink diamond with Internally Flawless clarity named “The Spirit of the Rose,” which has its own website and video.

The Spirit of The Rose from ICEBERG LLC on Vimeo.

Diamond cutters in Moscow performed their own polishing music on the crystal, fashioning “Stravinski” into “The Firebird,” a 20.69 carat Fancy Vivid Yellow diamond with high clarity and finish. Ultimately purchased by Graff, this product of ALROSA’s rich Ebelyakh mine also boasts its own website and video.

FireBird from ICEBERG LLC on Vimeo.

Plans for the newcomer

Such a large natural color rough diamond is a unique discovery. Now, the stone is at ALROSA’s United Selling Organization being studied and evaluated by our specialists. After that, we will decide whether to give it to our manufacturers for cutting or sell it as a rough. Of course, cutters in any country will be interested in such a diamond, as it has the potential to give several high quality polished diamonds.

Given the wonderful results we’ve seen before, we’ll be watching with anticipation!