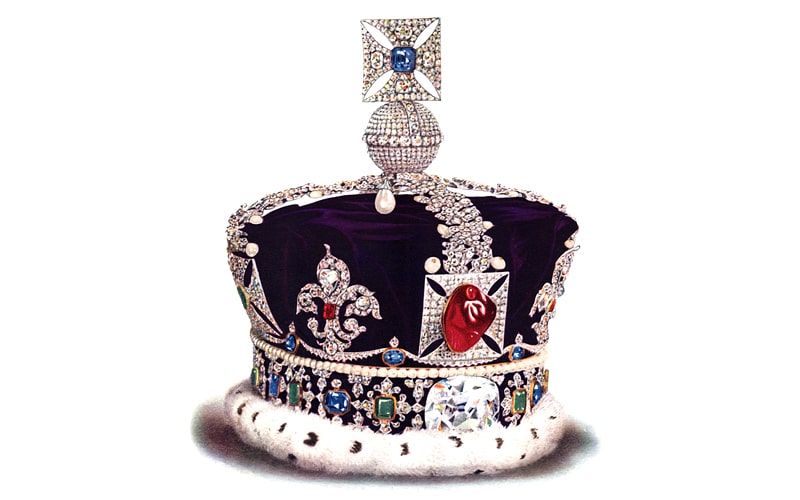 Who can say? Whether it’s imagination, disagreement, politics over rare and expensive objects, or planets aligning poorly – there are a number of gemstones rumored to curse those who own them. Of course, in at least one famous case below, the rumors may have been exaggerated to appeal to a buyer. But whatever the case there’s entertainment value in the stories below.

Removed from India during the 1857 Rebellion, the Delhi Purple sapphire has a troubled history. Some time after its removal from the Temple of Indra (the Hindu god of war and weather) the purple stone surfaced in England, in the hands of one Colonel W. Ferris. Soon afterwards the dear Colonel went bankrupt and declined in health. His son inherited the stone and, upon experiencing similar fates as his father, gifted it to a friend.

Solved? No. The friend committed suicide!

That’s not all. Edward Heron-Allen took ownership in the late 1800s and soon underwent a string of misfortunes. When he passed the amethyst to a friend who was a singer she lost the use of her voice and never sang again. Ultimately it was placed in the Vault of the Natural History Museum in London, locked within seven different boxes where it was instructed not to be removed until three years after the owner’s death.

This cursed stone began as an imposter. For over 400 years it posed as a ruby in the Crown Jewels of the United Kingdom until proven to be red spinel. This actually occurred with a number of famous pieces in history. You can read about this, as well as “the red trickster” in a prior GemBlog article, Identifying isotropic vs anisotropic gemstones.

This beautiful spinel (nee ruby) has been a part of lore since it belonged to the Sultan of Granada. That potentate was killed in battle by Pedro the Cruel (what a lovely name), the King of Castile, who took the ruby…err…spinel as his battle prize. But soon after taking possession, the Cruel one’s forces were attacked by his own half-brother. He appealed to Edward the Black Prince – you can see where this is going – for assistance. And when Edward’s forces helped Pedro the Cruel defeat his rebellious half-brother the gemstone was given to the Black Prince of Wales in thanks.

Ironically (or not) Edward contracted a disease around that time which ultimately caused his death.

A few more English Monarchs had bad-luck with the stone. Henry V wore it into battle and nearly died at Agincourt in 1445, and Richard III was said to be wearing it when he fell and died at the Battle of Bosworth in 1485. Depending on what you may believe, the curse has quieted. But people still speculate when odd or mysterious dangers or damage occur near the Tower of London.

We will conclude with the most famous of them all.

The Hope Diamond began as the Tavernier Blue, which merchant traveler Jean-Baptiste Tavernier brought to France from India in the late 1600s. I should mention a prior GemBlog post reviewing Tavernier’s exploits and The French Blue right here.

Sold to King Louis XIV, the diamond was worn until the looting of the French Crown Jewels in 1792. Evidence suggests the stone resurfaced after being recut into what we know as the Hope Diamond today, but there’s more to the story. Acquired by King George IV, the diamond had to be sold after his death to pay massive debt. The next time it surfaced it was in the possession of London gem specialist Henry Philip Hope – with no provenance or origin documented. It stayed with Hope’s family for some time.

In 1909 Pierre Cartier purchased the “Hope Diamond,” intending to sell it in the prosperous American market. Despite prospective purchasers being a small target audience, Cartier was a tremendous salesman. He found an interested buyer in Evalyn Walsh McLean. In addition to changing the setting design, Pierre romanced the concept of the diamonds “curse,” which actually appealed to McLean. She felt that unlucky items had proven lucky for her and acquired the Hope.

Poor Evalyn. Soon afterwards, her first-born son was killed in an automobile crash and her husband ran off with another women. He succeeded in spending their fortune before being committed to a sanitarium. It didn’t end there. Her daughter died of a sleeping pill overdose and their family business (The Washington Post) went out of business. Sadly, the next year Evalyn Walsh McLean died.

The silver lining to this story is that Harry Winston purchased McLean’s collection and donated it to the Smithsonian. It’s their most popular attraction, in case you want to go see it for yourself.

It appears that the curse has been lifted, but I’m not going to lie. On my last visit I wore a personal “lucky charm” to ward off any bad juju or spirits.

So far so good.

Proposing this season? Arm yourself with information.