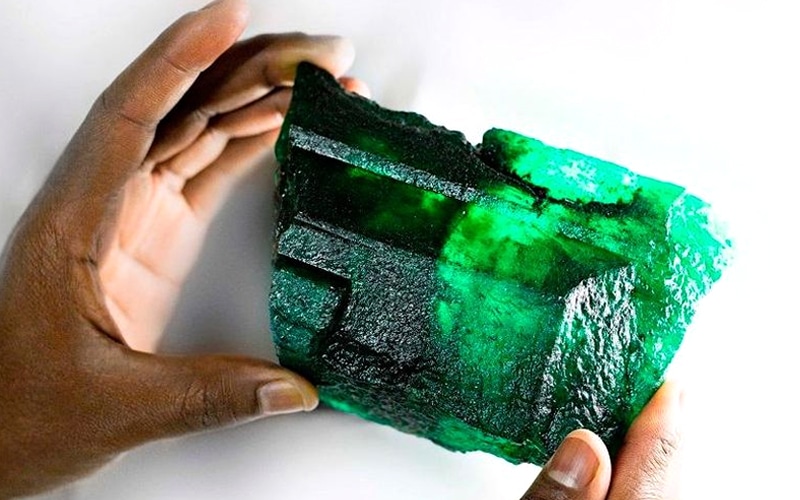 You know it as emerald, the birthstone of May

Technically a mineral composed of beryllium aluminium cyclo-silicate, beryl’s popular varieties also include aquamarine and morganite. But today’s post celebrates all Maybies and Mayple (May babies and May people) with a focus on “your stone.”

The largest high-quality rough emerald ever found, and the poetic story of its provenance and sale.

The Lion of Zambia

That barrel-shaped beryl-rough is the famous 5,655 carat emerald unearthed at the Kagem mine in Zambia in 2018. Estimated to be 450 million years old, this enormous crystal was discovered by geologist Debapriya Rakshit and miner Richard Kapeta in an eastern area of the mine which was proving especially fertile at the time.

The specimen was extraordinary enough that Gemfields Group, the mine’s majority owner, gave it the rare honor of a name: “Inkalamu” which, in the Zambian Bemba language, means Lion.

A total of 45 approved auction partners competed to purchase Inkalamu a month after its discovery. When the auction concluded the world remained in suspense, hearing no word about Inkalamu’s new owner for six months. Gemfields managing director for product and sales, Adrian Banks, had predicted a number of end-results in pre-auction coverage from Forbes:

There might be hundreds of ‘offcuts’ that are fashioned into smaller gems, cabochons, and beads, but the key lies in recovering the fine quality pieces. Given this emerald is such a rare find, it is also perfectly conceivable that the buyer will choose to purchase it as an investment.

The Lion returned to the public eye in June, 2019 when auction winner, luxury jeweler Diacolor, unveiled the uncut gemstone at their company’s flagship store in Delhi, India. Neither Diacolor nor Gemfields have revealed the amount of the winning bid, but experts estimate that figure to be around $50 million, which would make it one of the world’s most expensive gemstones.

The original plan for the spectacular rough emerald was cutting and nano-tagging, which would permit all future stones polished from the rough to be traced back not only to the mine of origin but to the gem of origin. However, Rishabh Tongya, creative director of Diacolor, has reportedly mentioned the possibility that Inkalamu could be offered to a museum.

Green beyond its color

In addition to sustainable sourcing at their Kagem mine, the Gemfields Group provides ongoing aid for wildlife conservation, community development and poaching prevention. In that spirit, 10% of the auction proceeds from the Lion were donated to their conservation partners, the Zambian Carnivore Programme and the Niassa Carnivore Project. This created a revenue stream which has flowed, poetically, back to Inkalamu’s mother-country to benefit the real Lions of Zambia.

Our green Lion’s journey is not over. We will wait, with anticipation, for the next chapter in this historic gemstone’s story. In the meantime, happy birth-month to all of my May babies and May people. As Joanna Hardy penned it, there’s hope in the air.

The green colours of spring remind us of rebirth, renewal and nature, and it is no coincidence that emeralds have always been associated with these calming and rejuvenating properties. Wearing an emerald connects us with the earth, reminding us that there is hope in the air.