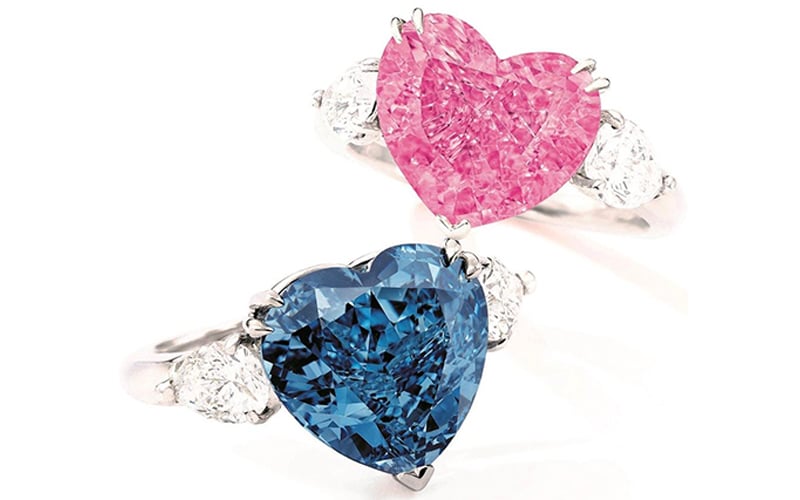 The July Sotheby’s Hong Kong Magnificent Jewels auction did not disappoint, in items offered or bids commanded. I thought I would share a few of my favorite jewelry items sold – and sprinkle in another genre or two, just for fun.

Promoted as a pair by Sotheby’s we are not certain both heart-shaped diamonds went to the same buyer. What a delightful story it would make if they did!

The most expensive Rolex ever sold

Sotheby’s broke its own 2018 record, once again succeeding in moving the most expensive Rolex ever sold.

A platinum Rolex Daytona Zenith, this singular creation features a dial made of Lapis Lazuli. The gavel finally fell at $3.2 million dollars, which was more than five times the estimate prior to auction.

This Van Cleef & Arpels “Zip” necklace crafted in gold and platinum with round brilliant diamonds sold for $363 thousand dollars.

This brooch from Cartier’s classic “Tutti Frutti” collection features carved sapphires, rubies and emerald, along with abundant diamonds, in the style of this iconic series. It sold for $323 thousand dollars.

One of the most compelling auction items was a vase made specifically for the Qianlong Emperor, who ruled China for more than 60 years.

This precious item had spent the past 50 years in the country house of an elderly women who inherited it, unconscious of its true value. The story was made compelling by observations about the many pets sharing her home, permitted to freely roam around the rare artifact. Amsterdam art consultant Johan Bosch van Rosenthal is credited for realizing its value after being invited to analyze her collection. Prior to its sale, Nicolas Chow of Sotheby’s Asia remarked:

It is a miracle that this extraordinarily fragile vase survived half a century in a home surrounded by countless pets.

Once sold for $56 dollars, this rediscovered masterpiece – now accompanied by a charming story – was purchased for $9 million dollars.

As I imagine she has – I’d like to thank the lady’s good doggies and kitties for doing their part to preserve this treasure.

The most expensive item sold over the cycle of this Sotheby’s auction was Sanyu’s 1952 painting Quatre Nus. It was purchased for $33.3 million dollars.

If you would like to read more about Quatre Nus, there is good coverage on TheValue.com website. And if you’d like to see more of the delicious jewelry items sold, just click over to Anthony DeMarco’s article on Forbes.com.

Are there Affordable Natural Diamond Colors?