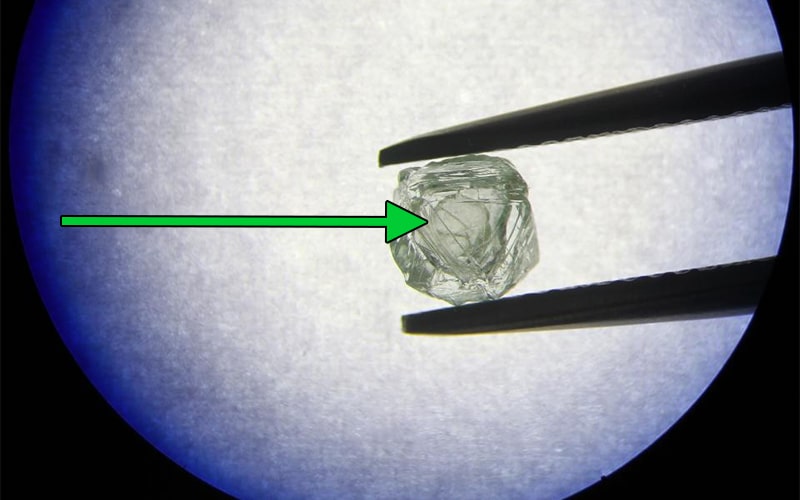 This natural gift is not recent. To be fair, this “diamond within a diamond” is more than 800 million years old, but humans have only been aware of it for a span of months.

The adamantine oddity was unearthed at an open-pit mine 200 miles north of Nyurba, Russia last October. Specialists of the Yakutsk Diamond Trade Enterprise discovered they had an unusual 0.62 carat freak of nature on their hands during the sorting process and immediately passed it to ALROSA’s Research and Development Geological Enterprise.

Dubbed the “Matryoshka” in honor of Russia’s wooden nesting dolls, the motion of the small loose diamond nested within another diamond can be seen in this darkfield video.

The scientists of ALROSA’s R&D Geological Enterprise used several advanced methods to study the diamond – including Raman and infrared spectroscopies as well as X-ray microtomography – and developed a hypothesis regarding its formation.

According to Deputy Director Oleg Kovalchuk:

The most interesting thing for us was to find out how the air space between the inner and outer diamonds was formed. We have two main hypotheses. According to the first version, a mantle mineral captured a diamond during its growth, and later it was dissolved in the Earth’s surface. According to the second version, a layer of porous polycrystalline diamond substance was formed inside the diamond because of ultra-fast growth, and more aggressive mantle processes subsequently dissolved it. Due to the presence of the dissolved zone, one diamond began to move freely inside another on the principle of matryoshka nesting doll.

This x-ray image shows the void around the diamond crystal, floating within another crystal.

It’s estimated that approximately 0.11 carats of diamond dissolved through two small channels extending from the inner cavity to the diamond’s surface. That left a 0.03 carat diamond crystal which is entirely detached and moves freely within the outer shell.

As far as we know, there were no such diamonds in the history of global diamond mining yet. This is really a unique creation of nature, especially since nature does not like emptiness. Usually, some minerals are replaced by others without cavity formation.

Cleaning diamonds from the ocean

Free jewelry in Ohio if it snows on Christmas