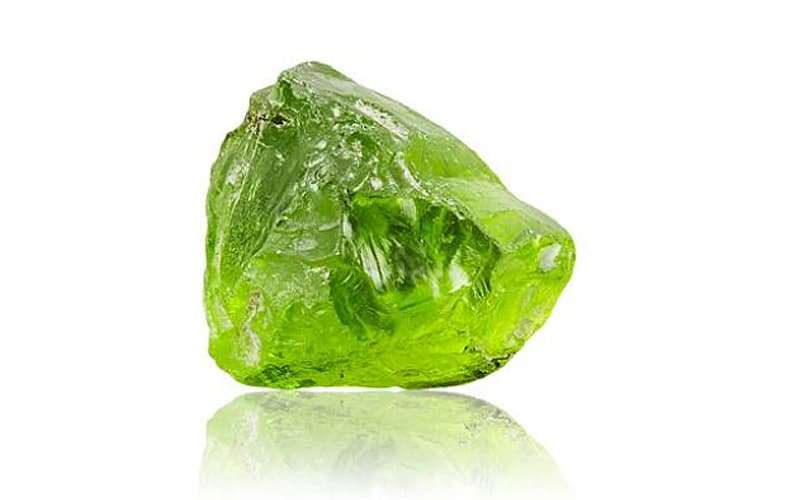 Green gemstones are beloved worldwide and have been for thousands of years.

The color green is friendly and popular, and has historically been ascribed positive meaning in different cultures – from wealth in the west and success in the east to global symbolism of environmental awareness in recent years. When new sources of green gemstones are found it’s worthy of celebration – and recently we had the largest discovery to date. Buried in the foothills of China’s Changbai mountains, approximately 150 km from the border of North Korea the world’s largest known deposit of peridot, aka chrysolite, was discovered last year.

From Deep in the Earth

A hearty 6.5-7 on the Moh’s hardness scale, peridot is the only gemstone other than diamond which formed down in the earth’s mantle due to plate tectonics (there are also celestial peridots, found in the Pallasite class of meteorites, but we’ll save that story for another day). It is also one of the few gemstones that occurs in only one color – alluring shades of green. High quality peridot has enjoyed a surge of popularity in recent years, featured in high jewelry by Bvlgari and Pomellato, as well as collections from Ara Vartanian, Margot McKinney and Temple St. Clair, among others. “Peridot green” has carved a niche for itself among gem lovers and that niche may be about to expand dramatically.

Fuli Gemstones International Holdings holds the license to the Yiqisong Nashan peridot mine which may contain as much as 5.19 million tons of ore. A marketing strategy is under development for peridot – with an eye on what N.W. Ayer & Son did for DeBeers’ and Diamonds in the 20th century – raising public awareness and creating worldwide demand for the gem. The marketing will initially target the United Kingdom and China. Sold under the Fuli name, these new peridots are already being referred to as “Fuli Gemstones.” The company has enlisted the help of Pia Tonna, who raised the value perception of colored gemstones in Europe and Africa while working for Gemfields. She will now serve Fuli as chief marketing officer and an executive director.

Ms. Tonna has a history of rich associations to draw-from. The ancient Egyptians were fascinated with peridot, calling it “the gem of the sun.” The Romans considered darker peridot “evening emeralds,” due to their similar hardness and hue. Healers in the middle ages believed peridot had the power to cure depression and open the heart for hope. Just over a century ago, peridot enjoyed great popularity in the United Kingdom when the Suffragettes used that particular gem as a symbol of hope. And peridot is, of course, one of three birthstone choices for August babies.

As one of the precious “big three,” emerald is the undisputed green gemstone champion. Will this abundance of peridot, coupled with a targeted marketing campaign, change that? Could peridot somehow overtake the timeless emerald in buzz and popularity? We can’t rewrite the Wizard of Oz – so Dorothy and her friends will never follow the yellow-brick road to the Peridot City. The people of Seattle are trendy, though. I wonder if Washington State’s “Emerald City” would ever be changed in favor of the popularity of Fuli Gemstones. It seems unlikely.

While the emerald will likely not be dethroned, do not be surprised if peridot plays an ever-increasing role in the jewelry world in the upcoming years. New markets in Asia and around the world are opening for new gems, and this just may be the new deal in green.

ALROSA is Enjoying a Spectacular 2021