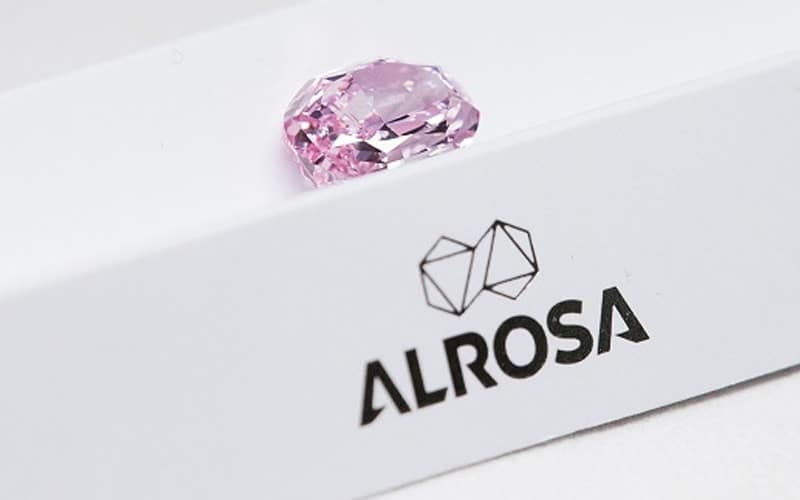 The start of their spectacular ride actually started 10 months ago, in August 2020.

That’s when ALROSA unearthed the largest natural fancy-colored rough diamond ever found in Russia. The 236 carat monsters measured 47 x 24 x 22 mm, which is nearly 2 inches in length. The discovery was made at the remote Ebelyakh mine in the extreme north of Yakutia, near the Laptev Sea.

In September the mining giant’s sales took their own giant step forward, to the tune of $336 million, bringing ALROSA’s total rough diamond revenue for the quarter ending on September 30 to $553 million. While that was 8% lower than the same period revenue during pandemic-free 2019, it was a stunning 750% surge over the second quarter of 2020, and a prelude of things to come.

ALROSA boldly sold the largest purple-pink diamond ever to be auctioned through Sotheby’s Geneva in November. The 14.8 carat “Spirit of the Rose” commanded a final price of 24,393,000 Swiss francs, or 26,700,871 dollars. This diamond’s story was compelling.

The original 27.85 carat rough diamond, unearthed in Yakutia in 2017, had been celebrated as the Discovery of the Year by National Jeweler. In harmony with the polished diamond is produced, the rough diamond had been named the “Nijinsky,” in honor of one of Ballet Russes most celebrated dancers – the man who portrayed the Rose in “Le Spectre de la rose,” – Vaslav Nijinski.

ALROSA’s December 2020 sales amounted to $521.6 million, another leap compared to their $363.8 million 2019 December revenue. Entering 2021, January’s diamond sales totaled $430 million, with rough sales of $421 million and polished sales totaling another $9 million. Not only was this another increase year over yea from 2019 totaling 6%, those January figures brought ALROSA’s diamond sales close to $1 billion over just 60 days.

Over February and March, the Antwerp World Diamond Council (AWDC) reported that rough diamond sales continued climbing, confirmed by ALROSA, with sales of rough diamonds over those months totaled $729 million.

To honor their 100th auction in history, ALROSA hosted sales of high quality rough diamonds in March. Jubilee Auction #100 brought in $7.7 million in just one event involving three notable diamonds weighing 242.31 carats, 190.74 carats and 136.21 carats. As a part of the celebration, special-size diamonds (rough weighing 10.8 carats or more) were also sold in Dubai and Antwerp. It’s worth noting that ALROSA, who had launched digital rough sales prior to the pandemic, continued to enjoy digital auction revenue, bringing in $5.5 million via virtual auctions in the month of March.  When all was said and done, another $357 million in revenue was realized for the month, bringing ALROSA’s Q1 2021 total to $1.16 billion.

A Spectacle in May

ALROSA’s April 2021 sales continued to set higher benchmarks than pre-pandemic times, bringing in a total of $401 million. Another $365 was realized in May, which included $14.2 million attributable to one “Magnificent Jewel.”

We covered the sale of the breathtaking Spectacle Diamond in our post, Christie’s May Jewelry Auctions rake in $140 million.  The ALROSA Spectacle is a 100.94 carat D color, Internally Flawless Emerald Cut. The original rough crystal was unearthed in Yakutia in 2016 and weighed 207.29 carats. Poetically, it was discovered at Zarnitsa, the first diamond deposit ever discovered in Russia (the USSR at the time) in 1954. With a final weight of 100.94 carats, the Spectacle Diamond has been declared the largest ever polished in Russia.

Evgeny Agurev, Deputy CEO of ALROSA, recently reported that ALROSA’s upward trend reflects a worldwide return to diamonds and jewelry in all sectors from mining and tenders, to polishing, distribution and sales.

Despite epidemiological situation in April and early May, which demonstrates substantial improvement since then, cutters and polishers fully adapted and are able to process all available volumes of rough diamonds. End-demand for diamond jewelry remains robust in all key regions. For the first four months of the year jewelry sales exceeded pre-COVID levels of 2019 by 30% in USA, and by 10% in China.

ALROSA, has a history of ensuring that the diamonds they mine create a two-way revenue stream to benefit the indigenous people associated with their extraction. Earlier this month they doubled-down on that philosophy, pledging $60 million toward the social and economic development of the Republic of Sakha, aka Yakutia, and local communities where its operations are concentrated. The company maintains a BB rating from MSCI ESG, which evaluates companies’ environmental, social, and governance performance and is listed on the FTSE4 Good Index. The World Wildlife Fund ranks ALROSA among the top 10 environmentally responsible mining companies in Russia. In 2019, ALROSA received a Diamond Empowerment Fund (DEF) award for community stewardship.

All told, ALROSA is enjoying a spectacular 2021.