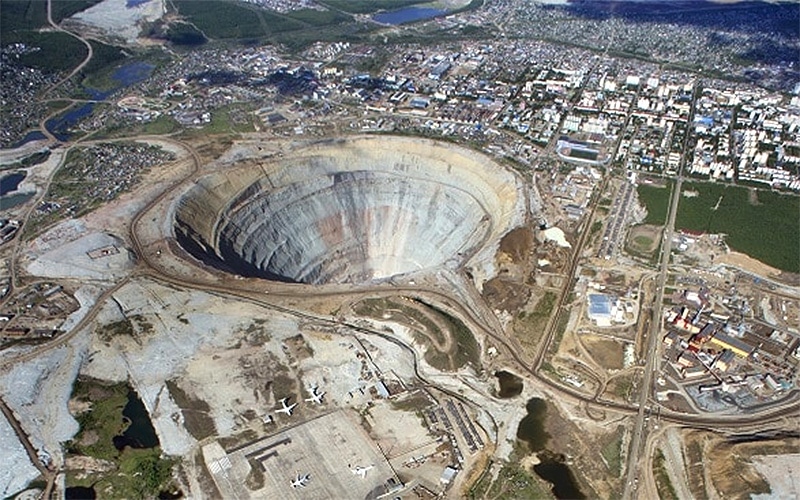 The legendary Mir Diamond Mine, built by the Soviet Union at the order of Joseph Stalin, had a surface operation which lasted 44 years. Adjacent underground operations have continued, off and on, since the pit was retired. Now, the recent discovery of an estimated 38 million carats of diamond reserves at Mir have led to optimism from Alrosa’s CEO about its restoration and further development.

In 1957 Geologist Yuri Khabardin and his exploratory team, responsible for discovering the Mir kimberlite pipe, were awarded the Lenin Prize by the Soviet ruling party, one of the highest ranking awards of the Soviet Union. During the 1960s the Mir mine produced 10 million carats of diamonds per year, with gem-quality yield of around 20%, which is exceptionally high. All told, Mir produced over $13 billion worth of the world’s diamonds, including the “26th Congress of the CPSU Diamond,” a 342.57-carat fancy yellow extracted in 1980, named in honor of the forthcoming 26th Congress of the Communist Party of the Soviet Union.

Development of the mine began in 1955, giving rise to the town of Mirny. Located 510 miles west of Yakutsk (the capital of Yakutia), Mirny has a very harsh climate. Average temperatures during the region’s seven-months long winter reach 40 degrees below zero, enough to freeze oil and shatter the tires of vehicles. During the mine’s development the workers actually used jet engines to thaw the permafrost enough that it could be dug – or blasted it with dynamite – to reach the underlying kimberlite. The entire mine had to be covered at night to prevent the machinery from freezing.

During Yakutia’s short summers Mirny is a place of “White Nights,” where the sun sets after 11:00pm and rises before 4:00am, yet the sky never gets fully dark. In those months the ground turns to slush, so the buildings were built raised on piles to avoid being flooded or sinking into the melting permafrost. The main processing plant had to be built on more stable ground, 12 miles distant from the mining site.

Of Mirny’s population, totaling approximately 40,000 people, nearly 70% are employed by the Russian miner Alrosa, which has primary offices located there. The massive scale of the Mir operation and its status as the second-largest open pit on the planet (it’s over half a mile wide) has seen widespread sharing of images and video of the mine over the decades. Perhaps most famous is the rumor about the vortex the mine creates, in tandem with the region’s weather, which is purportedly strong enough to suck a helicopter out of the air and into its depths.

It’s likely next steps at Mir will be taken with human and environmental stewardship in mind. In 2011 Alrosa and the Republic of Yakutia began focusing on cooperative social and economic development. Over the next 10 years, the miner contributed over $100 million in funding to support the construction of education, healthcare and habitat facilities, sports and cultural halls, and a museum in the republic. They contributed to the Trust Fund of Future Generations in the Republic of Sakha, facilitating the implementation of socially significant projects and programs. A targeted program, “For the Future,” saw cultural activities developed and provided access to education for young people, including children from remote communities. In 2019 Alrosa received a Diamond Empowerment Fund / Diamonds Do Good award for community stewardship and between 2021-2025 the diamond miner has pledged to contribute another $60 million toward social and economic development in areas where its core operations are concentrated.

#ROCKTHEPIN: A Jewelry Design Competition Open To All Students

Video: ‘Behind The Scenes’ with IGI at NYC Jewelry Week