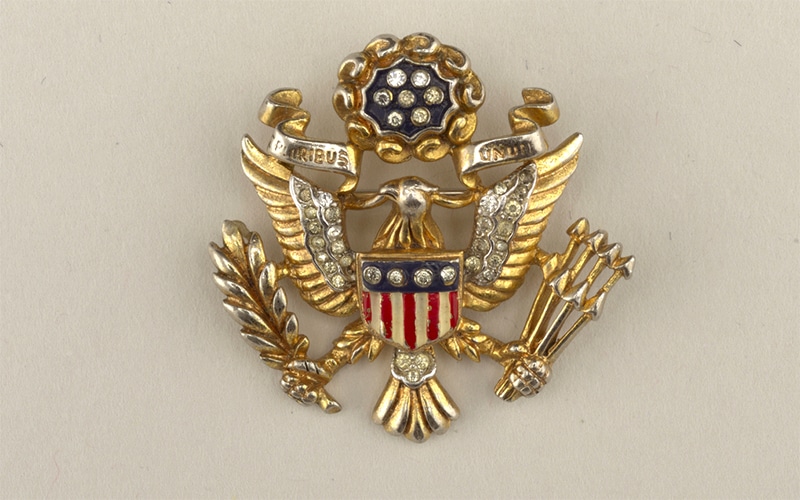 On this USA holiday, when military service is honored and remembered, I thought it would be appropriate to visit some symbolic tokens along the same lines.

Patriotic jewelry is usually inspired by a country’s symbols, colors and iconography. In American history, these symbols became popular during the first World War and reached their height during World War II.

The American Eagle and Uncle Sam were common themes, along with (of course) Old Glory herself. The “Grand Old Flag” brooch below is nicely described by Cynthia Trope, Associate Curator in the Product Design and Decorative Arts Department, Cooper Hewitt, Smithsonian Design Museum.

This ca. 1940 American flag brooch was manufactured by Calvaire, Inc., a New York-based costume jewelry and novelty firm probably founded in the early 1920s. In its early years, Calvaire both imported and produced its wares, but during the war years the company sourced its materials and goods in the United States. This flag boasts a field of forty-eight tiny blue glass paste “stars,” on alternating stripes of ruby- and diamond-like faceted glass pastes in a gilded base metal setting. The gilt metal flagpole is topped by a red glass finial with two metal tassels on free-swinging fine link chains. The tassel fringes are hinged to move as well. At about three inches square, between the glittering “gems” and moving parts, this emblem made a bold and fashionable patriotic statement.

The phenomenon of patriotic Sweetheart Jewelry is one which connected sweethearts, wives, mothers and families at home to loved ones fighting overseas during the World Wars. In addition to family loyalty, sweetheart jewelry often connected the wearer to a certain service branch.

Due to the practice of metal rationing during World War II gold jewelry declined in availability. This caused patriotic and sweetheart jewelry to become produced in different materials including wood and plastics. In place of precious stones or engraved iconography, slogans frequently appeared.  At a time when rationing was necessary pinning on a brooch of any material was seen as fashionable support of the troops overseas.

A wide variety of pieces were produced and priced at many different levels, proving affordable for many people. Patriotic jewelry became a way of connecting with other individuals and families who had loved ones abroad, demonstrating a uniform front at home.

Certain jewelry styles also took on certain specific meaning. Kathleen Golden, an Associate Curator in the Division of Armed Forces History at the Smithsonian, describes deeper meaning of some pins in her piece on this topic.

Many women proudly wore the pin version of a “man-in-service” flag, the blue star in the center, on a white background, with a red border, to indicate a son or husband in service. The service pins, more rarely, could have two or three stars, and rarer yet, could contain a gold star to indicate a death in service.

While rummaging through her own grandmother’s jewelry box Ms. Golden found this patriotic pin, which she describes below.

The “Uncle Sam” hat is embellished with rhinestones, and on the brim is written “In Service For His Country”. I don’t know the particulars of how it came to be in her possession; my grandfather didn’t serve in World War II, but family members and friends did. I’ve worn it from time to time, usually on a patriotic holiday, or if I just feel like giving a shout out to our soldiers serving overseas. One day, in memory of my grandmother, it will become part of the museum’s collections.

Today’s featured image has a story behind it. Design historian Susan Teichman tells us the company which produced this piece in 1945 was founded by Gustavo Trifari, an Italian who immigrated to America in 1904.

By the 1920s, Trifari had become one of the most respected costume-jewelers in the USA. It’s poetic that this particular company, founded by an immigrant, went on to serve as a leading designer and producer of America’s patriotic jewelry at the height of that meaningful movement.