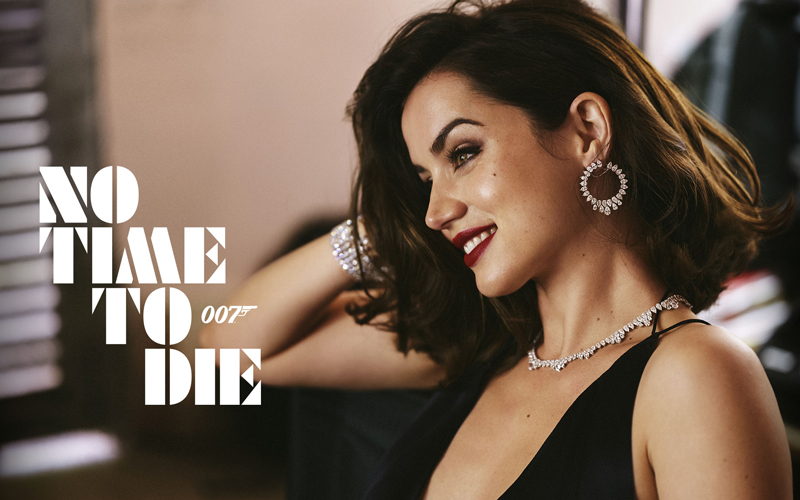 Ever since luxury jeweler Chopard announced their official partnership with the 25th James Bond film “No Time To Die,” we’ve had visions of dazzling gemstones adorning Ana de Armas dancing in our heads.

Last weekend Daniel Craig’s final James Bond film passed the $500 million global box office milestone – at a time when such benchmarks are irregularly difficult to reach -only the fifth film this year to achieve that mark.

If you have seen the movie, Ana does not disappoint. She’s as radiant with Bond as she was in the series of visually breathtaking short videos highlighting love, family, friendship and freedom on the naturaldiamonds.com website,

The Jewels of No Time to Die

The necklace isn’t For Your Eyes Only, it’s a dazzling Spectre to impress The Living Daylights out of anyone On Her Majesty’s Secret Service (including The Spy Who Loved Me…shh).

The World Is Not Enough to ransom for this bracelet, a Skyfall of sparkle which may not be From Russia With Love, but is a Quantum of Solace for all of you Goldfingers and diamond lovers out there.

The earrings are two Thunderballs of brilliance – a pair of Casino Royale treats to match the sparkle in Ana’s Goldeneyes. When you’re adorned in these I’m certain Tomorrow Never Dies!

This collection has the distinction of being the first entirely made from sustainably mined materials in the form of ethical Fairmined certified gold and diamonds from suppliers endorsed by the Responsible Jewellery Council (RJC). Committed since 2013 to the Maison’s Journey to Sustainable Luxury project, Co-President and Artistic Director Caroline Scheufele was keen to showcase these precious creations radiating an aura that is as much ethical as aesthetic.

This 25th installment in the Bond legacy of films proves that great storytelling is long-lasting. That said, with thanks to the franchise for inspiring titles, I saved some context for the last.

The Bond legacy may be legendary but don’t forget… Diamonds Are Forever.