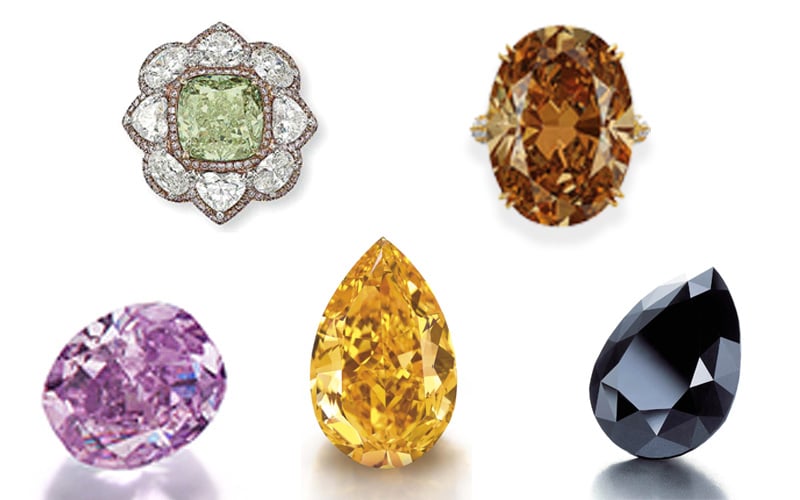 Fancy colored diamonds are very rare to find in nature. They represent less than 0.01% of diamonds mined in the world – or, about 1 in 10,000. Furthermore, nature produces some colors with far more frequency than others, so a diamond transmitting your favorite color might be, literally, 1 in a million.

Generally, the rarer the color the more expensive the diamond. Fortunately there are a handful of natural diamond colors which cost around the same, or less, than diamonds in the normal D-Z color range.

Read on to learn about them.

Green color in diamonds is typically caused by exposure to atomic radiation, although the presence of nitrogen, hydrogen or nickel atoms can also cause green transmission. Most natural green diamonds also have hints of yellow, blue, or gray, making pure green diamonds extremely valuable.

What Causes Other Colors?

Before exploring the cause and affordability of natural diamond colors, be sure you’re familiar with how the gemstone color universe works. Since the human eye can distinguish around 13 million shades and nuances of color, gemologists have developed a consistent method of mapping a gemstone’s proper position in the broad ‘Color Universe.’

We can first stipulate that, like green diamonds, red and pink diamonds stand apart. Unlike most natural diamond colors, caused by chemical elements, green comes from radiation, whereas natural red and pink and diamonds transmit color due to structural defects.

Natural red and pink diamonds have a condition known as plastic deformation. Extreme pressure during their growth process compressed the crystal lattice in a manner that causes them to transmit red light. The greater the pressure, the greater the deformation, the greater the color saturation. This is why red diamonds are only found at small carat weights. The pressure which gave them high saturation also prevented them from growing large.

Most natural purple diamonds derive their color from the presence of hydrogen.

As covered above, green is typically caused by exposure to atomic radiation, although the presence of nitrogen, hydrogen or nickel atoms can also cause green.

Green laboratory grown diamonds can be produced using electron beam radiation. In 2018 consumer concerns about irradiation treatments on diamonds and colored stones caused the Nuclear Regulatory Commission to state: “The NRC has no reason to believe that wearing irradiated gemstones can be harmful. There have been no reported cases of anyone being harmed by wearing them or any other irradiated gems.”

Yellow, orange and brown all come from the most common of non-carbon atoms found in diamonds, which is nitrogen. When nitrogen absorption is found at low wavelengths the color which appears is yellow. When it occurs at higher wavelengths the color becomes orange (with exceptions). Brown is also caused by nitrogen and may be further influenced by plastic deformation.

Most natural fancy grey diamonds get their color from the presence of hydrogen, or sometimes boron.

Some black diamonds are heavily included, close to industrial quality. Others are considered something special… Black-diamonds known as carbonado stand apart. They are found in alluvial deposits in Brazil and Central Africa. Neither of those places are associated with kimberlite, the usual source of gem diamonds, which has made them an enigma. A paper was published in the December 2006 edition of Astrophysical Journal Letters reporting the discovery of hydrogen trace elements in carbonado black diamonds. The details of that discovery imply that carbonado existed long before the Earth was born, arriving here from interstellar space.

Fans of affordable natural colors will enjoy the fact that they’re often more eye-catching than diamonds in the D-Z color range, simply because they’re an unusual alternative. “Fancy yellow” diamonds will be the most expensive in this group, rivaling pricing for diamonds with VS clarity and G color in the normal range.

I say “generally expensive” because of the wide variety of different saturations, as well as modifiers – meaning diamonds with a secondary hue which lowers the value. Examples are brownish-orange, yellowish-orange, etc. A few colors from the “extremely expensive” list can also be found at lower price-points, depending on their secondary – or even secondary and tertiary hues.

When considering diamonds, of any hue, remember that the darker tones tend to hide inclusions better. This can pull a lot of Fancy Deep and Fancy Dark diamonds into practical consideration, since they can be eye-clean at lower clarities than their light, fancy, intense and vivid cousins.

When pure, with decent size and saturation, the following diamond colors are frequently sold through auction houses. The price-per-carat starts high and escalates quickly as clarity, carat weight and saturation improves.

Red For The Win

In terms of natural diamond expense and value there is really no comparison to those with red color. Due to the way they form, even those rare specimens found tend to be tiny and heavily included, vaulting larger, cleaner reds into their own category.

Game, set and match to red.

Christie’s will sell the Largest Diamond ever cut in Russia