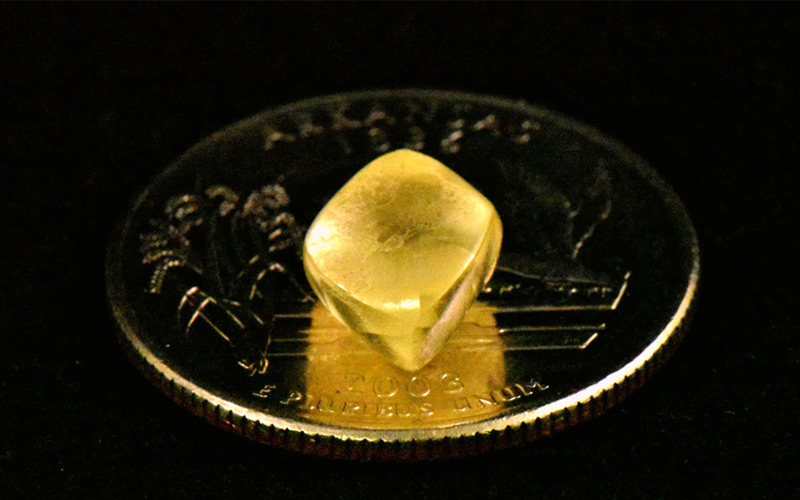 On September 23 Crater of Diamonds State Park gifted a visitor with its latest diamond of notable size and color. This 4.38 carat yellow fancy colored crystal is one of more than 75,000 diamonds found by lucky visitors since the first were discovered there in 1906, by a farmer who previously owned the land.

Noreen Wredberg – a park visitor from Granite Bay, California – found the yellow crystal within an hour of searching. Noreen had started searching a shaded area near the mine’s entrance, but it was a cool morning so her husband suggested they move into a field where it was warmer. After about 40 minutes she spied the yellow crystal.

“I didn’t know it was a diamond then, but it was clean and shiny, so I picked it up!”

Of 353 diamonds found at the park in 2020, a total of 26 were found found on the surface, including this 9.07 carat brown crystal discovered on 09/07. Historically, many of the park’s largest diamonds have been spied on top of the ground. Groundskeepers plow sections of the park to facilitate erosion, particularly after heavy rain, and when the sun comes out the reflective crystals can become highly visible.

According to Park Official Waymon Cox:

We plow the search area periodically to loosen the soil and promote natural erosion. Diamonds are somewhat heavy for their size and lack static electricity, so dirt doesn’t stick to them. When rain uncovers a larger diamond and the sun comes out, its reflective surface is often easy to see.

As of the date of Noreen’s discovery a total of 258 diamonds were registered at Crater of Diamonds State Park in 2021, weighing more than 46 carats in total. An average of one to two diamonds are found by park visitors each day.

Crater of Diamonds State Park is located on Arkansas Highway 301 in Murfreesboro. It is one of 52 state parks administered by Arkansas State Parks, a division of the Arkansas Department of Parks, Heritage, and Tourism.

Some Clarity on Diamond Clarity