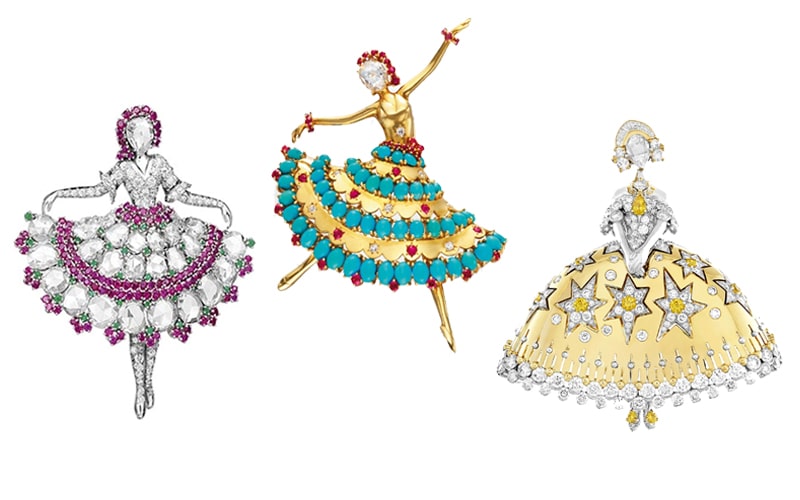 Van Cleef & Arpels‘ iconic ballerina clips danced onto the American stage in the early 1940s. They were immediately embraced by the public, who saw them as refreshing symbols of joy and hope during the uncertain days of World War II.

We could all use a bit of joy and hope right now, so let’s revisit some of these beautiful jewels.

French dancer Marie Anne de Cupis de Camargo dazzled eighteenth-century audiences with her stunning technique, and strength. Known as La Camargo, she became famous for moving the art form from heeled shoes to slippers and shortening her ballet skirt to what ultimately became the regulation length, permitting the audience to fully appreciate her grace and talent. La Camargo Dancing was painted by French artist Nicolas Lancret in 1730.

The Van Cleef & Arpels ballerina brooch created in 1942 was crafted as a tribute to La Camargo. Made with diamonds, rubies and emeralds set in platinum, the piece was owned and cherished by Marjorie Merriweather Post.

Anna Pavlova was a Russian ballerina of the late 19th and the early 20th centuries who rose to become principal artist of the Imperial Russian Ballet. Most recognized for her creation of the role of The Dying Swan, which she performed an estimated 4,000 times, she became the first ballerina to tour around the world. Popular photos of her curtsy inspired another 1940s ballerina brooch composed of platinum, diamonds, rubies and emeralds, this time in Anna’s honor.

Over time, Van Cleef & Arpels’ jewelry inspired a relationship of shared appreciation between Claude Arpels and choreographer George Balanchine, styled as the father of American Ballet. As Mario Fasel describes in an Averturine article, their relationship culminated in a 1967 ballet entitled “Jewels.”

Before the 1967 premiere of the Jewels ballet in New York City, dancer Suzanne Farrell and legendary choreographer George Balanchine went to Van Cleef & Arpels to meet the press. The boutique was the perfect place to publicize the new production. Claude Arpels, a founder of the firm and his brother Pierre Arpels were friends of Mr. Balanchine and ballet enthusiasts.

At the time, some journalists reported that Claude Arpels had suggested the idea of a ballet based on jewels to Mr. Balanchine. Other stories said the choreographer’s daily walks on Fifth Avenue by the Van Cleef & Arpels window-display of treasures ignited the idea for the ballet. Yet there could have been another source of inspiration that did not get reported by the press.

The ballet in three acts—Emeralds, Rubies and Diamonds—might very well have been inspired by Van Cleef & Arpels ballerina brooches. The illustrious choreographer of the New York City Ballet was familiar with the jewelry. He had even bought reportedly bought a ballerina brooch around 1944 depicting his wife Vera Zorina in an arabesque. – Mario Fasel

Emerald, rubies and diamonds, indeed. And so we revisit the origins of these pieces. Created in 1941, the Danseuse Espagnole ballerina was among the first in the historic Van Cleef & Arpels movement, adorned with the very gemstones Balanchine would name as the movements in his ballet.

For 80 years dance has continued to inspire the maison’s pieces. The ballet continues, with new performers appearing in various collections, taking ever-inspiring and creative forms. This distinctive lady, made with turquoise, gold, diamonds and rubies, was sold in a 2010 auction by Christie’s New York for $80,500. 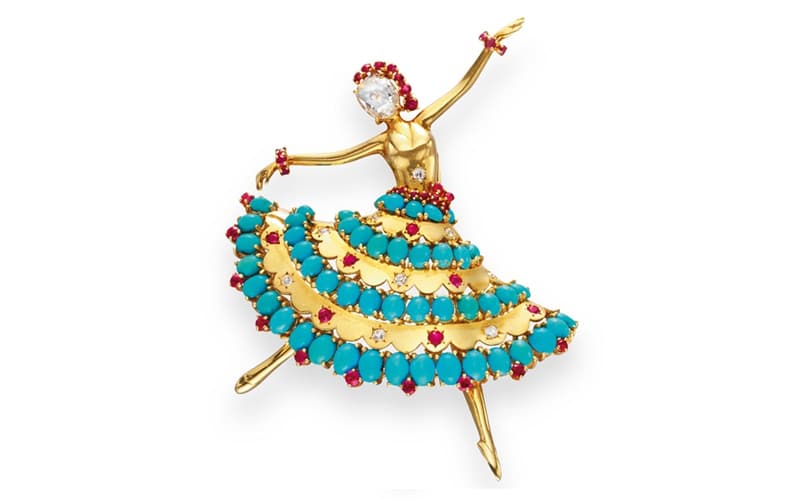 Another auction sensation was this matching ballerina brooch and earrings, sold at a 2015 Christie’s event in Geneva for nearly $240,000.

In 2018 a new collection inspired by Grimm’s Fairy Tales produced a distinctly different dancer. “Princess Danica” was fashioned in gold, diamond and yellow sapphire. But wait. The dancer is not in motion. She’s standing still. Why?

She is patiently awaiting a dancing partner.

Inspired by an Alexander Pushkin story, this versatile brooch can be worn as a ballerina in a gown of sapphires, spessartite garnets and diamond. Or the top half can be rotated, transforming the ballerina into a beautiful swan surrounded by diamonds and colored sapphires, floating in a diamond and sapphire lake.

Now you have seen how dance inspired jewelry and jewelry inspired dance. May the music of joy and hope play on, and on.