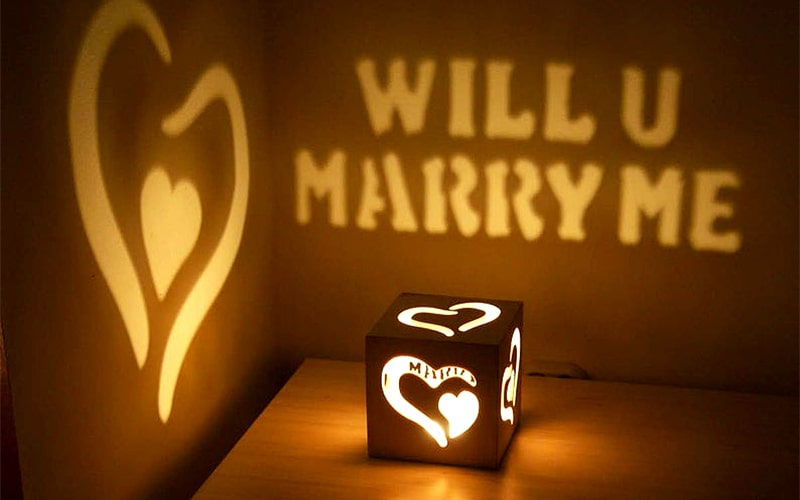 We have all adapted to the new normal in different ways. We’ve all accepted the fact that quarantine puts a stop to some things entirely and creates the need for other significant events to be postponed (see you next year, Lady Gaga).

There’s an ongoing silver lining to our 2020 situation, however, and that is human adaptation. Human creativity. The indomitable human spirit. In some cases it manifests in clever comedy, as with Ted and Ed, “The Moor Bears” in Stockport, England, staged by their owners in various scenes each day to the delight of their neighbors.

In other cases, people are finding ways to forge ahead and carry on their most significant moments.

The stories of beautiful, creative 2020 wedding proposals are ongoing. This is something to celebrate. Something to share and spread. The adaptive, creative spirited marriage proposals being reported these past months are uplifting. I thought it would be nice to “share and spread” some of that joy here.

Michael Goldstein had proposal plans in mind which were thwarted by travel restrictions. He converted that setback into a fresh opportunity when his lady “proposed” a hike up a mountain. Little did she suspect her proposal would result in “the” proposal!

I had never hiked a mountain in my life, but thought this would be perfect — and since it was her idea, she would never suspect the proposal. After two and a half hours up a steady ascent filled with deep anxiety of dropping the ring, we arrived at the summit. I scanned the very small group at the summit for someone who looked like they knew how to operate a phone and asked her to take a photograph of us. As we were beginning to pose for the photo, I turned and said “I have something to ask you first.” At this point, I dropped to one knee and asked her to marry me. Overwhelmed with joy and tears, she said yes! – Michael Goldstein

PJ Bruno wanted to share the moment of his proposal to girlfriend Jaz with friends and family. Without her knowledge he sent a Zoom invitation and set things in motion so that an audience could witness the moment he popped the question. You can see the video here.

In the midst of global chaos, PJ managed to find a way to gather our closest friends and family to create one of the most magical moments of my life. Thank you to everyone who took part in our special day from the safety of your homes. We love you so much. When this is all over we’re going to hug and cheers and laugh together. – Jaz Zepatos

Luke McClung had grand plans for a Paris proposal but was forced to cancel the trip due to travel restrictions. Fortunately, Luke is a graphic designer. He applied his talent in a most creative way, chalking the Eiffel Tower onto a wall in order to create Paris in Virginia.

The story got enough attention that it was mentioned on John Krasinski’s show “Some Good News” (SGN). This is a show worth checking out, as it simply features “stories that make you feel good and things that make you smile.”

Get busy in the street

Angel Garza decided to take advantage of the current situation to do the normally-unthinkable. Downtown Fort Worth, Texas, is usually as bustling as it is picturesque. Garza employed wedding photographers to capture the moment preserved below, apparently just before the big surprise question.

Alyssa, you exceed every beautiful picture I’ve ever prayed, dreamed and imagined. Thank you for choosing me. Thank you for starting this new and perfect journey by my side. – Angel Garza

The story of a lifetime

One thing will connect these creative souls, and everyone who is going forward with proposal and wedding plans in 2020. This will be a story they can pass on to all future generations of their family. The story of how nothing in the world could stop the forward momentum of love.