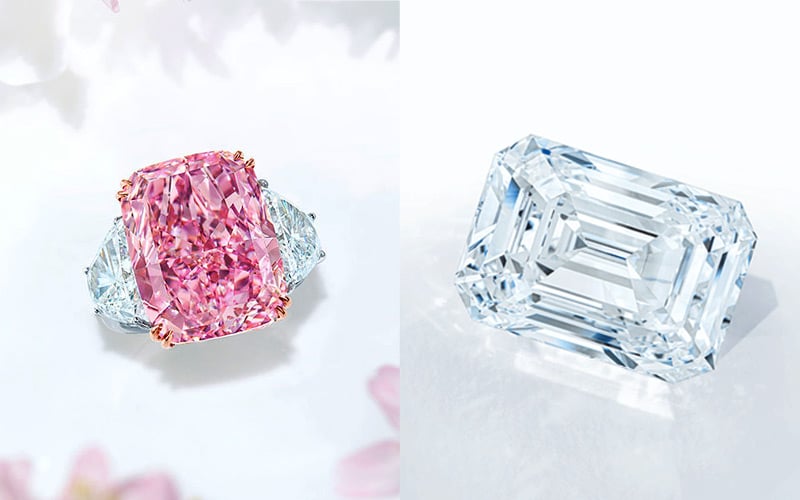 From Switzerland to Hong Kong, Christie’s Magnificent Jewels auctions have had a merry month of May, posting record sales of diamonds and iconic jewelry creations, with results from Hong Kong exceeding those of any Christie’s jewelry sale for the past four years.

A Spectacle in Geneva

Among the items sold was a jewelry set belonging to the adopted daughter of Napoleon I, Stephanie de Beauharnais – the Grand Duchess of Baden. This nine piece parure included a tiara, a collier, a pair of earrings, two pendants and brooches and a ring and bracelet. These jewels, along with the sapphire crown of Maria II, Queen of Portugal, accounted for $3.6 million of the event’s earnings.

The star of the Swiss show, however was the 100.94 carat Alrosa Spectacle Diamond which commanded $14.2 million, meeting its pre-auction estimate of $13-19 million The largest diamond ever cut in Russia, this internally flawless emerald cut was fashioned from a rough crystal weighing 207.29 carats. Unearthed in 2016 at the Zarnitsa deposit, the first diamond deposit ever discovered in Russia, the process of planning and cutting the diamond took more than one and a half years.

Over the past 10 years, Christie’s has only sold outstanding D colorless diamonds of comparable size for sale twice, both times also in Geneva – as part of the Magnificent Jewels auction. In 2013 the 101.73 carat Winston Legacy diamond was gaveled at $ 26.7 million and in 2017 the 163.41 carat Art of de Grisogono Creation I was sold for $ 33.7 million.

In an encore performance, the Hong Kong auction last weekend brought almost 60 million Hong Kong Dollars, or $76.8 million. That figure marks the largest sales total of any Christie’s jewelry sale for the past four years. Among the Magnificent Jewels sold was the Sweet Heart diamond, a 4.19 carat fancy vivid pink VVS1 heart shape which brought in $6.6 million, or $1.6 million a carat, reaching it’s pre-auction estimates.

The buzz of the auction, however, was the 15.81 carat Sakura diamond. Sold to a private buyer, the gavel fell at $29.3 million, reaching the Sakura’s pre-auction estimate and setting the world-record auction price for any purple-pink diamond. At $1.9 million a carat, the cushion-cut stone also became the most valuable diamond sold at auction so far in 2021 – a testament to its rarity. When discovered, only one in 10 natural pink diamonds weighs more than 0.20 carats.

Unlike other fancy colors, the unique coloration of pink diamonds is caused by distortions in the crystal lattice resulting from intense heat and pressure during their formation. Where most pink diamonds have inclusions, the Sakura was judged to be Internally Flawless.

According to Christie’s, the fancy vivid purple pink color grade perfectly described the diamond’s display of strong saturation and remarkable pink hue, with a secondary color of purple, resembling the fascinating color of cherry blossoms. ‘Sakura’ is the Japanese word for cherry blossoms that bloom for a very short period at the beginning of spring, making the timing of the sale serendipitous, and the blooming results appropriate.