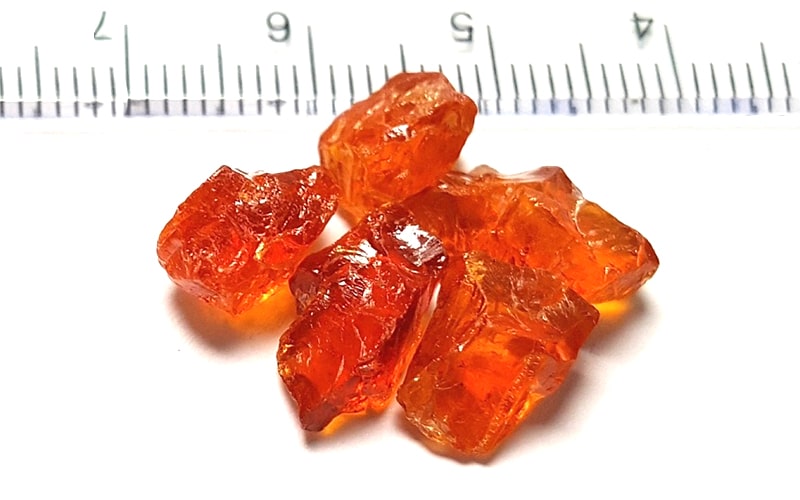 It’s doesn’t quite sizzle, does it?

“Fire Spinel” is far more electrifying, and that’s how it’s named in Bangkok gemstone shops. But Clinohumite, by any other name, is still Clinohumite.

Chemically speaking, this unusual component of the humite group is nothing but a hydrated olivine (clinohumite, I mean) – a hydrate magnesium iron silicate formed after contact metamorphism occurring between igneous and limestone rocks. Honestly, it’s nothing like a real spinel, which is composed of magnesium aluminum oxide (MgAl2O4), created by regional metamorphism or contact metamorphism in limestone rocks or crystalline schists. This is only to make things clear from a chemical and geological point of view.

The Steak beneath the Sizzle

With these qualities, you can avoid having to worry about typical inclusions, but if you’re an inclusion-freak, here you go: The two-phase negative crystals, unidentified crystal groups, polysynthetic twinned crystals and straight color zones in clinohumite have nothing to do with the typical parallel rows – arranged according to the host crystal’s crystallographic directions – of octahedral magnetite and hercynite crystals in natural spinel. I will spare you the trouble of reading ruminations about the crystal system: clinohumite is monoclinic, while a spinel is monometric or cubic.

Quite rare in nature, a “Fire Spinel” can be a real “gem” when it comes in bright yellow-orange colors – as well as brownish/yellowish shades, especially when it is beautifully transparent. Considering that it is most commonly found together with spinel, in three places – with highest quality from the Pamir region of Tajikistan, in a ratio of 1 to 100, similar deposits in the Taymyr region of Northern Siberia and more recently discovered on the Mahenge Plateau of Tanzania – and that…like it or lump it…those are the only places it can be supplied from – would you be surprised if they could shoot you in Bangkok for cut gemstones ranging from $220 to $2,000 per carat (!) depending on their color, quality and size?

Because clinohumite from these sources are a rarity for collectors. Because we are talking about one of the rarest collector gems worldwide. And the chances are quite high that the deposit in Pamir (which was only discovered in the 1980s) and the Siberian deposit (found in the first decade of 2000) will soon be exhausted of these sporadic trinkets. And if I remembered that clinohumite was discovered for the first time in 1876 on Mount Somma, a complex of the Vesuvius, near Naples, and that Great Mother Earth did its best in this area except for gem production quality, I would be biting my hands.

How the gemstone Color Universe works