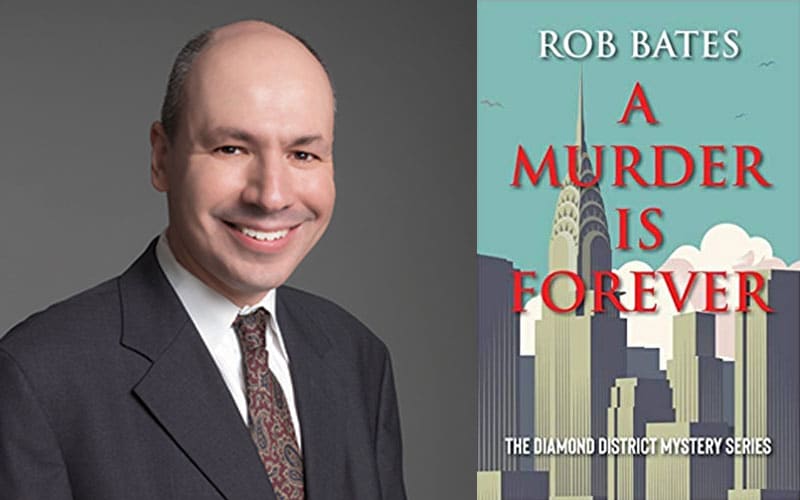 Now, drawing on his wealth of knowledge and experience involving the worldwide trade of gemstones and jewelry, Rob has created a fun, fictional work… A mystery novel entitled “A Murder Is Forever.”

A series of mysteries

This title will not stand alone. We can look forward to more in the future. In fact Rob says he’s close to finishing a second installment in this glamorous genre, all intended to be family friendly as well as engaging (see what I did there?).

According to Emili Vesalind’s coverage on JCK Online:

In the case of A Murder Is Forever, the protagonist is Mimi Rosen, an unemployed journalist who goes to work for her father’s gem company. There’s friction between Mimi and her father from the get-go, but things really go sideways when her diamond-dealer cousin, Yosef, is murdered, seemingly over a $4 million pink diamond. The already fast-paced narrative absolutely flies from there, as Mimi discovers the gem is pivotal in a scandal involving bribery and murder—and her family.

The novel showcases Bates’ knack for constructing (and at JCK, distilling) gripping narratives that are free from clutter and distraction. Known in the industry and gem journalism circles for his lack of bias and rejection of sensationalism, he says he wanted to show that the Diamond District is filled with normal people doing normal things. But he stresses the backdrop is just a jumping-off point for the novel. – Emili Vesalind

Rob acknowledges that there’s a crime involved, but states that it’s not any kind of portrait of the diamond and jewelry business.

It’s not a portrait of the trade. It’s just my impressions of how it is. It’s an industry; it’s people going about their daily lives. Although, it has certain quirks that people outside the industry might not know about. – Rob Bates

Rob named two of the primary characters after his late mother, Mimi, and grandfather, Max Grajower. But he stated that the naming of these characters were tributes, not reflections of who they were as people.

Rooting for the home team

Anyone who has followed diamond, gems and jewelry industry news has benefitted from Rob’s long-time, significant contributions. In that spirit, here’s hoping the series is wildly successful.

For those of you seeking a suitable gift for the holiday season, Rob’s book is available via pre-order on Amazon.