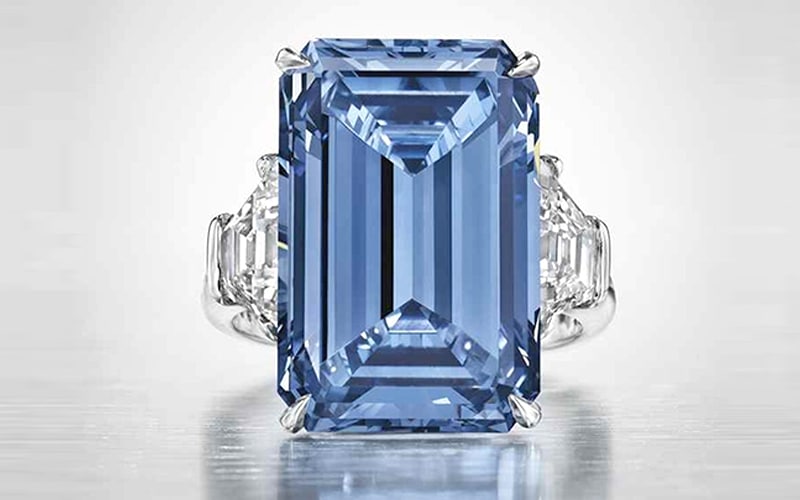 Maynard Ferguson had a different blues in mind when composing his jazz masterpiece for the 1993 album “It’s My Time,” but the title seems appropriate here, and serves to set a mood.

Blue diamonds have a special appeal and character all their own. Like the call and response motifs which characterize blues jazz, blue diamonds seem to call out to each other in their individual but harmonious combinations of hue, tone and saturation.

Click play above to enjoy the creative musical blues of this jazz master, while we wander among seven noteworthy “blues” from the diamond world: One for each note of a seven-step diatonic jazz scale in music.

Our first blue is this fancy vivid blue pear shaped Zoe diamond weighing 9.75 carats. Named after the daughter of Hong Kong billionaire Joseph Lau. It sold at auction in 2014 for a whopping $32 million.

The Star of Josephine

Named after Joseph Lau’s other daughter, the 7.03 carat fancy vivid blue Star Of Josephine was purchased by the real estate mogul for a sum of $9.5 million. Formerly known as the Cullinan Blue, “Josephine” was cut from a 26.58 carat piece of rough discovered at the Cullinan Diamond Mine.

It may come as music to your ears that Mr. Lau likes to acquire high ticket gems and jewelry as gifts for his beloved daughters.

Sold by Christie’s in 2014 for $24 million, the purchaser of this 13.22 carat fancy vivid blue Internally Flawless pear shape was none other than Harry Winston. The all-American jeweler is appropriately mentioned in this collection. The USA is the birthplace of blues music, after all.

The Wittlesbach-Graff Diamond was originally the Wittelsbach Diamond, which weighed 35.56 carats. Acquired by Laurence Graff for $21 million in 2008, the diamond was re-cut to remove flaws, finishing as a 31.06 carat deep-blue diamond with Internally Flawless clarity. Graff made quite a windfall after the improvement, selling the diamond to the former emir of Qatar, Hamad bin Khalifa, for a rumored $80 million. The story comes with controversy, as some perceived Graff as forever altering an already-historic stone.

Originally known as the Tereschenko Diamond, the Mouawad Blue is a Fancy Blue pear shape, and the second-largest blue diamond in the world, exceeded only by the famous Hope Diamond. It weighs a staggering 42.92 carats. Its deep color, captured in a magnificent photo against a dark background here, is a soft, cool counterpoint to the many diamonds captured on light backgrounds.

Staying with our cool, dark theme, the Blue Heart Diamond is on display at The Smithsonian. Unearthed at the Premier mine in South Africa in 1908, the original rough crystal weighed over 100 carats. The object of great attention over the years, this distinctive 30.62 carat blue diamond passed through the hands of Pierre Cartier, Van Cleef & Arpels and Harry Winston, among others. Marjorie Merriweather Post, its last private owner, purchased the Blue Heart from Harry Winston and generously gifted it to the National Gem Collection in 1964. Assessed with a clarity grade of VS2, The Blue Heart’s distinctive natural deep fancy blue color is caused by trace amounts of boron.

You can read about other famous heart diamonds in this prior post, suitable for sending to your sweetheart.

Our final scale-step takes us back to lighter backgrounds and an unexpected twist – or polishing direction, as it were. Named in honor of Sir Philip Oppenheimer, one of the original owners of DeBeers’, the Oppenheimer Blue is a Fancy Vivid blue diamond weighing 14.62 carats. At the time of sale by Christie’s for $58 million in 2017 it set the record for the most expensive piece of jewelry ever sold.

And, like the unpredictable seventh-step in a jazz scale, it’s the only member of our collection here which is an emerald shape, faceted in the step-cutting style. Surprise!

Will a feather EXPLODE my diamond?