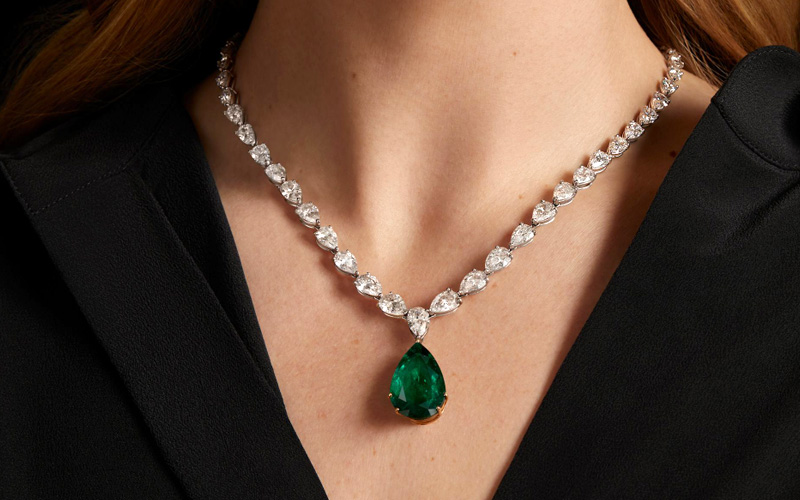 A Celebration of Brands

A total of 201 lots were offered at the September event, including pieces from celebrated brands such as Boucheron, Buccellati, Bvlgari, Cartier, Chanel, Chaumet, Graff, Mauboussin, Moussaieff, Piaget and Van Cleef & Arpels, among others. According to Emily Barber, Bonhams’ head of jewelry in the U.K. –

The 200-lot sale represented a broad range of jewelry styles from 18th- and 19th-century antique examples, exquisite art deco jewels, mid-20th century pieces by heritage brands as well as superlative diamonds, colored gems, and natural pearls. Interest was global, with bidders converging from Asia, the USA, and Europe. The strong selling prices illustrate the strength of the jewelry market across all categories, with many of the top lots secured after spirited bidding by private collectors.

The emeralds are suspended from pear-shaped diamonds weighing 1.25 and 1.18 carats, respectively, via a brilliant cut diamond knifewire link.

This double-clip/brooch, circa 1930, displays the Henri Picq’s maker’s mark. His workshop in Paris produced many of Cartier’s “Tutti Frutti” creations. Measuring 6.2 cm in length, it sold for a final price of £85,980.

This Van Cleef & Arpels creation, circa 1930s, sold for £28,020. Measuring 8.4 cm in length, it’s decorated with brilliant, old brilliant and single-cut diamonds, along with circular-cut rubies and sapphires, and cabochon and sugarloaf emeralds.

These chandelier design earrings feature square and single-cut diamonds in pavé, collet and calibré settings, along with a fringe of baguette-cut diamonds.

Each terminates with a single natural saltwater pearl drop with white and grey tint, respectively, capped by rose-cut diamonds. With lengths of 4.0 cm apiece, the pair sold for £120,000.

The 2022 London Jewels auction took place at Bonhams London, New Bond Street on 21 September. See all of the lots and their details on the Bonhams’ website.