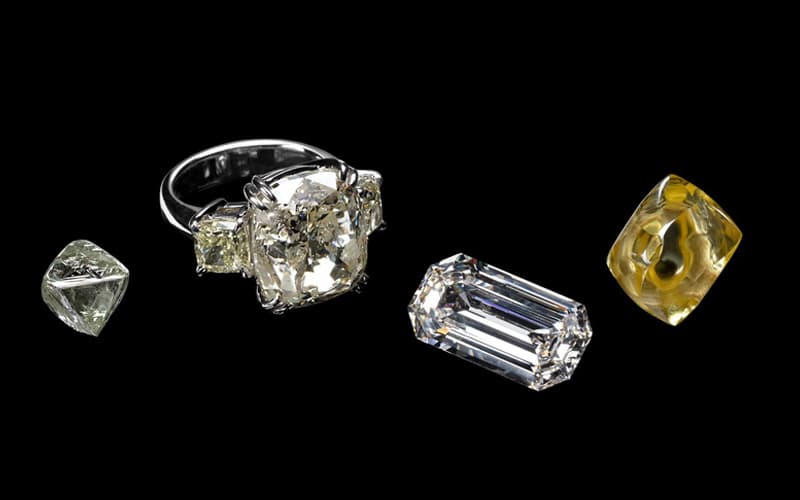 A new exhibit has been unveiled at the Smithsonian’s National Museum of Natural History. “Great American Diamonds,” features four of the most significant diamonds found in the United States.

The collection was sourced from the only two diamond mines that have operated in the United States: Arkansas’ Crater of Diamonds and Colorado’s Kelsey Lake Mine. Together, these sites have produced tens of thousands of carats of rough diamonds.

The Uncle Sam Diamond is a 12.42 carat pinkish-brown emerald cut, fashioned from the largest rough diamond ever found in the United States.  The original 40.23 carat crystal was discovered at Crater of Diamonds, Murfreesboro, Arkansas in 1924.

The Freedom Diamond is a 16.87 carat cushion cut. It was cut from a 28.18-carat diamond crystal mined at Kelsey Lake, Colorado, in 1997. It is the largest known faceted diamond the United States has ever produced.

The Canary Diamond is a 17.85 carat uncut golden-yellow rough diamond crystal unearthed at Crater of Diamonds in Murfreesboro, Arkansas. It’s another of the largest uncut diamond crystals recovered in Arkansas. It was discovered in 1917 and later sold by the Arkansas Diamond Company to Washington Roebling, whose mineral collection was donated to the Smithsonian in 1926.

Mineralogist Jeffrey Post, the museum’s curator in charge of gems and minerals, discussed the patrons’ reaction to the new exhibit, and the generosity of the donors.

Most people are surprised to learn that diamonds have been mined in the United States, and as the national museum, we are delighted to introduce these great American diamonds to our visitors. Amazingly, the Uncle Sam and Freedom diamonds were donated to our national collection within a month of each other. The generosity of the donors ensure that these great Earth treasures will forever belong to the people of the United States, and the world.

Find a Diamond Yourself

The Kelsey Lake site in Colorado closed in 2001, but diamond prospecting still takes place in Arkansas where the Uncle Sam Diamond was found. In fact the site was refashioned into a state park that manages one of the world’s only diamond-bearing sites accessible to the public. Each year, visitors discover and get to keep roughly 600 new diamonds, potentially unearthing the next “Great American Diamond.”

Crater of Diamonds State Park is located on Arkansas Highway 301 in Murfreesboro. It is one of 52 state parks administered by Arkansas State Parks, a division of the Arkansas Department of Parks, Heritage, and Tourism.

The French Blue, a story of travel, treasure and diamonds