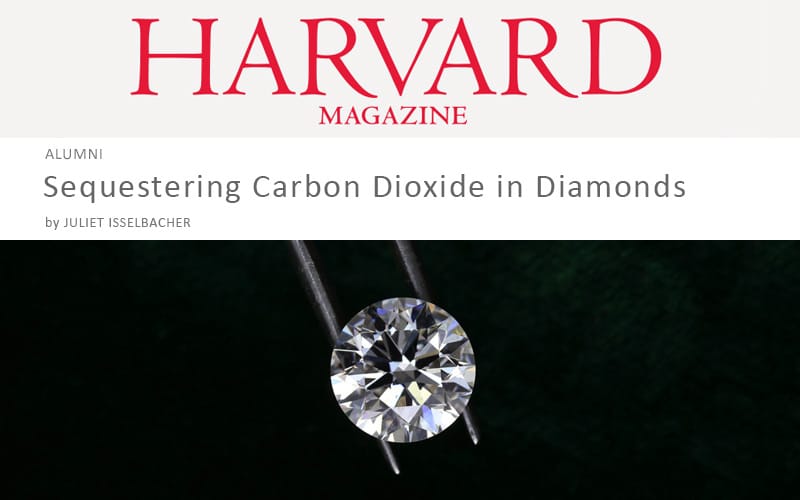 Sequestering Carbon Dioxide in Diamonds, also tagged as “diamonds from the air,” begins by noting Hagemann’s environmental awareness from an early age and continues by describing his use of a Harvard Business School education, along with time spent consulting with luxury icons Chanel, Tiffany and Lamborghini – as well as tech leaders such as Google and Apple – to develop a product that conscious consumers can be “proud about wearing.”

I always have been very in touch with nature and the planet and the impacts that my choices – and other people’s choices – can have. – Bob Hagemann

Aether Diamonds draws the carbon for its diamonds from the atmosphere, converting greenhouse gas into hydrocarbon methane. These materials are used in a process known as chemical vapor deposition whereby, over a period of three to four weeks, the carbon atoms are crystallized into gem quality diamonds. The company’s reactors are powered by sustainably sourced energy. As described in the article:

The distinction between Aether diamonds and their natural counterparts is neither optical nor chemical – they are certified by the International Gemological Institute and held to the same standards as mined diamonds – but rather ethical.

Hagemann says his goal is to turn Aether Diamonds into a carbon negative company by 2023, by harnessing renewable sources of wind and solar power and sending energy back to the grid.

In addition to giving consumers a different or new reason to want a diamond, Hagemann would like to see more players in the diamond industry embrace the concept of trapping emissions for carbon and moving toward sustainability. To that end, he noted that Aether would be willing to license its technology to other companies.

Our goal, despite the fact that we do have these [patent] protections in place, is to allow the diamond industry to grow and progress, and we are more than happy to license out that technology and those capabilities to brands who want to follow in our footsteps. – Bob Hagemann

Others in the Sky with Diamonds

While the Harvard Magazine piece identifies Hagemann’s company as the first to fashion certified, gemstone-quality diamonds out of air, Hagemann is not the only player. Last month WIRED, the popular tech-lovers’ magazine published an article titled “The best sustainable gear to save the planet”  – a piece about eco friendly products, – which included a United Kingdom company founded by Dale Vince called Sky Diamonds.

Proclaimed clean technology by The Guardian in October, 2020, the company’s rough diamonds are synthesized using carbon dioxide captured directly from the atmosphere, water collected from rainfall and solar and wind-generated electricity. Once polished, they are also sent to IGI for certification. From the article in WIRED:

Below are eight of these lab-grown stones, each (certified) by the International Gemological Institute and with the same chemical and physical properties as mined diamonds… By using only renewable energy, carbon and rainwater, these are by far the most sustainable.

Putting on my opinion hat: There’s no doubt that what visionaries like Hagemann and Vince are doing is cutting edge, admirable and just plain cool. Honestly, taking pollutants out of the air and converting them to gem-quality adornments – sustainably – with carbon negative potential is fascinating and awesome.

With that said, it’s disappointing that reporters covering these stories habitually use them to disparage the natural diamond trade. Lab grown diamonds certainly deserve coverage. Their beauty, affordability and controlled growth conditions have undeniable appeal. The natural industry is viable as well, with socially and environmentally conscious initiatives in place and ongoing since the 1990s. More importantly, revenue from natural diamond sales sustain tens of millions of people in some of the world’s most remote areas. Summarized, it’s positive for our industry that lab grown and natural diamonds both have distinct value propositions for end consumers to consider.