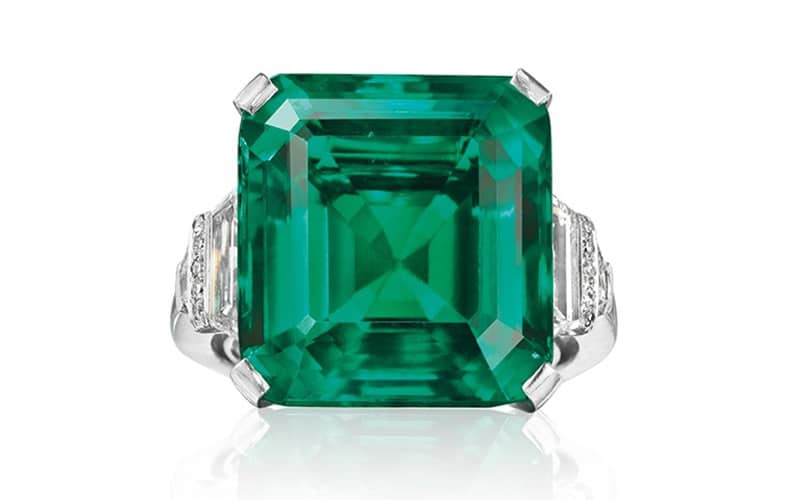 Congratulations, May babies, for another trip around the sun. Whether you’re a loyal Taurus, a charming Gemini, or a dash of both, we celebrate your birth month for transitioning the northern hemisphere from spring into summer.

The Verdant Month of May

Legend tells us that May named for the Maia, the Greek goddess of fertility. The Mayflower is the North American harbinger of May and the floral emblem of Massachusetts and Novia Scotia. The Hawthorn and the Lily of the Valley, blooming across the northern world, are this month’s birth flowers.

How appropriate, then, that the birthstone of the verdant month of May is green. Thought to represent tranquility, health, fortune and jealousy (hello again, Taurus), green is a universal symbol of nature and the natural world, and the vibrant color of emeralds.

Since May is the fifth month of the year I thought it appropriate to visit five of history’s most notable and valuable emerald jewels, beginning with the most expensive emerald piece ever sold at auction and finishing with, perhaps, the most historic of all time.

Which is your favorite?

According to Richard Burton ‘the only word Elizabeth [Taylor] knew in Italian was “Bulgari”’. During the filming of Cleopatra, Burton visited the Bulgari boutique in Rome, where he purchased this emerald and diamond brooch as a wedding gift for his fiancée. Worn by the actress at their marriage in 1964, the brooch was later sold in The Collection of Elizabeth Taylor: The Legendary Jewels Evening Sale at Christie’s in New York in December 2011. It realised $6,130,500, and remains the most expensive single stone emerald jewel ever sold.

In 1930 John D. Rockefeller, Jr. purchased a brooch for his wife, Abby Aldrich Rockefeller. The brooch, said to be by Van Cleef & Arpels, centred upon a large emerald with mesmerising colour and impeccable clarity. When Abby Aldrich Rockefeller passed away in 1948, Rockefeller turned to Yard to disassemble the brooch, and individual emeralds from the setting were distributed among the Rockefeller children. The centre emerald, weighing an impressive 18.04 carats, was given to David Rockefeller, who commissioned Raymond Yard to mount it as a ring. The Rockefeller Emerald was offered by Christie’s in the summer of 2017 and was purchased by Harry Winston for $5,511,500, or $305,500 per carat — the highest price per carat ever obtained for an emerald. After the auction, the gemstone was immediately rechristened the Rockefeller-Winston emerald.

The Imperial Emerald of Grand Duchess Vladimir of Russia

This legendary gem weighing 75.61 carats was part of the Russian Imperial collection for more than 100 years before Tsar Alexander II of Russia gave it to Grand Duchess Vladimir in 1874, on the occasion of her wedding to his son, Grand Duke Vladimir Alexandrovich of Russia. After the Grand Duchess’s death in 1920, it was bequeathed to her son, Grand Duke Boris, and then passed through the hands of famous collectors such as Pierre Cartier, the Payne Whitney Family and Raphael Esmerian. Offered at auction by Christie’s in Geneva in May 2019, it was purchased by a private collector for $4.5 million, nearly double its low estimate.

This emerald and diamond necklace was purchased by Princess Faiza of Egypt — King Farouk’s sister — in 1947 at Van Cleef & Arpels in Paris. As well as its exquisite craftsmanship, the necklace’s imposing diamonds are complemented by elegant emerald drops. Auctioned at Christie’s Geneva in November 2013, it was purchased by Van Cleef & Arpels to become an iconic jewel of the house’s heritage collection.

The superb clarity and color of the Chalk Emerald ranks it among the world’s finest Colombian emeralds. This outstanding 37.8-carat emerald exhibits the velvety deep green color that is most highly prized. The finest emeralds are found in the region around Muzo and Chivor, Colombia. These green gems were used by indigenous peoples for at least 1,000 years before the arrival of the Spanish conquistadors in the 16th century. Although spurred primarily by their passion for gold and silver, the Spanish quickly recognized the potential of the exquisite green crystals and took control of the mines. Emeralds became popular among European royalty and were shipped from the New World by the boatload.

The great richness of the Colombian mines led to a glut of emeralds in Europe, triggering a brisk trade of the gemstones to the Middle East and India. The Mogul rulers in India were especially fond of emeralds and encouraged a vast gem cutting and jewelry industry. Many finished pieces were traded back to Europe. According to legend, the Chalk Emerald was once the centerpiece of an emerald and diamond necklace belonging to a Maharani of the former state of Baroda, India. It originally weighed 38.4 carats, but was recut and set in a platinum and gold ring designed by Harry Winston, Inc., where it is surrounded by 60 pear-shaped diamonds totaling 15 carats. It was donated to the Smithsonian by Mr. and Mrs. O. Roy Chalk in 1972 and is on display in the Gem Gallery at the National Museum of Natural History.

Which is your favorite?

Would you dare wear one of these iconic pieces to your birthday bash May babies?