The International Gemological Institute and the University of Naples Federico II, the oldest public non-sectarian university in the world, will collaborate on a presentation at the 3rd National Diamond and Colored Gems Conference in Bari, Italy on Thursday, July 22.

The Conference will take place at the Department of Earth and Geoenvironmental Sciences of the University of Bari “Aldo Moro” in via Edoardo Orabona 4 beginning at 8:00 am the same day. Pre-registration is closed. Participation for those who did not pre-register will be available for a 50 euro contribution fee.

Blue halos and deep diffusion of sapphires with beryllium: a new University research in collaboration with IGI

The oldest among the enthusiasts, and among our students, will certainly remember the great turmoil caused in 2002 by a new heat treatment, based on the diffusion of Be in fancy color corundum. Through it was possible to modify the color of some fancy sapphires, obtaining gems of varieties that were extremely rare until then, such as the well-known “orange” hue typical of the Padparadscha sapphire.

After an initial moment of difficulty, gemology was able to react positively and has established very effective protocols suitable for the detection of this treatment. However, some weaknesses remain in the daily business routine of the gem trade when dealing with supposedly Be-treated material. One of the main reasons is that the detection of this treatment is only available at very well equipped institutes. As a matter of fact, only through the use of LIBS (or even more advanced instrumentation) can the occurrence of beryllium in sapphires and its effect in color change be positively determined.

So what can a student or junior gemologist do if he or she has access just to standard instrumentation resorting to the skills obtained in advanced courses? The attention was focused on Blue Halos, a phenomenon that very often indicates a very high treatment temperature and a possible diffusion of light elements within the corundum. 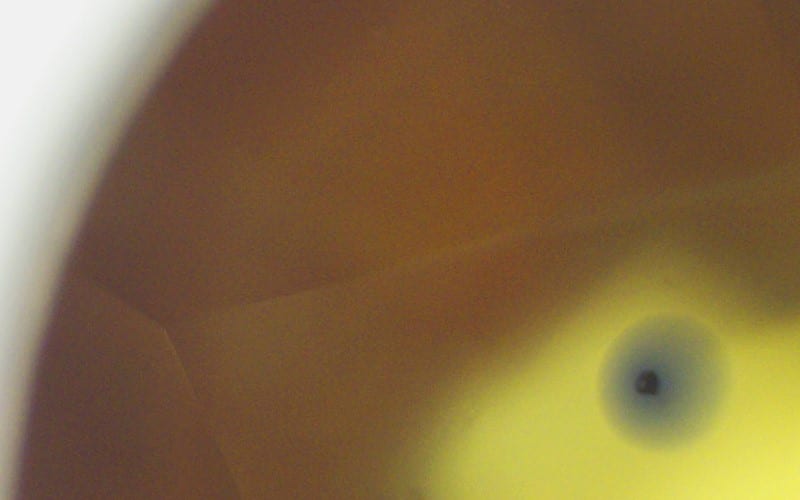 Through its Italian teaching branch, IGI started in 2019 a collaboration with the Italian “Federico II University”, based in Naples, precisely with the Departments of Earth, Environmental and Resource Sciences and Chemical Sciences. IGI and the researchers of the Neapolitan university agreed on the mutual benefits such a collaboration would bring using each other’s skills and experiences. In this perspective, a first work focused on beryllium deep diffusion of corundum was planned.

Beryllium diffused corundums were introduced to the market in different colors about twenty years ago. Emmet et al., in 2003, found that all of the stones diffused with Be from Songea contained rutile crystals and showed a typical internal diffusion pattern consisting of a hexagonal or irregularly shaped crystal surrounded by a spherical blue halo. The blue color contrasted sharply with the yellow, orange, or orange-red color of the body of the stones.

As this was still an uncharacterized and not widely discussed issue, IGI and Federico II University focused on the investigation of the actual causes of this blue halo in sapphires. Forty-three samples of cut gems, whose colors include pink, green, blue, purple, orange, red, and yellow, from Thai manufacturers were characterized. Among them, 14 samples (yellow and orange in color) showed a blue halo and were studied using optical microscopy, micro-Raman spectroscopy, SEM and EDS techniques, and powder X-ray diffraction (PXRD) to obtain more information on the genesis of the blue halo and its inclusion system.

The research will be presented in Bari (Italy) on July 22, 2021, during the 3rd National Conference Diamonds and Colored Stones – Genesis, Provenance and Market Implications, organized by the Department of Earth and Geoenvironmental Sciences of the University of Bari “Aldo Moro”. Manuela Rossi (UNINA) will be introduced by Francesco Sequino (IGI International Gemological Institute; Gem-Tech Institute).

The International Gemological Institute (IGI) has 20 laboratories in all major diamond and jewelry centers around the world, as well as 14 education facilities. For 45 years, IGI has provided the fine jewelry community and consumers with a broad range of services including independent diamond grading reports, colored stone reports, identification and appraisal reports, diamond authentication and attestation of origin, laser inscription services, as well as the issuing of the traditional jewelry identification report. Regardless of location or marketplace, an authentic IGI Laboratory Report is the common language of trust and confidence in the gemological world.

About The University of Naples Federico II

The University of Naples Federico II is the oldest public university in the world. The king’s main purpose was to create an institution of higher learning that would put an end to the predominance of the universities of northern Italy, most notably those of Bologna and Padua, which were considered either too independent or under the strong influence of the Pope.

A foto-feast of four delicious diamonds