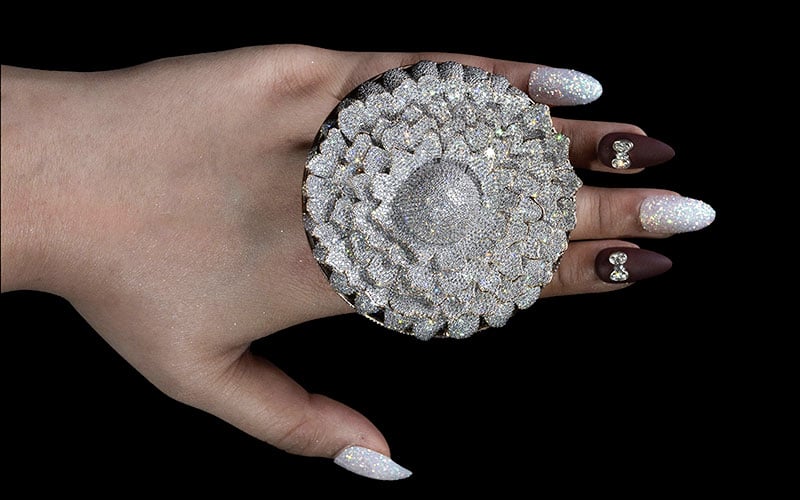 The Ring of Prosperity

The floral-inspired ring called “The Marigold – The Ring of Prosperity” is meticulously set with 12,638 diamonds totaling 38.08 carats, and weighs 5.8 ounces.

Certified by IGI India, the collection of breathtaking round brilliant diamonds used in the piece are all E-F color and VVS clarity, placing them in the elite “collection category” of colorless, nearly-flawless natural diamonds.

As reported in the Times of India:

Each and every diamond was specially tested and all of them are of E-F color and Very Very Slightly Included (VVS) clarity. These are the best qualities of diamond used in jewelry worldwide. The ring is certified by International Gemological Institute (IGI) which is one of the most prestigious labs for diamond jewelry certification globally.

Harshit conceived of this “dream project” in Surat, the diamond hub of India, after receiving his BBA and MBA from SRM University. He was opening his first store when he read about the 2018 Guinness World Record ring with 6,690 diamonds and became determined to surpass it. He always had a target of 10,000 diamonds, considering and discarding many designs and concepts before settling on The Marigold.

I was trying to think about designs for a long time, and eventually found it in my garden. A marigold flower caught my eye and I put it in-between my fingers to see how it will look. It was then that I decided.

Work on the ring started in 2018 and finished in February 2020. A departure from common symmetrical designs, every petal in the ring is created with a unique shape. No two petals are identical, giving the eight-layered piece a perfect blend of organic symmetry, design and alignment.

“A matter of pride”

Harshit’s store, Renani Jewels, is named after his parents Renu and Anil Bansal. Only 25-years old, the young designer was asked for the price of his Guinness World Record setting creation. He replied simply:

We have no plans of selling it right now. It’s a matter of pride for us. It’s priceless.

THE MARIGOLD – The ring of prosperity