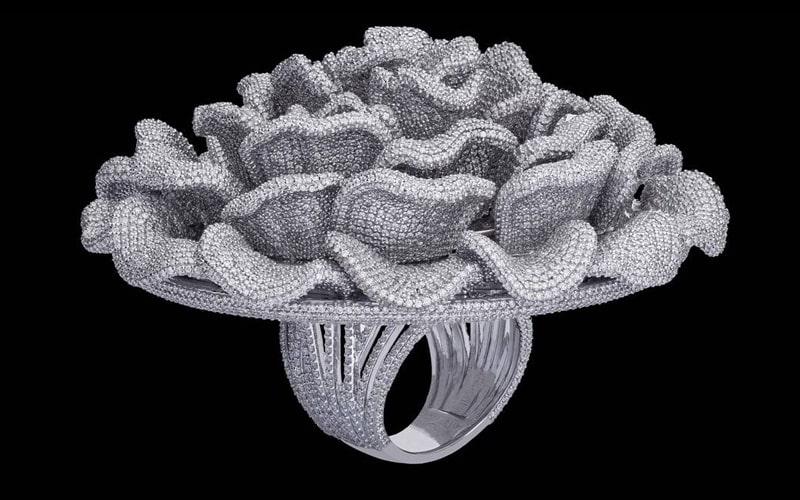 SWA Diamonds of India has produced a ring set with 24,697 diamonds, a new world record. Designed by Rijisha TV, a post graduate in lifestyle accessory design, from the National Institute of Design, the ring has been named ‘The Touch of Ami.’

The word ‘Ami’ means immortality in Sanskrit. The ring’s design was inspired by the pink oyster mushroom, which represents immortality and longevity. SWA Diamonds Managing Director Abdul Gafur commented on the achievement, and noted IGI’s involvement in counting and evaluating the weight, color, clarity and cutting style of all diamonds used in the record-setting piece.

A team of qualified independent diamond experts and jewelry experts evaluated the ring at IGI – International Gemological Institute Lab… It is our privilege and honor that this ring was made in India and also the owner of the ring is an Indian. ‘The Touch of Ami’ also marks the triumph of entrepreneurship in the diamond sector of our state.

Months in the Making

The ring’s fundamental shape and design were created using a plastic mold. SWA Diamonds then worked on a computer aided design (CAD) for nearly three months. After 3D printing and metal casting, each of the 24,679 diamonds was carefully set into the ring by hand.

The finished ring weighs 340 grams and was estimated by SWA diamonds to have a value of $95,000. It has been listed on the Guinness World Records website for achieving the most diamond set in one ring. Abdul Gafur Anadiyan commented:

There is no greater joy than to live your dreams the way you were meant to. Our team feels accomplished and satisfied after knowing we have earned a new Guinness World Records title.