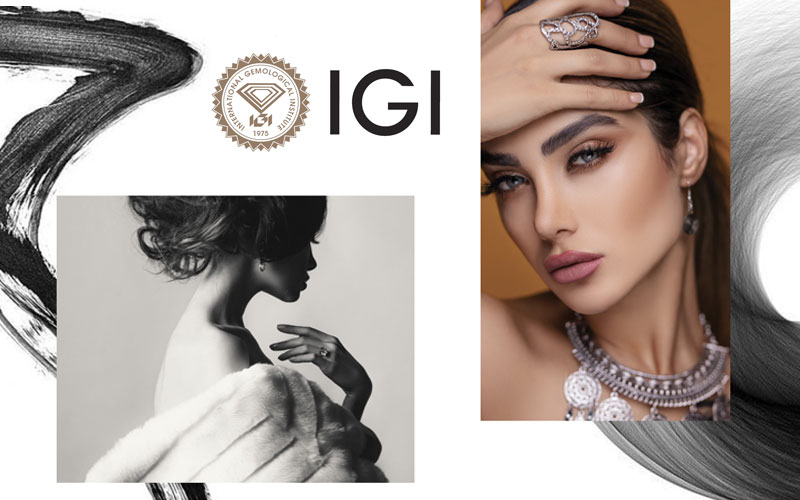 Following a 40 day period of submissions and evaluation, IGI’s international panel of prestigious judges has advanced 30 design concepts to the final round of the 2020 IGI JEWEL Jewelry Design Contest. These creative works, which can be seen below, were selected for creativity, use of materials, budget, feasibility of production and wearability.

IGI, and event partner House of Jewelry Creation will provide resources to bring all of the shortlisted works to life. Once fabricated, all finalist designs will receive exposure on a physical tour of various trade events and expositions, including the China International Import Exhibition, as well as online promotion through a series of professional channels.

Each finalist will receive a Contest Excellence Award trophy, certificate, introduction to the media and a chance to receive support from jewelry brands towards further development. After abundant exposure, the designs will be ranked from perspectives of originality, art, and practicality. The contest will culminate with the naming of one Grand Champion, two Silver Medalists and four Outstanding Design Awards; one for each contest category.

The contest theme, “Collision and Fusion,” implies crystal collision in gemstone growth and stylistic cultural fusion. It also reflects the collision of our shared global experience and the fusion of human adaptation during these unprecedented times.

Listed in no particular order: We proudly present the finalists of the 2020 IGI JEWEL Jewelry Design Contest

1
Name of design: Fusion
Designer: FU Yao Yu
Inspiration：
Eastern and Western civilizations combine the brightest parts of human culture. They impact each other and are intertwined with each other, finally merging in violent collision to achieve balance. 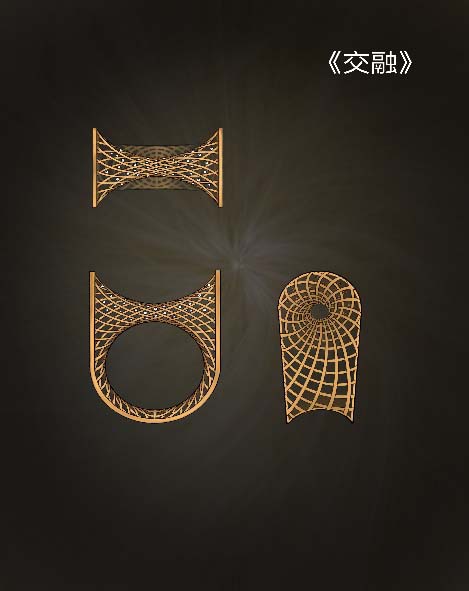 2
Name of design: The Paper Ring
Designer: YUAN Yi
Inspiration：
The design is inspired by the small action of tearing paper. A paper’s plain surface may have a very different texture on the other side after it’s torn – much like evaluating a person not just on the outside, but on the inside. 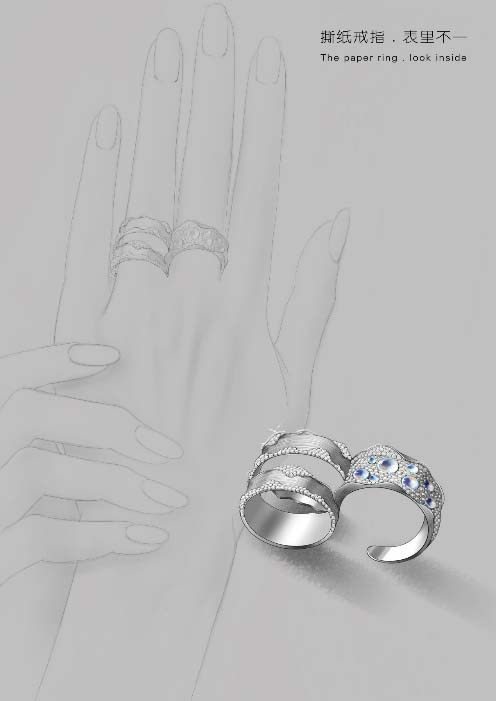 3
Name of design: Extreme
Designer: CHANG Yuan Hsin
Inspiration：
The design is meant to capture the magnificent view of lava pouring into sea water. The moment when boiling lava reaches the freezing ocean reflects the power of nature. While lava and ocean belong to two extremes, they still coexist on our planet, beautifully colliding and fusing along the seashore. 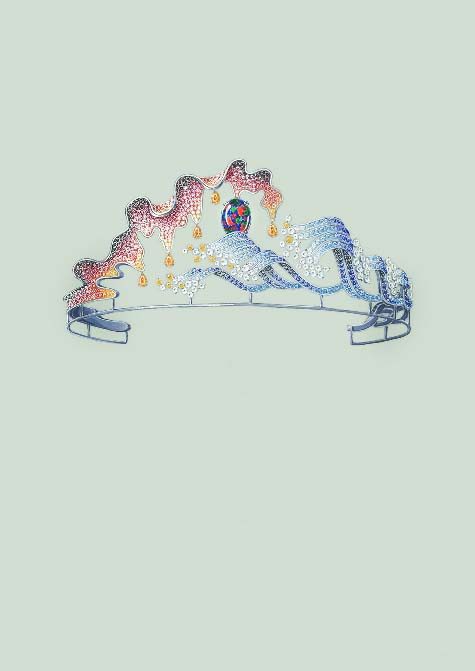 4
Name of design: Life collided in space
Designer: BAGANCORTES Joaquin
Inspiration：
LIFE COLLIDED IN SPACE. This work captures the moment when the nucleus of life collides in time and space. The first step represents the creation of an enigmatic and exciting future project that will be revealed to us soon. 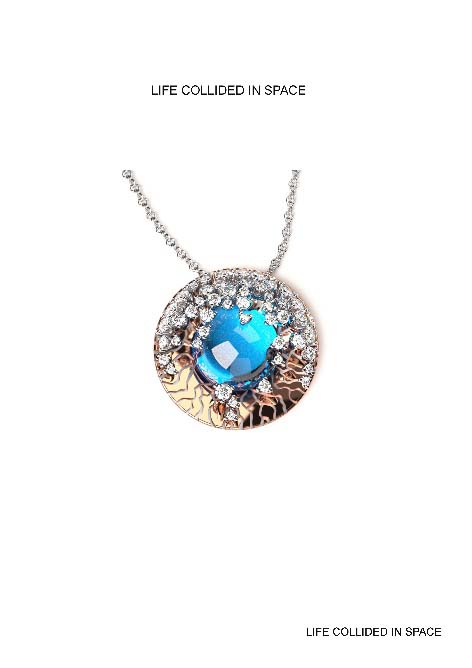 5
Name of design: Star Cloud Sea
Designer: WANG Zi Ting
Inspiration：
Inspired by the mixed beauty of nature emanating from gems, the material represents that moment at dawn when the sky reaches the sea – and the color of natural landscapes grows fiercer and fiercer. 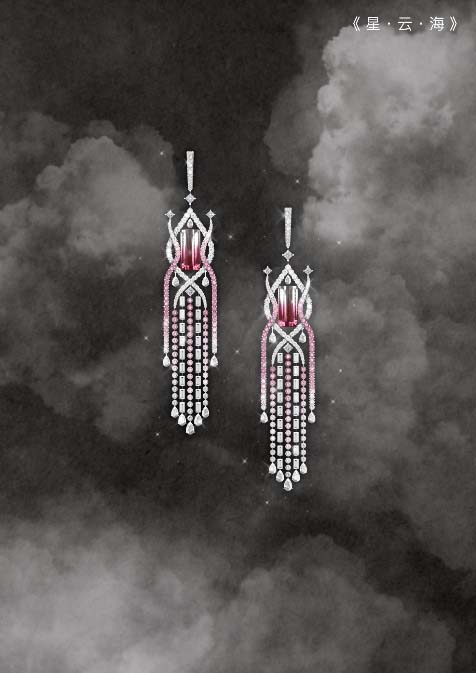 6
Name of design: Civilization
Designer: QIAN
Inspiration：
The journey of our ancestors, whether seeking coexistence or prosperity, has been very difficult. It has taken many generations, but their steps forward have never faltered. This small but tenacious journey ultimately makes us a civilization beyond ourselves. 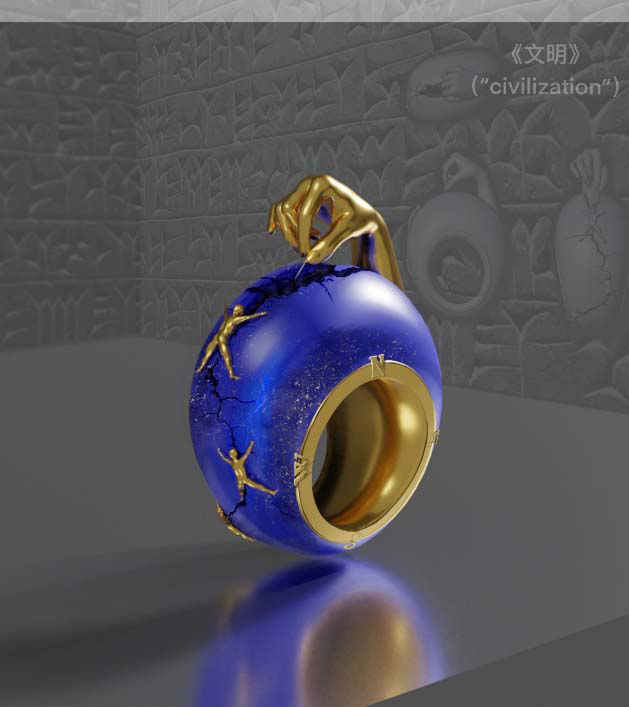 7
Name of design: Islet
Designer: LAI Qian Yi
Inspiration：
This work takes our current environment as the theme and depicts a world that may appear in the future: As the boundary between our expanding human living environment and natural environment is gradually broken, the living environment of natural creatures inevitably shrinks and some species are on the verge of disappearing. 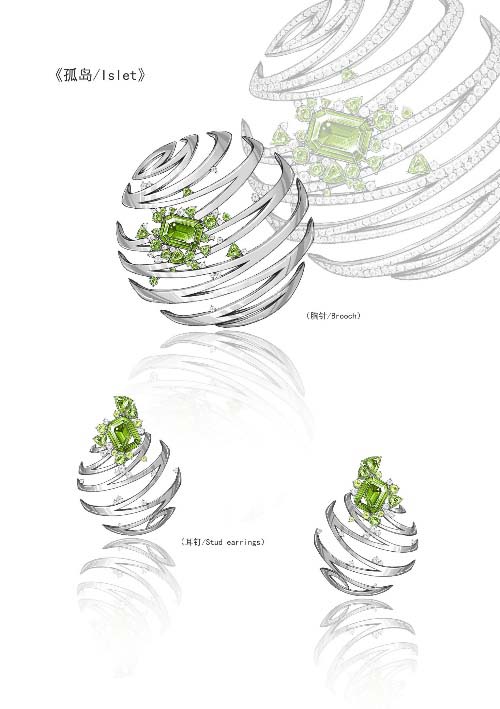 8
Name of design: Reincarnation
Designer: DING lin
Inspiration：
Look at the moon from the remnants of the Roman pillars and calculate astronomy in the shadow of the sun. History is passing, memory is reincarnation. 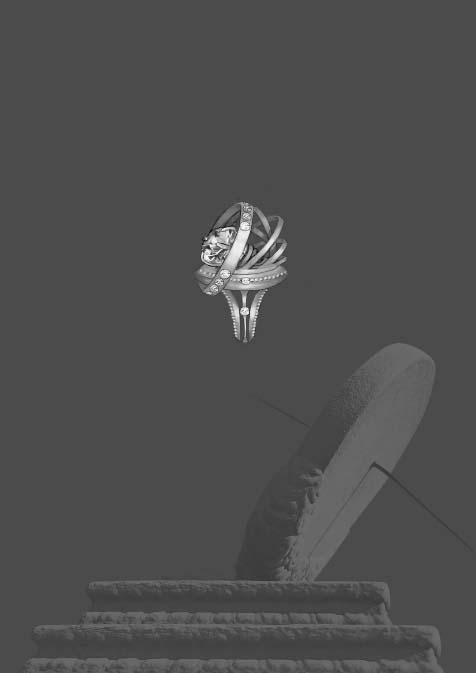 9
Name of design: Bullfight
Designer: JIANG Jie
Inspiration：
“No break, no stand, break and then stand.” The punctured matador’s cape, sharp horns and raised backs illustrate the desire to break old rules, the will to fight and the power to build. 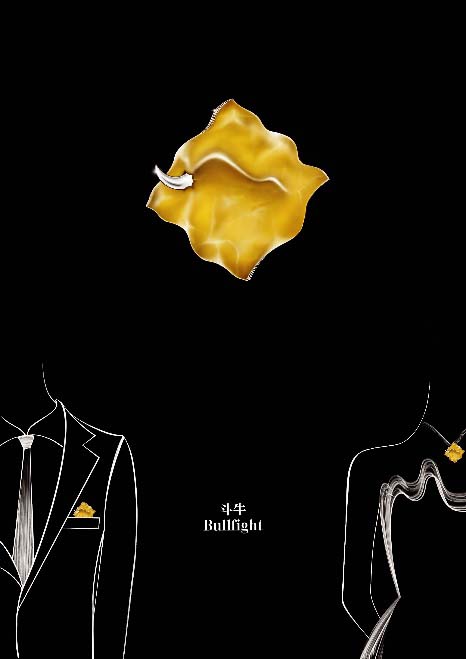 10
Name of design: Landscape
Designer: Yale, DUAN Yan Long
Inspiration：
“Tao De Jing” records that “the mine is like a valley:” Valley means an open space between mountains, and rivers flow between the mountains here. 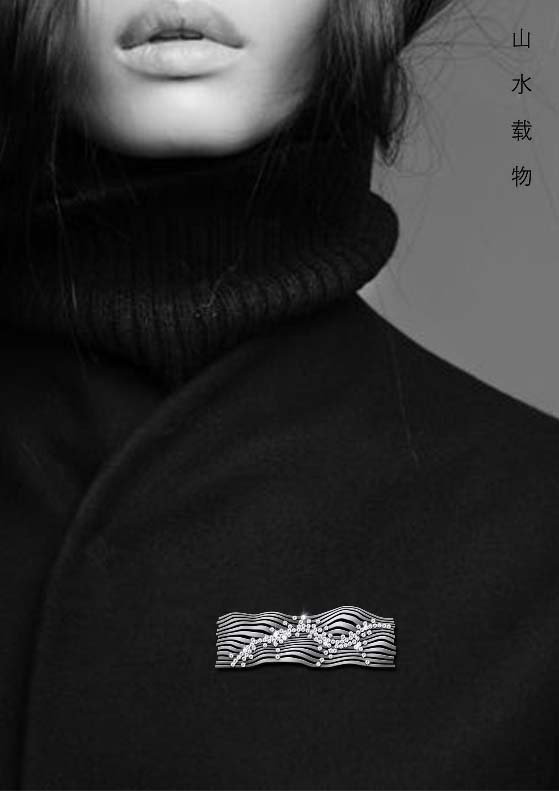 11
Name of design: “Zhu” Fu
Designer: HUANG Wei
Inspiration：
The work is a brooch with chopsticks as the design element. Chopsticks are also called “zhu” in Chinese, so the work is named “Zhu” Fu which means blessing. Traditional Chinese chopsticks are combined with simple western patterns to show the integration of Chinese and Western aesthetics. 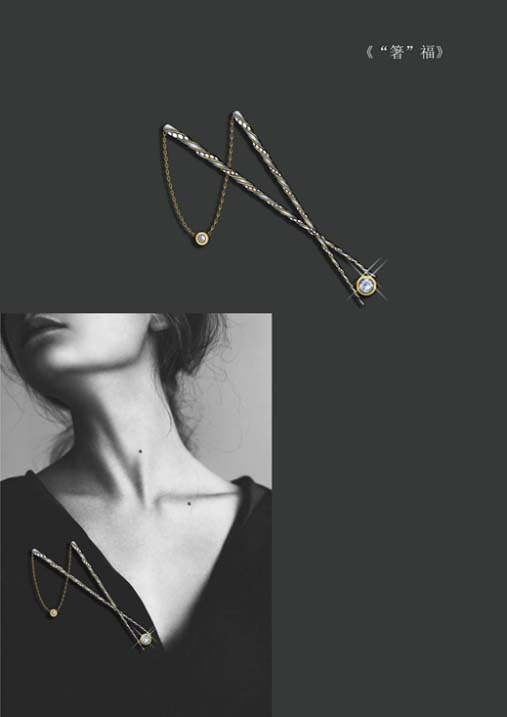 12
Name of design: Day & Night
Designer: TANG Duo
Inspiration：
The design is inspired by the day and night, as well as the stars and sea. Black and white intersect. Day and night merge, the stars mingle with the sea. 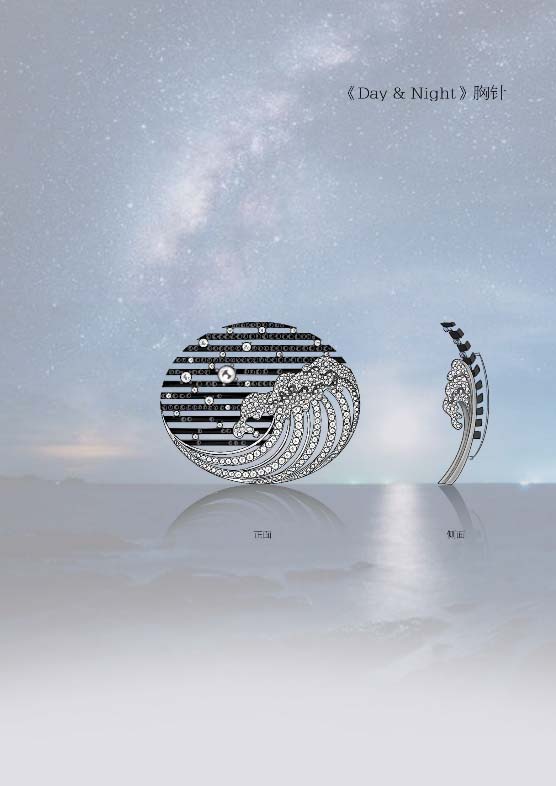 13
Name of design: The fusion
Designer: OUYANG Pei Ling
Inspiration：
The design was inspired by the network technology circuit board. Ancient China developed the Silk Road to promote commerce and trade. Faced with the huge impact of COVID-19 this year, foreign trade on the Internet has emerged with unique advantages. 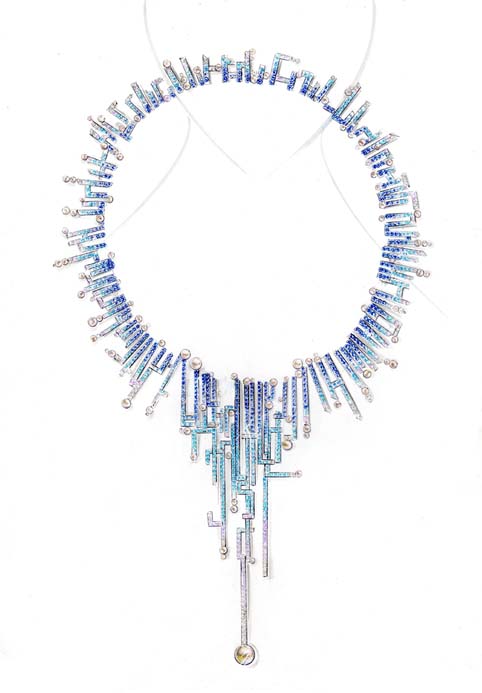 14
Name of design: Crane
Designer: DENG Yue
Inspiration：
This is a brooch. It is not only a feather, but also a wild crane flying downward, a peony arched in the feathers. It represents a more peaceful and integrated mentality with which to treat the rich and the poor, changes and differences. 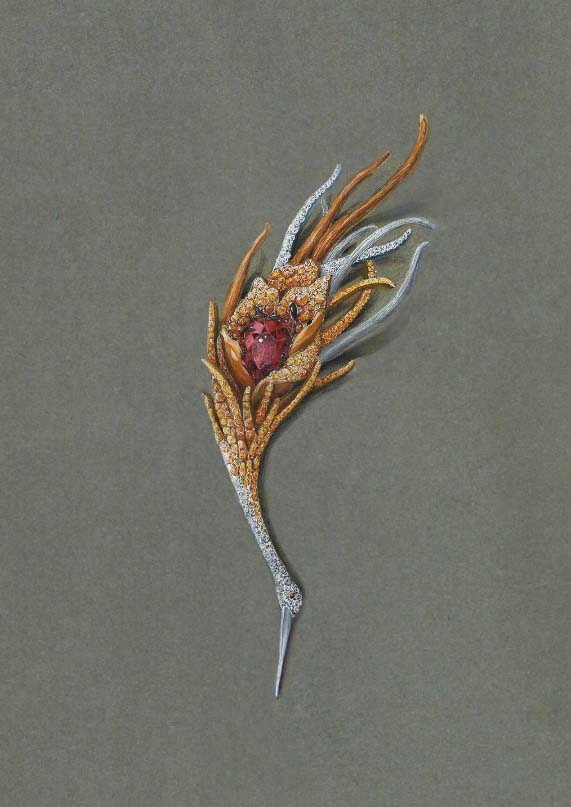 15
Name of design: Dreaming in the garden
Designer: CHEN Theresia
Inspiration：
The work is inspired by the “Intangible Cultural Heritage National Treasure” Kun Opera “Peony Pavilion”. It reproduces this beautiful love story with the theme of “A Dream in the Garden” in the play. 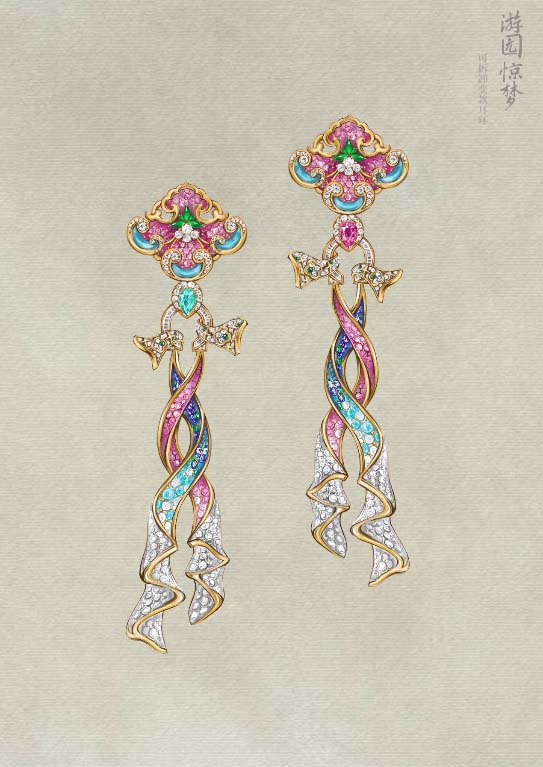 16
Name of design: /
Designer: WANG Xuan
Inspiration：
I have exaggerated the structure and shape of the braces. Combined with the diamond form, this attempts to represent the hidden aesthetic truth of society under the light of a huge aura of “beauty”. The face shape of the man influenced by the huge frame of the mask sets off the dreamlike trap of the consumerist era.

17
Name of design: The Light of Spirit
Designer: BAO Cai Cai
Inspiration：
Western Art Deco style combines with Eastern Zen and hard metal texture blends with light gauze. It is intended to express: Although people cannot extend their lives, they can determine the width of their lives. No matter what the situation, the inner spiritual light still shines and continues. 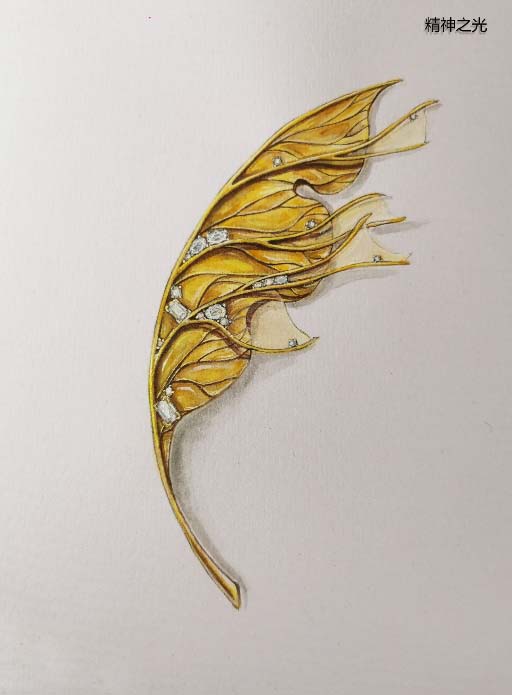 18
Name of design: Inclusions
Designer: LI Ruo Xi
Inspiration：
This work borrows the value symbol “diamond” to express the existence of inclusions. It should not be a bias to judge values. People’s pursuit of a “flawless diamond” meets the aesthetic needs of the general sense. 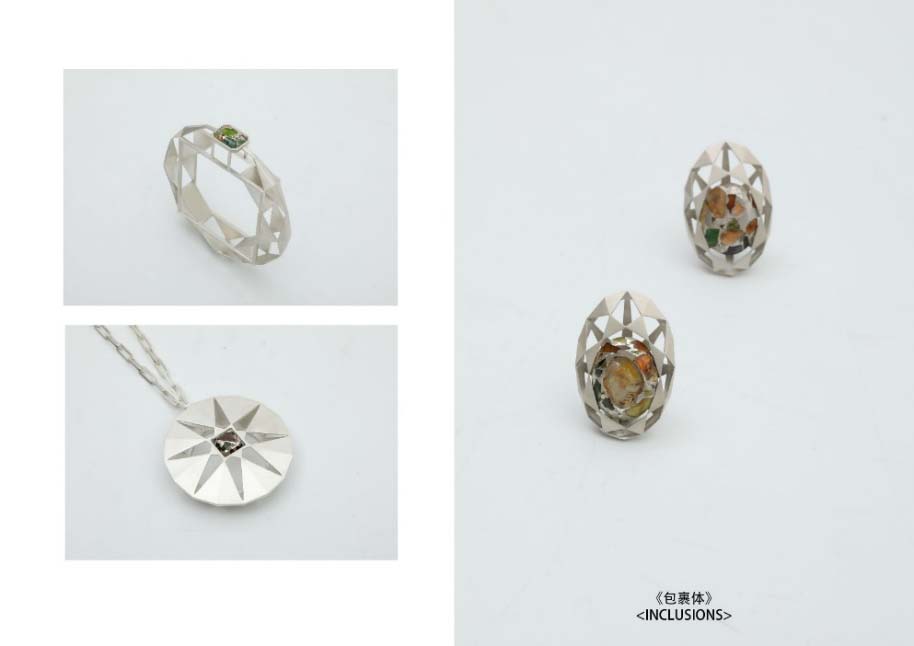 19
Name of design: Two instruments
Designer: CAO Yu Ting
Inspiration：
Inspiration comes from the theory of Yin and Yang balance in Yi Zhuan. The art of interpreting ancient Chinese culture with figurative white birds and snakehead fish and modern lines. White birds for Yang, black fish for Yin. All things and phenomena in the vast universe contain Yin and Yang, as well as both sides of the surface – and inside. 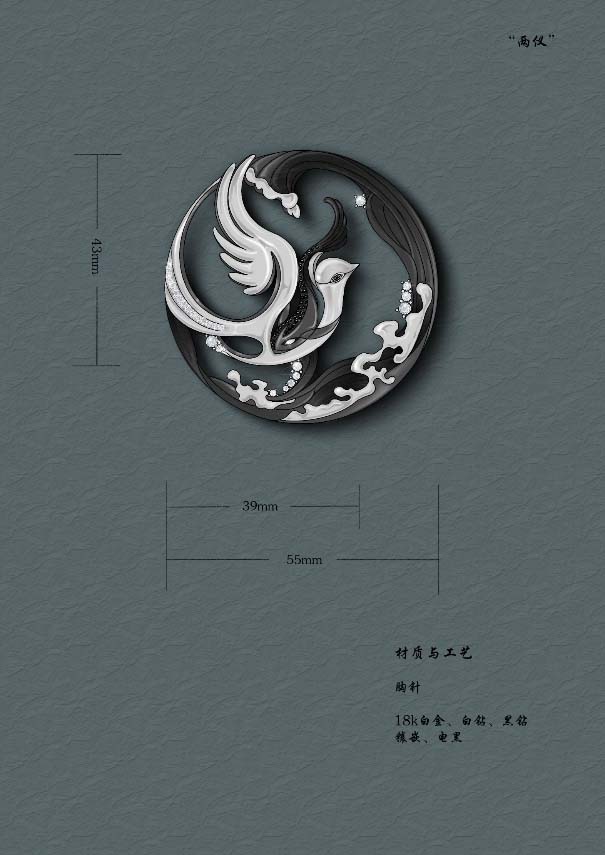 20
Name of design: The secret of Life
Designer: GONG Shu Jing
Inspiration：
The core, mantle, crust, ocean. Plates collide again and again. Different substances fuse under high temperature and high pressure for hundreds of millions of years, forming a rare gem. Man is also a rare creation of God, with his own DNA code. The light of human nature is like gems and gold. 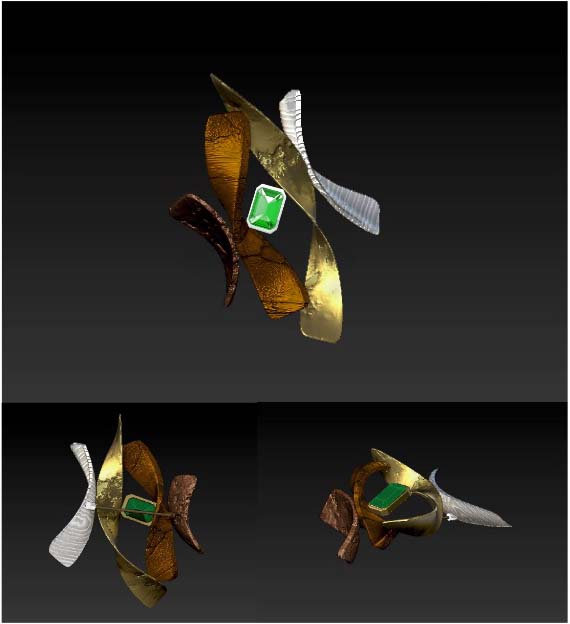 21
Name of design: THE COMET LIFE
Designer: Cristian BALLESTEROS NAVARRO
Inspiration：
THE COMET LIFE: The first thing one associates with the impact of a comet on a planet is destruction…but what really happens is that the collision removes all the molecules, reorganizes them and, together with the fusion of their particles, gives birth to one of the most wonderful things – LIFE. 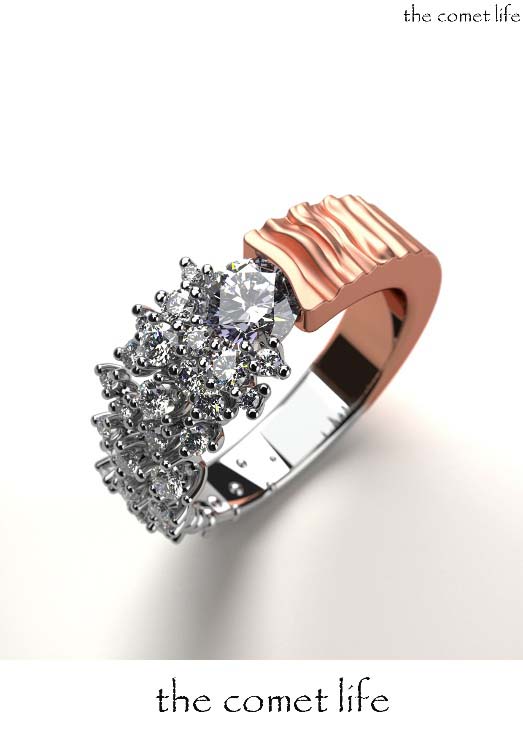 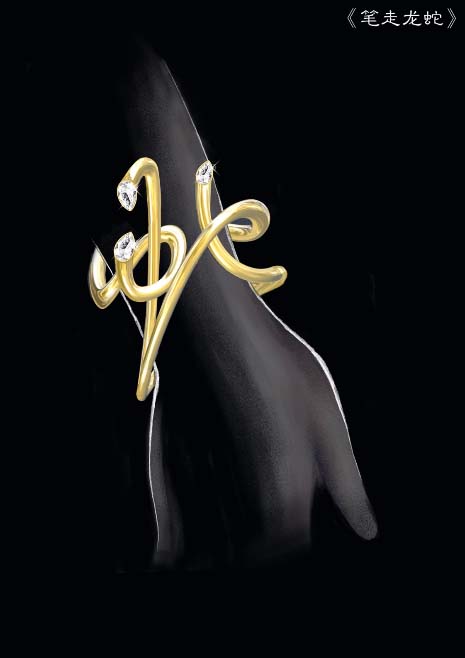 23
Name of design: Tea
Designer: DONG Shu Tong
Inspiration：
The work is inspired by the “yin and yang” in ancient Chinese philosophy. When yin and yang collide, they absorb, harmonize and merge with each other. The work combines the three yin and yang circles in space and makes them staggered and twisted. Tea consumption originated in China and became popular in Europe. This work uses two completely different forms of tea due to the different tea drinking habits of the East and the West as design elements. The final shape of the radial rotating drill point shows the collision and integration of Eastern and Western lifestyles in the tea culture. 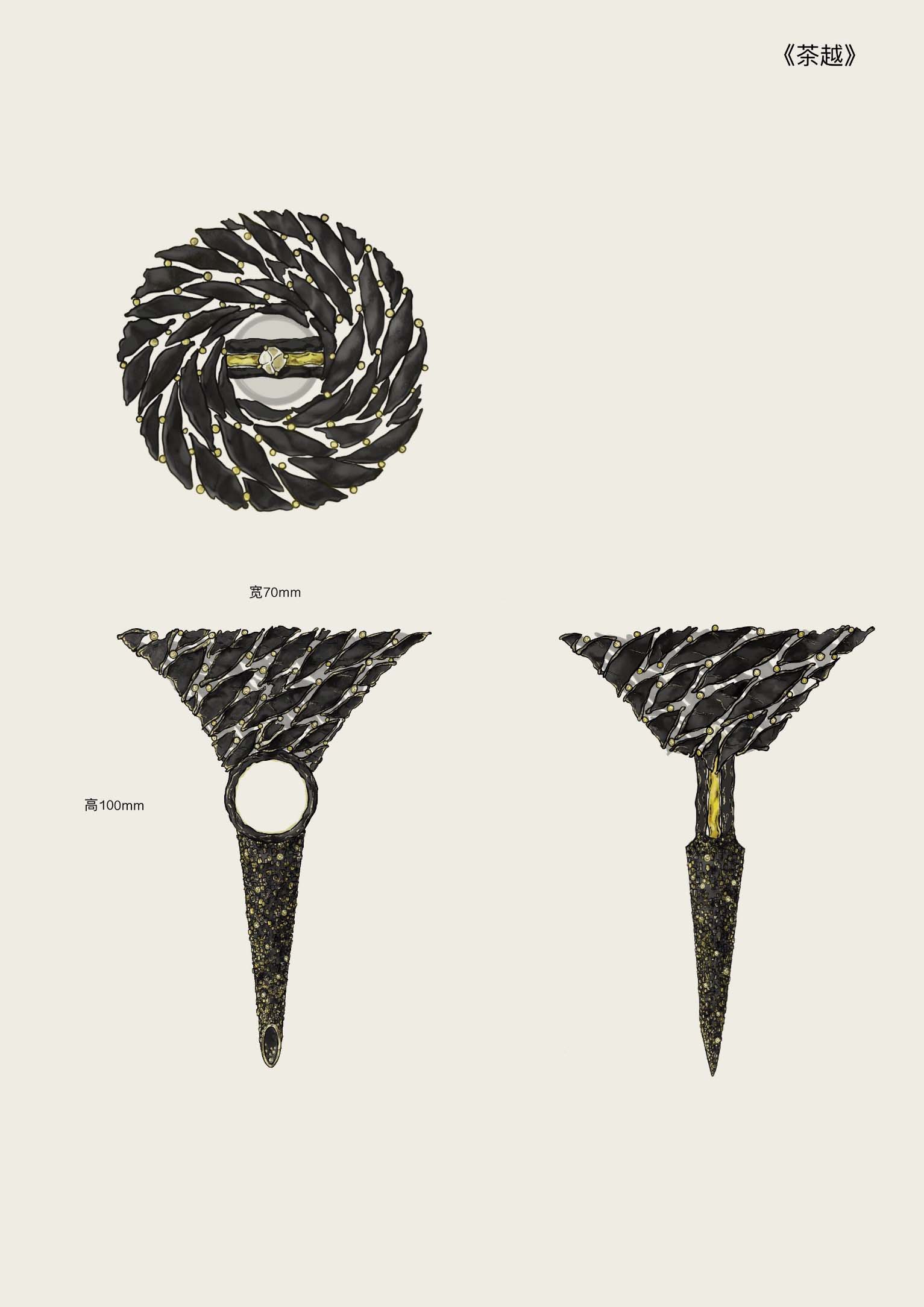 24
Name of design: Water texture
Designer: ZHANG Jialin
Inspiration：
The colored part in the design symbolizes the various colors of plastic glass. A plastic hollow texture is used to show the texture of rain hitting the water. The white pearls on the edge of the texture symbolize the white bubbles floating on the water surface with white pollution. 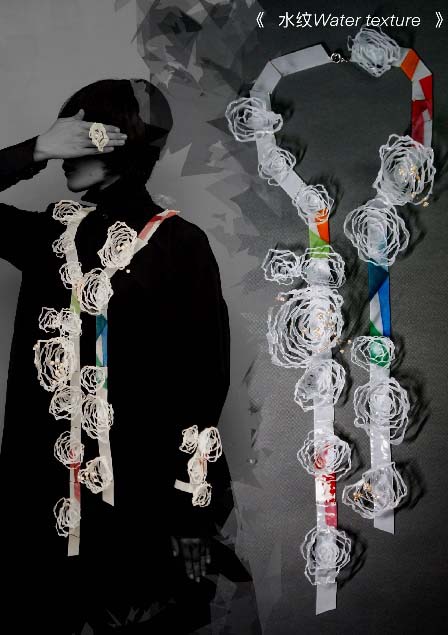 25
Name of design: Art of Chinese Bucket ARCH
Designer: YANG Lin
Inspiration：
We tend to play with materials, combining wood and metal as well as pearl and metal; and that adds brand imagination to cultural inclusions. 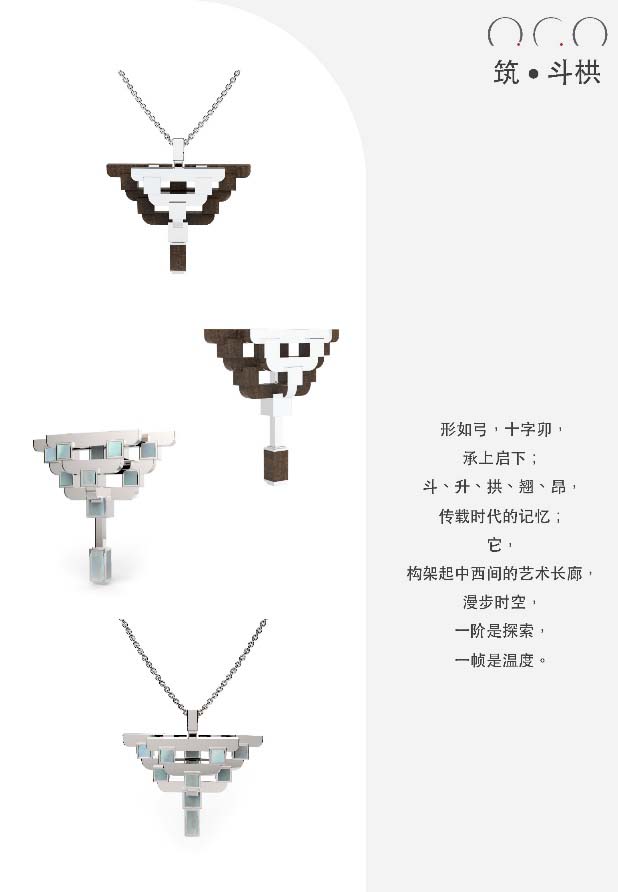 26
Name of design: A Tribute to Picasso’s Cubism
Designer: QIU Shu min
Inspiration：
It was inspired by Picasso’s cubist paintings. He combines the collision and fusion of plane painting and geometric solid structure. They are just like the geometric fish on paper with all kinds of vitality and artistic aura. 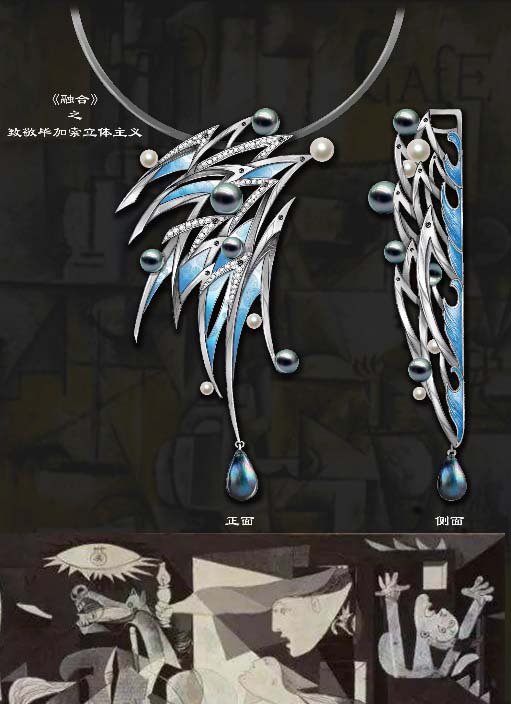 27
Name of design: Coincide
Designer: CHAN Szewing
Inspiration：
Each piece of wood has its own pattern, consisting of four small pieces of different wood. The combination will naturally lead to a new relationship. Edges and corners give people a hard feeling. Therefore, the way of wearing it adopts soft materials like wool to combine. Such collision creates the beauty of coincidence. 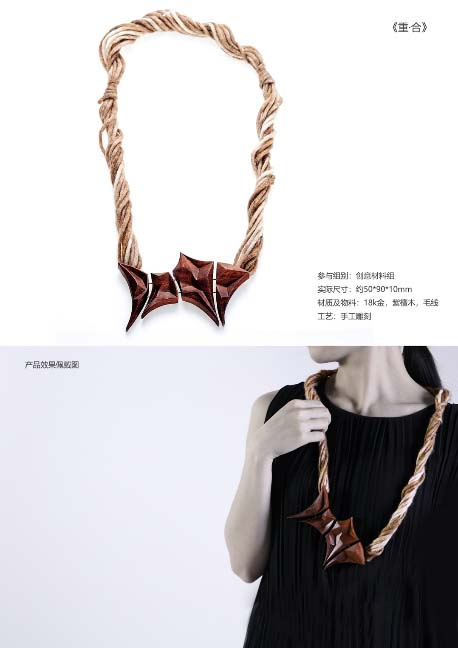 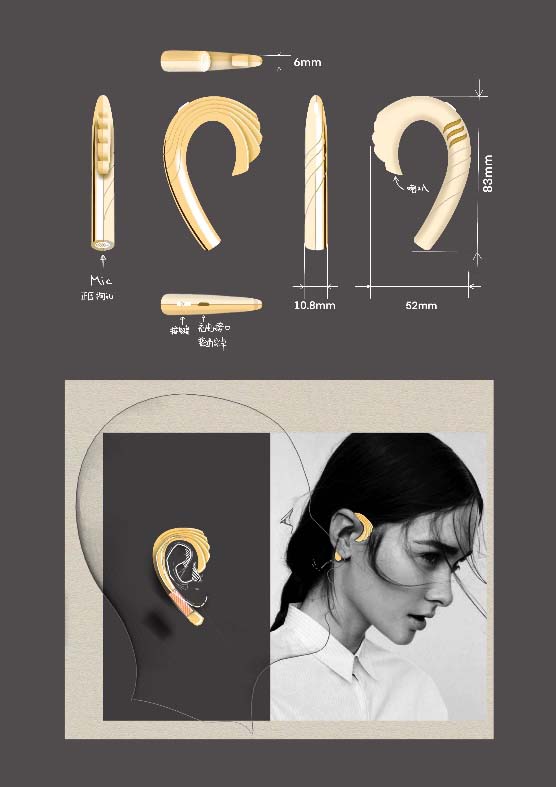 29
Name of design: Blooming fireworks
Designer: LU Ye
Inspiration：
When fireworks bloom in the silent night sky the beautiful figures are like a group of ballet dancers dancing in the middle. Let people forget the huge noise when it broke out, and the silence of the night sky. The magnificence before shattering is to leave a beautiful shadow until the ashes disappear. 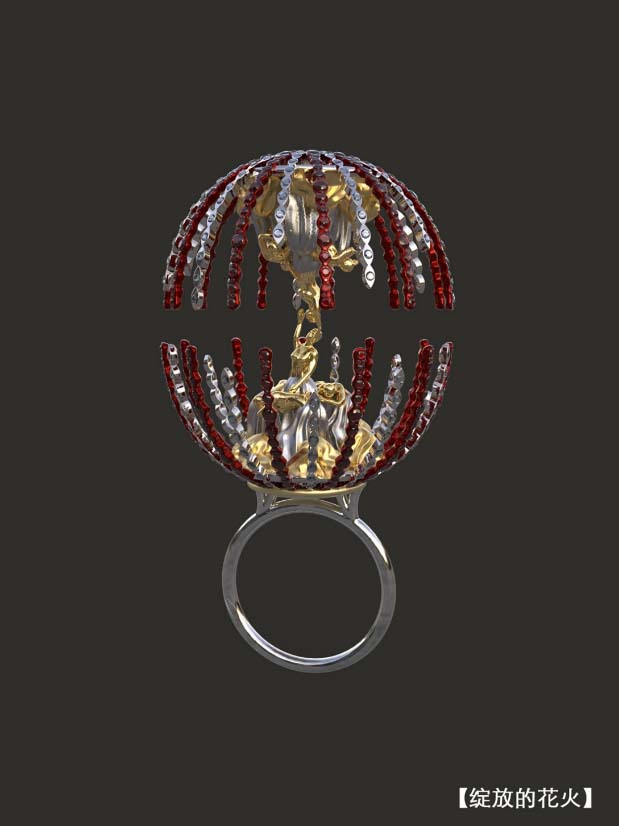 30
Name of design: HARMONY
Designer: XIONG Yu Xin
Inspiration：
I borrowed the classic Chinese snuff bottle image. Combining a modern gem with a resin to simulate the state of the gem when it melts, it is also a “snuff bottle” smoking state. 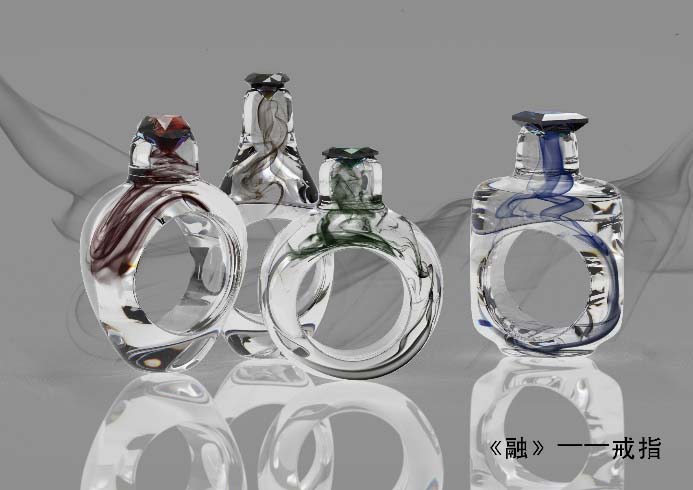 IGI congratulates and thanks all contest participants for their talented submissions

Next steps for shortlisted works –

DeBeers Encouraged by first sales of 2021