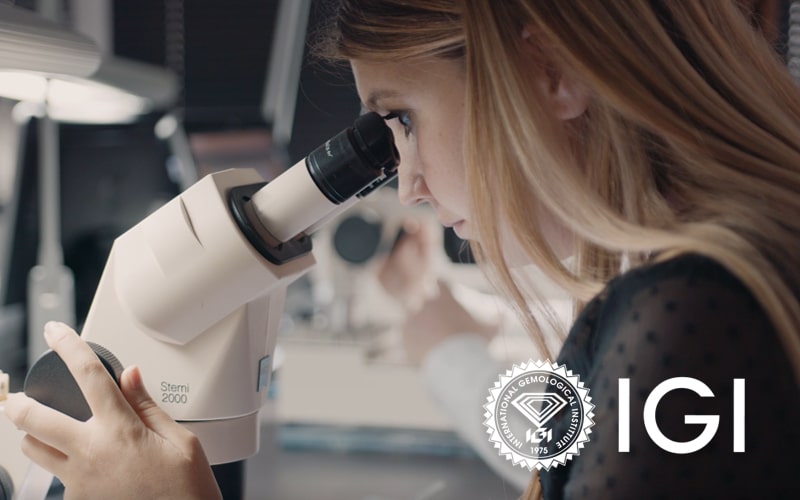 There are two sophisticated ways of producing lab grown diamonds. The first is the High-Pressure High Temperature (HPHT) method, where heavy mechanical presses and intense heat are combined to replicate the conditions under which natural diamonds formed. The second is Chemical Vapor Deposition (CVD), a process that superheats gas into plasma, releasing carbon atoms to ‘build’ a diamond crystal at the atomic level.

Both of these methods grow diamonds which are optically, chemically and physically identical to natural diamonds. However, one process assembles the diamond in vertical layers and the other uses a metal catalyst to dissolve component carbon. These different approaches produce inclusions which differ from those seen in natural diamonds. These inclusion types are important to recognize when grading lab grown diamond clarity, one of the value-setting 4Cs of diamonds.

In the HPHT process a metallic catalyst is used to dissolve the carbon which migrates to the diamond seed, stimulating the growth process. Logically, pieces of that metal catalyst which do not melt entirely can become trapped within the diamond crystal.

Commonly seen in HPHT lab grown diamonds, metallic needles can be large or very fine. They frequently follow the growth pattern of the lab grown crystal, aligning themselves along crystal faces and edges.

Relatively uncommon, branchlike dendritic inclusions can resemble trees or bushes when dark, or snow-covered branches when light. They occur when flux, still in its molten state, becomes trapped by the growing crystal.

As you saw in the video at the beginning of this article, Chemical Vapor Deposition (CVD) causes carbon atoms to rain down on a substrate of diamond seed, growing diamond in vertical layers.

These carbon inclusions, seen in CVD lab grown diamonds, take on a comet-like appearance. They are formed when crystal growth continues after the appearance of dark/opaque inclusions; i.e. non-diamond carbon which subsequently disturbs the continued growth process.

Planar Clouds are groups of minute to very small growth remnants which occur on a single geometric plane. Planar clouds form due to stops and starts in the vertical CVD crystal growth process.

Also referred to as Stria, Internal Graining shows as reflective angles or lines, that may appear whitish, colored or reflective, caused by stops and starts in the vertical CVD crystal growth process.

Inclusions seen in both natural and lab grown diamonds

Blemishes seen in both natural and lab grown diamonds

These are essentially the same as Naturals and Indented Naturals, seen in natural diamonds.

Fun fact: Some HPHT grown diamonds have enough metallic remnants to be picked up with a magnet.

HPHT grown diamonds may also be falsely identified as moissanite by handheld electronic diamond testers, which measure electrical conductivity. Learn more about this, and other false positives, in our post covering Diamond Detection and Handheld Testers.

This record-breaking perfume bottle is covered in 3,500 diamonds