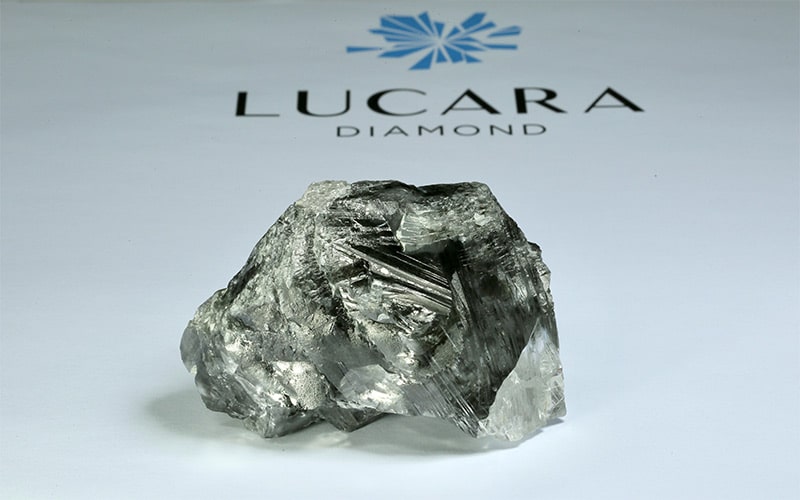 With this discovery, the Karowe mine has the distinction of becoming the world’s first to produce three rough diamonds weighing over 1,000 carats. With dimensions of 77.00 x 55.00 x 33.00 millimeters, the diamond’s makeup has variable quality. Described as a clivage gem with significant domains of high-quality white gem material, Lucara CEO Eira Thomas believes it will yield high value collections.

Lucara is delighted to be reporting another historic diamond recovery and its 3rd diamond over 1,000 carats, a world record for Karowe. Although complex, these diamond recoveries do contain large domains of top color white gem that will be transformed through our partnership with HB Antwerp into valuable collections of top color polished diamonds, very much in high demand in the market today.

Diamond recovery in that unit of the mine takes place after the primary crusher, ahead of the autogenous mill, which is the first opportunity for recovery. Several other large diamonds with the same fundamental appearance were recovered on the same production day, weighing in at 471 carats, 218 carats and 159 carats, respectively. This indicates that the 1,174 carat diamond was likely part of a larger diamond with a total weight of 2,000+ carats.

1,174 Carats: The subject of this story is now the third largest rough diamond overall. At 77.00 x 55.00 x 33.00 millimeters, it has been described as a clivage gem of variable quality with significant domains of high-quality white gem material.

1,758 Carats: The second largest rough diamond in history weighed 1,758 carats. Discovered in April, 2019, this dark crystal was named Sewelô (“Rare Find”). Measuring 83.00 x 62.00 x 46.00 mm, which is approximately the size of a tennis ball, it was purchased by the French luxury brand Louis Vuitton, despite doubts about its suitability for jewelry applications.

In 2021 alone, Karowe has produced 17 diamonds weighing more than 100 carats, including 5 diamonds greater than 300 carats.

A foto-feast of four delicious diamonds