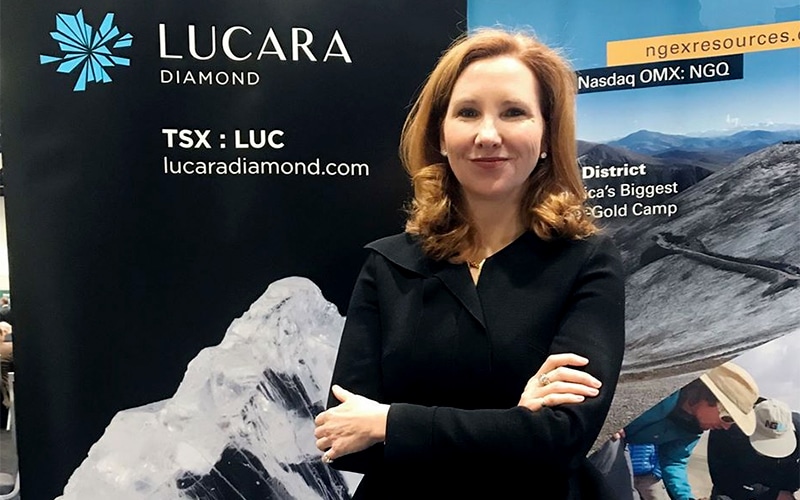 My review is in. Courtesy of The New Yorker earlier this year, The Woman Shaking Up The Diamond Industry is a thoroughly composed, thoughtful and uplifting story of history, intrigue, discovery and achievement – definitely worth an hour of your time.

Composed by Ed Caesar, a contributing writer who was named Journalist of the Year by the Foreign Press Association of London in 2014, it can be found in hard-copy in the magazine’s February 3, 2020, issue under the headline “The Rock.”

In his descriptive coverage of the upstream world of mining, Caesar vividly describes secure gemstone sorting areas like the “Red Zone,” where gems are handled behind glass and transported in pneumatic tubes. His narratives are reminiscent of something from a spy novel. Or Willy Wonka, perhaps.

There are two sorting rooms, in which workers organize the mine’s produce by size and shape, using gloves affixed to sealed and glass-fronted cabinets. Similar-sized stones are plucked from a conveyor belt and placed in a jar. At the end of the day, the jar is sucked upward to a vault through a transparent pneumatic tube—a process that evokes the Augustus Gloop scene from “Charlie and the Chocolate Factory… On leaving the Red Zone, everyone, including chief executives, is strip-searched.

A journey through time

The piece provides a historical synopsis useful for journeymen and experienced enthusiasts alike. From Maximilian I, HRE, innovating the diamond engagement tradition to Frances Gerety penning it into “forever” status. From the Moguls of India, Pliny the Elder and the British Royal family to Graff and Vuitton today, Caesar creates context for his story with abundant, informative and enjoyable information.

A Queen of Diamonds

The foundation of the article revolves around Canadian geologist Eira Thomas, co-founder of Lucara Diamond Corporation and a vibrant, dynamic personality.

Eira Thomas, who is now Lucara’s C.E.O., has been prospecting since she was a child. Now fifty-one years old, with reddish hair, catlike features, and blue eyes, she has the sort of calm demeanor that one associates with oceangoing naval captains. When we met at a hotel in the Mayfair district of London, in August, she wore ornate diamond rings and earrings made from stones discovered at her mines, but I sensed that she would have been just as happy decked head to toe in waterproof gear, hiking through the tundra.

The stories of her ascension in the male-dominated diamond industry is both inspiring and colorful, beginning with her successful discovery of economic diamond deposits in the vast wilderness of Canada and its impact upon the DeBeers’ monopoly.

The pipes that Eira Thomas discovered became one of the world’s richest diamond mines. By 2016, the deposit, now known as Diavik, had produced more than a hundred million carats. After the Thomases’ breakthrough, other firms developed their own assets in Canada. Within a decade, Canada was producing sixteen per cent of the world’s supply of gem-quality stones by volume, and Eira was known as the Queen of Diamonds. (Gren, who still works in the business, and retains his Welsh accent, says that he now asks Eira for advice, rather than the other way around.) The Canadian discoveries were part of a series of events in the nineties that loosened De Beers’s stranglehold on the industry.

The balance of Caesar’s composition (which is wonderfully generous in length) follows Thomas’ path to the Karowe diamond mine in Botswana, where she and Lucara become some of the world’s most influential and disruptive diamond industry powers. The chapters involving the discovery, negotiations and sale of both the Lesedi La Rona and Sewelô are told in extraordinary detail, with engaging, well-known personalities and some well-played theater.

As we covered in a prior post on Livia Firth and the Diamonds of Botswana, Caesar also touches on the immensity of revenue which comes into formerly poor parts of Africa due to diamonds.

Hundreds of thousands of Botswanans have been brought out of poverty by the government’s diamond windfall. At independence, in 1966, more than half the population lived below the poverty line; that figure is now sixteen per cent. The government uses diamond royalties to fund infrastructure, health care, and education, including advanced degrees; the most promising students can even receive aid to pursue study overseas.

The article also provides delicious background history on all three of those record-setting diamonds we covered in one of our most popular GemBlog posts from early 2020.

Largest diamond ever. Who has it? Who wins?

So carve out some time to cuddle up with a blanket, your tablet, your fireplace and a glass of wine. The Woman Shaking Up The Diamond Industry is an enduring, satisfying read. If you prefer audio, it’s also an hour-long listen – available for iPhone or Android via Audm.

Either way, it’s a beautiful piece that has something for everyone: Exploration. Adventure. Discovery. Intrigue. Royalty. Celebrities. Fashion. And rough diamonds weighing thousands of carats.

What are you waiting for?

It Rains Diamonds on Neptune and Uranus

And the 4.4 billion-year-old winner is –