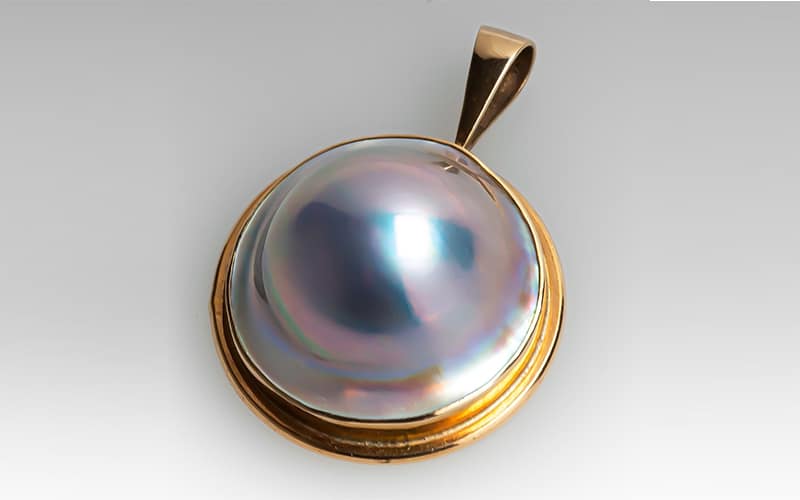 Just to begin, have you ever wondered about the etymology of the word “Mabé”?

It’s nothing too exotic or titillating. “Mabé” is simply the Japanese term indicating that specific artifact.

An artifact assembled in a cultured pearl that is a “composite material consisting in a layer of nacre characterized by a curved surface and available in various shapes, filled with different materials, with a base closing in mother-of-pearl or other materials.”

This is the description given by the Italian institute (UNI 10245) under the wording “Gemmological materials – Nomenclature”, at “Definitions”, Art. 4.6.3. And here I am pointing out a description complying with the UNI standard that, in my country, counts as a regulatory disposition.

Why? Because not everyone understands the importance of a transparent, accurate report of the gemological materials included in the jewelry one offers to consumers. And yet, such reporting not only advances the competitive position of one’s store, it also serves to protect against legal disputes or spurious claims and demonstrates corporate social responsibility – a topic under the microscope these days.

After allaying any doubt concerning interpretations some technical questions still remain. What is a cultured or cultivated pearl? Permit me to make reference, again, to the above-mentioned standard:

What are these pearl mollusks, in the case of our “Mabé”? Variously, oysters of the Pinctada Maxima genre/species – silver or golden labiates having fun in the waters of the South Seas – or the Pteria penguin genre/species – ranging from a copper to a brown color, flourishing off the coasts of Thailand.

We should also add the gastropods of the Haliotis genre, better known as Abalone or Paua, able to supply – in New Zealand – nacre characterized by amazing iridescence, the effect of which can be compared to play of color in opal.

What is the exact meaning of composite or assembled? Again I cling, like ivy, to the above mentioned definitions:

Material consisting in few distinct components, of similar or different pre-set shapes, with a natural and/or artificial origin, joined together to form a single gem.

In said case, the components involve:

Summarily, the layer of nacre that will be formed by covering the hemispherical dome will take the shape of the above-referenced substance.

For all intents and purposes, you could consider this concretion as a Blister Pearl. The basis of the dome, round in its classic geometry, may have different shapes, also reaching remarkable sizes from 10 to 20 mm and more.

By the way, the process can be repeated using the same mollusk again:

Is the semantic content of the expression “composite (or assembled) cultured pearl now clear? Well, our “Mabé” is exactly this: An item with which very respectable jewels are created – such pieces that no one sells you for nothing.

So, in case you feel the sudden inspiration to show-off your knowledge, you can merely alternate the term “Mabé” with Blister.

And if someone should ask you the meaning of this latter, you can declaim in a confident voice: “A pearly bubble, mostly hemispherical, grown against the internal wall of the shell of a pearl mollusk that, once obtained by applying in such position a hemispherical nucleus made of mother of pearl, resin, etc., will generate a cultured Blister!”

However, the proper and correct description of the material is still of a critical importance (and here I am serious about that).

Science and Art: From brightest to blackest carbon