Thousands of years ago in the southwest African desert a scouting party of Nama People discovered a field of oddly shaped, dimpled iron fragments. Fascinated, they began gathering them up, extracting the ore for use in tools, arrowheads and tips for assegai; a traditional slender, hardwood spear.

Imagine how shocked these ancient people would have been if you informed them those metallic fragments had, quite literally, come to them from the very stars they worshiped.

The Nama People had, in fact, discovered pieces of the Gibeon meteorite, which flamed through our sky 30,000 years ago. It entered Earth’s ionosphere traveling at nearly 100,000 kilometers per hour, or 17 miles per second. It’s massive iron body superheated, turning into a brilliant fireball, and ultimately exploded high in the atmosphere. Shattered pieces of the meteorite rained down across a wide swath of what is present day Namibia.

The distinctive pits seen in the meteorite’s fragments are called regmaglypts. They resulted from the incredible heat caused by ablation and vortices of hot gas.

Experts believe the meteorite was an extinct planet and the abundant iron which made earthfall started as part of that planet’s core. The core was exposed in a titanic collision with another interstellar body, which broke Gibeon apart and sent it tumbling on its fateful four-billion year journey toward Earth.

For those early south African tribes it sounds like something out of a Marvel Fantasy, doesn’t it? Fierce warriors brandishing arrows and spears tipped with extraterrestrial metal from the ablated core of an extinct planet!

The extraterrestrial nature of this rare material was not decisively confirmed until 1836 and it wasn’t until 1911 that collection efforts began in earnest. The strewnfield across which the cosmic iron fell to earth is a vast elliptical area 171 miles long and 62 miles wide. The village of Gibeon exists near the center of the field, and this is where the meteorite got its name.

A total of 51 masses were recovered by 1913 with a collective weight of nearly 17 tons, the largest weighing 1,116 pounds on its own. 33 of the fragments were brought to Windhoek, the capital of the Republic of Namibia. A collection of 28 meteorites, displayed at the fountain on Post Street Mall in Windhoek’s Central Business District, was proclaimed a National Monument in 1950. Many more fragments have been discovered over time, with the occasional fragment turning up even today. 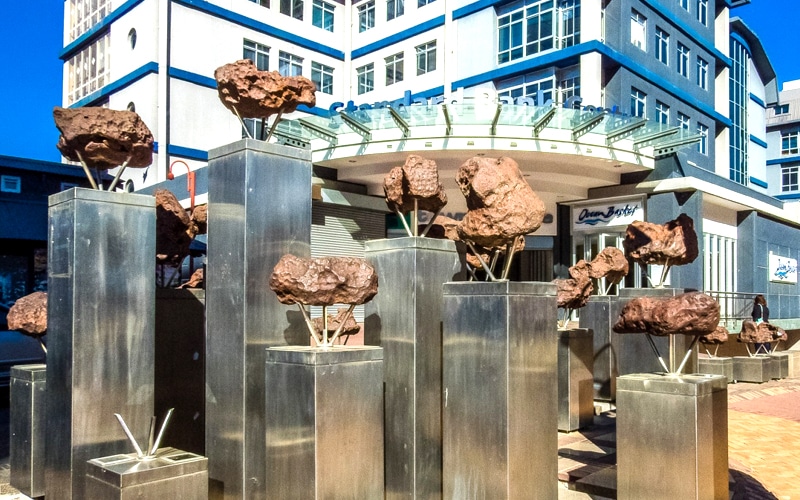 Meteorite prospectors began coming to the Gibeon area in the 1800s. For over a century their expeditions were mostly harmless, with finds of significance responsibly reported. This changed starting in the 1970s and 1980s with advances in location technology. Over the next decades enough material was removed that Namibia passed a National Heritage act in 2004, banning the export of meteorites. Today it is considered an offense to uncover or move a Gibeon meteorite from its find location without involving Namibian experts.

Don’t fret. You can still touch or even own a piece of Gibeon. Abundant specimens were exported from South Africa long before Namibia became independent and the prohibition was set in place.

A beautiful and natural aspect of the Gibeon meteorite is the distinctive etching present in its metallic material. Extreme slow-cooling during the core’s unimagineable 4-billion year journey through space created this unique crystalline pattern, perhaps the most appealing example of fine octahedrite on the planet. The Widmanstätten pattern, in tandem with a high resistance to oxidation makes Gibeon material especially desirable to jewelry designers.

Some extremely interesting applications of Gibeon’s material have taken place, from meteorite spheres to meteorite skulls.

In a throwback to human usage origins, there are designers producing meteorite knives. Invoking my favorite super-hero stories again, I’m not sure an extinct-planet knife would scratch Superman – and I don’t intend to find out. But the Kryptonian concept is fun to ponder.

And now, here we go gentlemen. Are you ready? Your attention please for a smug opportunity.

Not cool enough yet?  Well how about this. If your significant-other wears a diamond, which is forever, then wearing a piece of Gibeon meteorite is decidedly forever-er. The world’s diamonds are 1-3 billion years old. A piece of Gibeon is their senior by a cool billion years.

Good news Ladies. If you think the meteorite stuff is cool I have one for you too!

The world’s supply of black diamonds (carbonado) are thought to have come from a supernova explosion. They started as diamonds the size of asteroids, around a kilometer or more in diameter, and broke up while making Earthfall in the two countries where they are found today.

One of those countries, most romantically, is Namibia. There, they have kept the Gibeon meteorite company through the ages. Now isn’t that sweet?

Read all about them in The ‘Secret’ of Black Diamonds here.