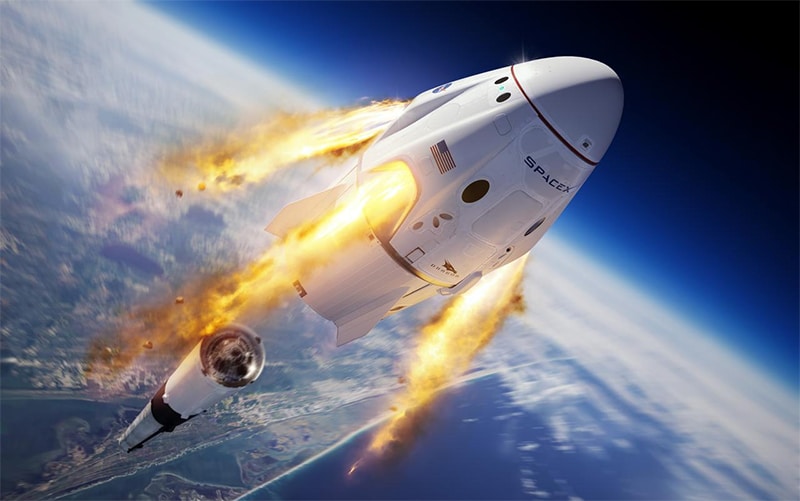 As the world watches the engaging achievements of NASA and SpaceX – and Boeing sits in the wings hungry to make their own space-shots – let’s take a fanciful look at the landscape ahead for diamond enthusiasts.

If you haven’t already enjoyed our posts on Meteorites and Diamonds from space, as well as the Secret of black diamonds (spoiler alert…#space) let’s cut to the chase. It turns out there are diamonds out there. In space.

In some cases, entire planets composed of diamonds.

Do I have your attention?

There’s good news for aspiring explorers. According to the United Nations Outer Space Treaty, penned at the height of the 20th century space-race, the heavens have been declared free for exploration by “all States.”

In fact, a number of binding international safekeeping agreements also apply to space-faring, including the ban of nuclear weapons tests and even required protocol for the rescue of other astronauts and craft in distress, reminiscent of international maritime law.

And it gets even better.

What’s mined is mine!

If you’re a United States citizen you’re not only free to explore, lollygag and see the galactic sights. Thanks to the United States Space Act, signed into law by President Obama in 2015, what you find out there is yours to keep, transport and sell.

According to the Space Act:

Also known as H.R.2262 – U.S. Commercial Space Launch Competitiveness Act, this gives private companies the rights to whatever they can eventually extract from asteroids out there. This could include precious metals, water and (of course) diamonds. Depending on how things progress it sets up the possibility for a modern-age precious resources rush into the solar-system by empowered companies with commercial interests.

Businessweek indeed summarized one effect of that legislation as “American citizens could keep anything they brought back from space.”

Don’t head out there with Machiavellian intent, however. No one will be allowed to possess, own, transport, use or sell alien life. Such knavery is expressly forbidden in the act’s initial definitions under chapter 513, which define “space resource” as abiotic.

The term ‘space resource’ means an abiotic resource in situ in outer space.

To be clear, there will be NO kidnapping, selling or eating any aliens, no matter how cute.

We’re looking at you, Cyrano Jones.

With mining and possession rights understood, the U.S. Space Act does stipulate that it “does not thereby assert sovereignty or sovereign or exclusive rights or jurisdiction over, or the ownership of, any celestial body.”

What does that mean? Don’t go planting flags on other planets. You’re free to possess, own, transport, use and sell those asteroids and space-resource (sans porg & tribble) but somewhere, someday, someone’s putting a kibosh on the awesome celestial-ness of the bodies you’re collecting. So don’t give up that beach house on Maui just yet.

In fact I should probably mention that some authorities feel the United States’ recognition of its citizens’ ownership of “space resource” in such a broad manner is in conflict with the 1967 United Nations Outer Space Treaty. So consider that before booking your air, err…spacefare.

After some research, I discovered that the projected cost for a round-trip seat on SpaceX’s Crew Dragon, once offered, will be in the neighborhood of $55 million. Holy smokes. And a seat on Boeing’s Starliner will set you back $90 million by comparison. For the 75% markup I certainly hope they have hot towels, warm nuts and turn-down service.

I may need to rethink the cost versus benefit ratio here. But for those of us diamond lovers who grew up watching NASA’s moon-missions, four decades of Star Wars and all of the various flavors of Trek, it’s all great fun to consider as we watch these new adventures begin.