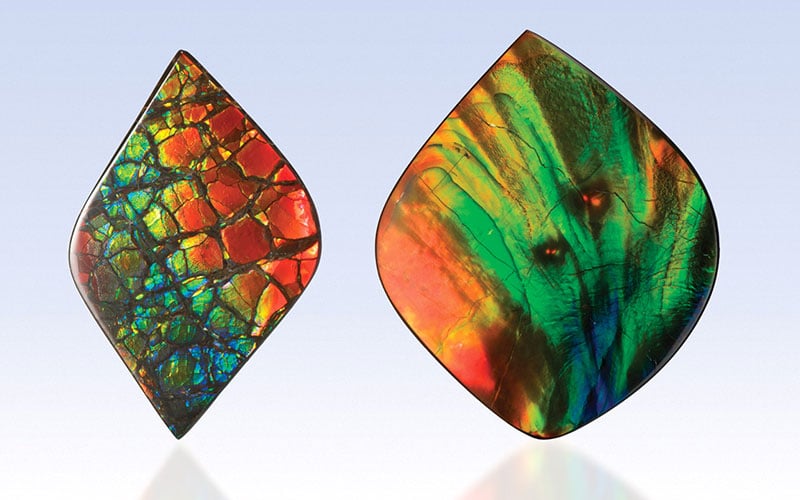 Today we turn our attention to the optical phenomenon of iridescence, that is the display of dispersive prismatic colors caused by the interference of light – generally due to thin films of gas or liquid – like Iridescent Quartz, Iridescent Agate and Ammolite.

A bewitching gift from Mother Nature – fossilized remains of that hard-shell sea mollusk Ammonite – looking somewhat like a squid, and living between 65 and 395 million years ago. Ammonite fossils are often made of Aragonite, but also of Pyrites, Calcite and other minerals.

Gem-quality iridescent Ammolite, found in 1962 in the province of Alberta, Canada, was launched on the market as “Corite”, “Gem Ammonite”, “Gem Aragonite” and “Calcentine.” Characterized by grey and/or brown color with red, orange, yellow, green, blue and reddish violet iridescences evident – when the angle of incidence of the lighting source varies, and due to the lamellar structure of the material – as a play of color similar to that shown by Opal. These outstanding gems bear witness to the beauty of Creation and will never fail to charm you. 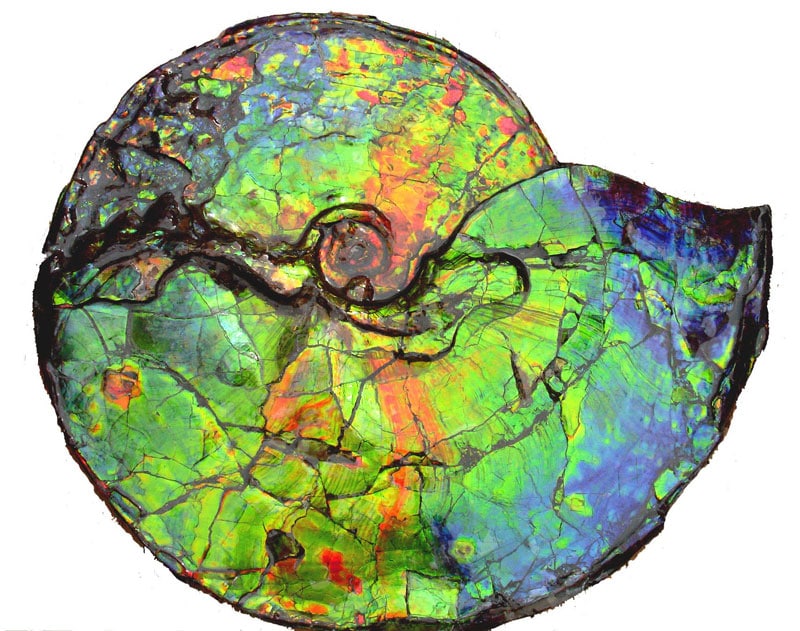 Two categories of the material can be distinguished based on physical appearance. Fractured Ammolite’s features are similar to that of stained glass, as the fossilized shell from which it originates underwent a natural process of fracture and healing. Slab Ammolite occurs when the original fossilized shell did not fracture and, therefore, the material presents as a solid color mass.

Opaque, with a Mohs hardness of 4, Ammolite may be polished in small slabs or as cabochons, these latter with the shape of a natural whole material or of doublets or triplets. Doublets consist in a matrix of schist – where Ammolite was found – on which the layer of Ammolite is attached. In triplets a thin film of Ammolite is attached to the schist matrix, covered, as a protection, by a dome of colorless and transparent Synthetic Spinel or Hyaline Quartz.

Untreated natural Ammolite is sold by the carat, based on quality and weight. Treated slab ammolite is, instead, sold by the piece. The same is valid for triplets – the value depends on quality and carats. In general, the quality factors which influence the price of Ammolite can be itemized as follows:

The higher the number of colors the higher the price. Three or more colors, roughly equally distributed, lead to the highest prices, with such samples often named as AA in the business transaction involving such a gem. Two or more bright colors make the sample considered A+. Red and green are more common than blue and purple (violet).

The liveliness of the colors is actually more important than their number. An Ammolite with a single color which is lively and bright will cost more than another displaying three or more colors which are light, dull, or dark.

This refers to the extension of the angle at which both colors and their brightness remain unaltered, while rotating or turning the stone. The best quality samples can be followed through a 360° rotation and the colors will remain the same, without turning darker. Those ammolites which evidence color visibility limited to 90° rotations or even less, belong to lower quality categories.

This quality factor takes into consideration the chromatic variation when the angle of incidence of the lighting source changes. The samples worth most attention are those displaying the whole spectrum of color, as you would see in a prism. The dichromatic samples evidence a change in two colors, such as red becoming green or green turning to blue. The Ammolites with color change limited to the hues making up its primary colors are considered as monochromatic.

The presence of wide spaces (healed fractures) between color areas play against the Ammolite. Obviously, in the case of material showing solid, unfractured color masses, a higher price will be a normal event.

Thickness of the Ammolite layer

When the thickness increases the value of the analyzed sample also increases.

Compactness of the material

A whole homogeneous natural body; doublet; triplet; the price determined by a sample consisting in a whole and homogeneous natural piece will be always higher (by about 25%) when compared to that of an assembled gem. On average, then, a doublet will cost around 20% more than a triplet, given that the highest number of elements making up the assembly will denote thinner layers and, then, a greater need for structural strengthening.

Only a slender percentage of Ammolites evidence such thicknesses (3-10 mm) that they do not require the adding of other layers for structural strengthening (doublets and triplets). For this reason, such Ammolites – consisting of a natural homogeneous whole body – are the most valuable. We also consider the presence of the typical colors on one side (“single coloring”) or on both sides of the whole body (“double coloring”).  Assembled Ammolites obviously display colors only on one side. In fact, the average price of an Ammolite (natural complete) with a “double coloring” is twice as valuable as a  “single coloring” sample, since the former account for only 1-2% of all whole natural Ammolites.

Predictably, the bigger the gem the higher the price – generally speaking – if other conditions are the same.

Of course, when choosing any piece, we should always ask ourselves: is it better to buy a small but beautiful sample or a larger, somewhat less beautiful one?