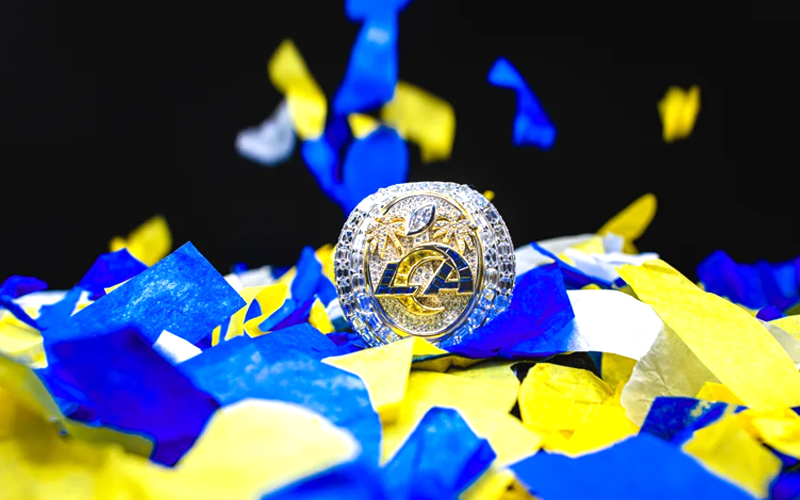 Earlier this year the Los Angeles Rams became the second NFL franchise in history to win a SuperBowl being hosted in their home stadium. Rams players, team leadership and Luxury Jeweler Jason of Beverly Hills collaborated to create a uniquely commemorative championship ring.

Each ring has approximately 20 ctw of colorless diamonds set in white and yellow gold. This represents the most carat weight in history for an NFL championship ring. Another 0.26 ct of diamonds adorn two palm trees featured on the face of the ring, representing the franchise’s 26 total postseason wins.

The Significance of January 12

Each ring features the champion’s name on a plate that mimics the SoFi Stadium Infinity Screen and their number adorned in diamonds. Coach Sean McVay’s ring uses the Rams’ logo in place of a number. The two stars pay homage to the franchise’s two Super Bowl Championships and to Los Angeles, which is known as the city of stars.

The 0.23 carats of diamonds on the stadium columns represent the 23 points scored in the Super Bowl to secure a Rams victory.

Two diamonds on each side of the ring, four stones total – adjacent to ‘World Champions’ and player’s name – represent the four teams the Rams beat in the 2021 Postseason to win Super Bowl LVI.

On the underside of the ring the victories over those teams are listed in reverse order, with final scores.

The ring opens to reveal the bowl of the stadium, and includes a piece of a Super Bowl LVI game ball and a portion of turf that the game was played on.

We hang our hat on being different. With this particular Rams ring, we broke the mold.