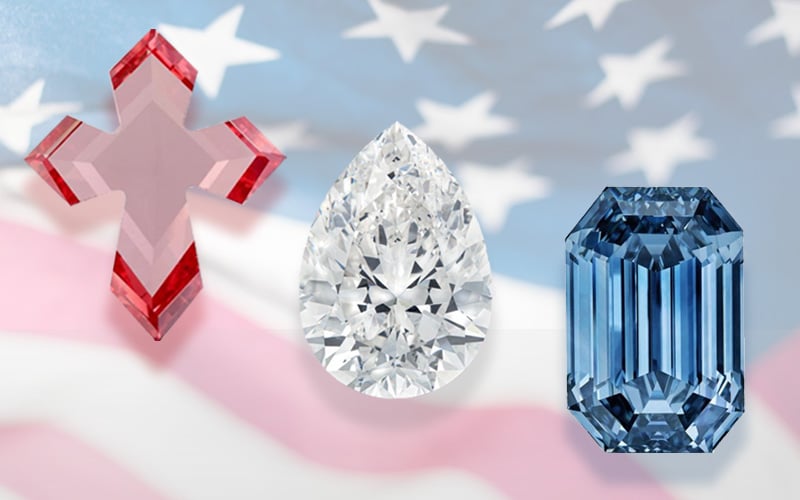 As people across America celebrate their Independence Day, we’d like to celebrate these distinctive diamonds in Fancy Red, White and Vivid Blue. Each one appeared separately in IGI GemBlog posts during the past year. Today we’ll revisit them together.

Happy birthday, USA. I hope everyone enjoys the visual fireworks below.

The unique design employs creative pavilion faceting which keeps the saturation strong across the table facet, which measures a standout 82% of the stone’s average diameter. With total depth of 15.5% the design maximizes vertical spread, reaching a length and width of 26.00 x 21.58 millimeters.

The 10.16 carat step cut cross can be seen halfway into this video, which also features 11 other fancy colored lab grown diamonds in fancy shapes.

The largest white diamond ever sold at auction, earlier this year, is known simply known as “The Rock.” It was gaveled near the low end of expectations but the 228.31 carat behemoth still sold for a highly respectable $21.8 million.

Described as ‘egg-sized,’ the historic diamond was fashioned into a pear shape shortly after its original extraction. Finishing with G color, thus technically falling into the near-colorless category, and very slightly included (VS1) clarity, a high grade with no visible imperfections, the billions-year old crystal, transformed into a sparkling finished gemstone two decades ago, captured worldwide attention when it was offered for auction by Christie’s Geneva in May.

The 15.10 carat “DeBeers’ Blue diamond was sold in April by Sotheby’s Hong Kong. Four participants kept raising the stakes until the gavel finally fell at $57.5 million, smashing the auction house’s pre-sale estimate of $48 million. The figure paid is equivalent to 99.9% of the highest price ever paid for a blue diamond, the 14.62 carat “Oppenheimer Blue,” sold in 2016 for around $70K more, which Sotheby’s proclaims a “near-tie.”

Blue is among the rarest color seen in natural diamonds. The world’s most famous blue is the 42.52 carat Hope Diamond, which happens to be the most visited item at the Smithsonian in Washington D.C. In addition to its topmost fancy vivid blue designation, the 15.10 carat DeBeers’ Cullinan Blue has internally flawless clarity. This makes it ‘naturally perfect’ in the eyes of many professionals and enthusiasts.

Why are we talking jewelry right now?