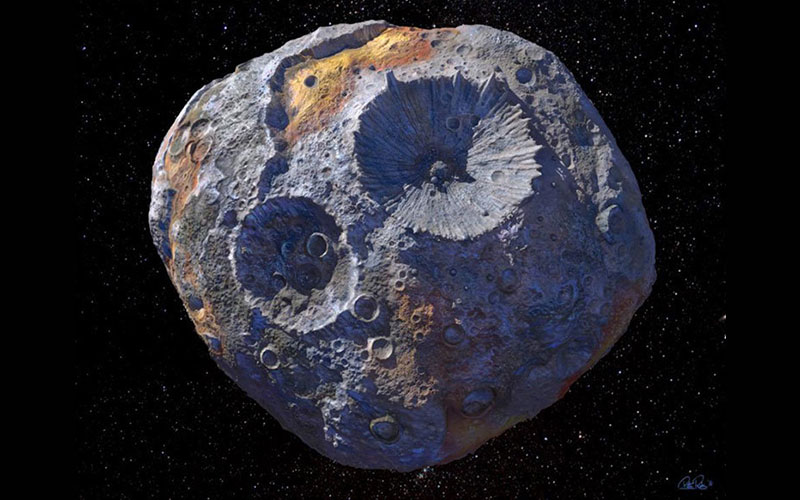 This valuable asteroid composed entirely of iron and nickel drew to within 1.6 astronomical units (AU) of Earth over the weekend. Discovered by Italian astronomer Annibale de Gasparis in 1852, 16 Psyche is one of the most massive objects in our solar system, aside from the planets.

If you’re in the USA grab your telescope or good binoculars, escape light-pollution, find an elevated position and look to the north. 16 Psyche will be in the constellation of Taurus, rising around the same time the sun sets and setting 20 minutes before sunrise. With an apparent visual magnitude of 9.38 magnification is required to spot this high-value celestial object.

The composition of 16 Psyche is extremely dense and metallic and made of iron and nickel, according to a paper by planetary scientist Tracy Becker and team published in The Planetary Science Journal. These metals are often found in the dense metal cores of planets. 16 Psyche’s heart is much like Earth’s, which means that it could possibly be the heart of a lifeless world that suffered from violent collisions.

Shaped somewhat like a potato (or perhaps the Death Star to Star Wars fans) 16 Psyche measures 173 miles, by 144 miles, by 117 miles. Positioned between Mars and Jupiter, the protoplanet takes about five of our years to complete one orbit of the Sun, but spins on its axis every four hours, which constitutes one Psyche day.

There is a planned orbiter mission to explore 16 Psyche. That launch is scheduled on a SpaceX Falcon Heavy rocket in August 2022. Following a Mars gravity-assist in 2023 he Psyche spacecraft will cruise on to reach the asteroid in January 2026, thoroughly mapping it on an orbital mission scheduled to last 21 months. At that time we may better determine whether it’s a metallic asteroid, a protoplanet or a core from a planetismal that formed and was then destroyed. As Dr. Becker observes:

That’s what makes it interesting because when we get there we’re going to find out what is going on.