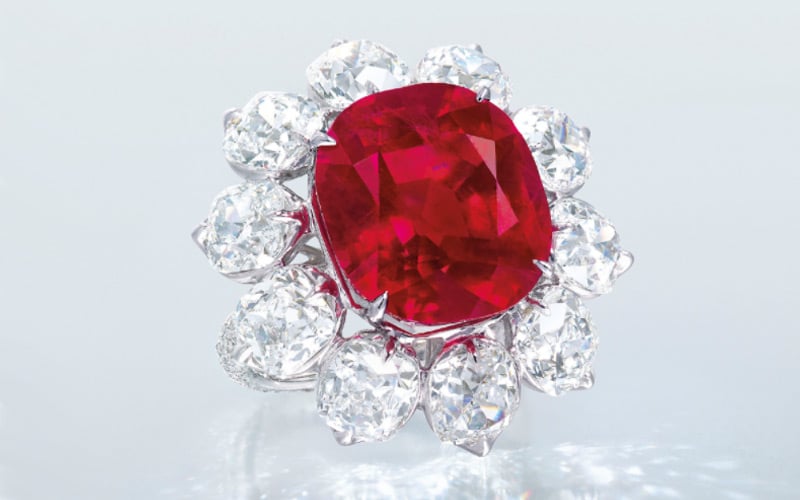 Happy Birthday, July Babies. You crabs and lions of the zodiac. You lovely summer souls (in the northern hemisphere, that is). You, who enjoy a special birthstone with special, distinctive color.

The mineral corundum is naturally colorless but trace elements of iron, titanium and chromium can cause it to present in a variety of colors, including blue, yellow, orange and green. In such colors the gemstones are called sapphires. However if chromium is the only trace element, and the mineral has enough saturation to become red, we no longer call it a sapphire. That special stone is hailed as the birthstone of July – the ruby!

The ruby and its sapphire cousins have been largely considered the most important and significant colored gemstones for thousands of years. On the Mohs scale it rates a 9, the next hardest mineral to diamond. And while corundum is 140 times less hard than diamond it’s seven times harder than topaz, which is the next crystal down on the Mohs scale. Its melting point is also very high, 2050 degrees C, making it a popular, durable choice for jewelry.

We’ll start this “magnificent seven” with a magnificent sunrise.  Sotheby’s achieved a world record price for the Sunrise Ruby in 2015. This 25.59 carat Burmese ruby, mounted by Cartier, was able to command a final bid of 28,250,000 Swiss Francs, or nearly $31 million before it rode off into the sunset with its new owner.

The ancient Sanskrit word for ruby is “Ratnaraj,” which translates to “King of Precious Stones.” They have historically been worn by royals to signify majesty and wealth. Less than 10% of all gem-quality rubies, like those featured here, have no artificial treatments to enhance their color. Even fewer have the phenomenal effect known as asterism, where inclusions align in a way which creates a “star” when the gem’s crown is cut en cabachon (spherically). This “Star Ruby” and diamond ring created by Tiffany & Company sold for 875,000 Hong Kong Dollars, which is nearly $113,000.

Those celebrating birthdays this month have a famous gemstone-name-in-common with April babies. The Hope Ruby is a stunning 32.08 carat cushion cut Burmese ruby set with diamond accents in a ring by Chaumet. It sold in 2012 for $6.74 million, then the highest ever price for a ruby sold at auction. It derives its name from the Christie’s Jewels For Hope charitable auction

You may have noticed rubies from Myanmar, formerly Burma, are some of the most famous. First brought to Europe by Marco Polo in the 13th century, they have historically generated excitement among collectors. That was certainly the case when The 15.04 carat Crimson Flame Ruby came to auction in December, 2015.  Its near-perfect crystallization and appealing color, offset with colorless diamonds, fetched 141,800,000 Hong Kong Dollars, which is just under $18.5 million.

Recognized as one of the finest rubies in the world, the Alan Caplan Ruby is a 15.97 carat cushion cut Burmese ruby. Named after a famous mineralogist and gemstone dealer, it remained in Alan Caplan’s collection until 1988 when it was sold for a record-breaking price at a Sotheby’s auction in New York. The hammer fell at $3,630,000, the highest ever per carat price at the time ($227,301 pc) for a ruby sold at auction. It was purchased by Laurence Graff who mounted it as an engagement ring and sold it to the Sultan of Brunei, his favorite customer.

Perhaps once Laurence Graff experienced the taste of ‘pigeon’s blood’ (or at least the sight of it) he was hooked? He set another record, at the time, for the highest price per carat ever paid in 2006, this time for an 8.62 carat cushion cut Burmese ruby, won for $3,637,480 ($425,000 pc). Seen here, set in a Bvlgari diamond bombé mount.

The “Burmese Ruby and Diamond Tiara,” crafted by The House of Garrard in 1973, was commissioned by Queen Elizabeth II herself, to include 96 rubies gifted to her on her marriage from the people of Burma. The gemstones were set in a series of rose motifs and the design incorporates a heraldic rose, combining white and red petals as the Tudor rose.

That number 96 has significance. The Burmese people believe rubies have healing properties and will protect a wearer from 96 diseases that can afflict the human body. They wanted to ensure that the Queen remained hale and hearty.

For years and years, that has certainly been the case.

Long live The Queen… Long live us all.  And happy birthday, July babies!

What is ‘Diamond Quality?’