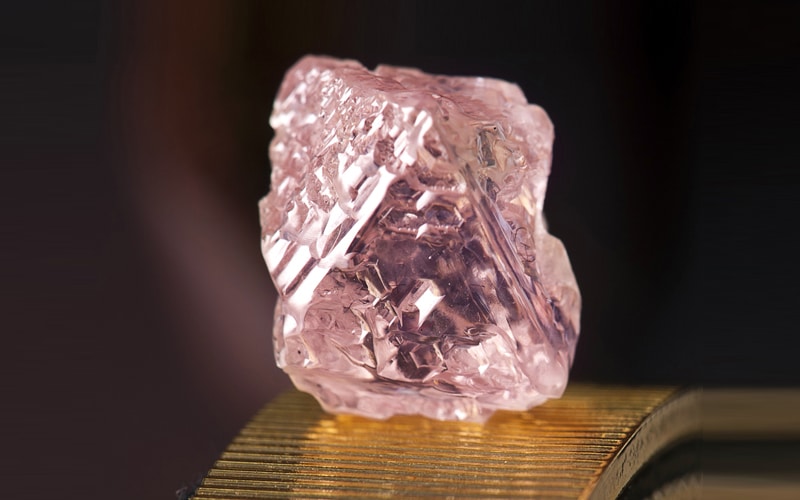 They all felt let down, unbelievably down.

The year was 2012. They had been smacking their lips at the Argyle diamond mine in Western Australia. They were hungry to receive the $10 million the beautiful, rare 12.76 carat (rough) pink diamond unearthed in late 2011 would bring them.

Rio Tinto, the mining company that owns Argyle, was already passing it off as the largest and most expensive diamond of its kind ever found on the entire terraqueous globe.

Alas, evil fate! Guess what was left of the huge diamond after the cutting process?

There were indeed a good 8.00 carats, but that $10 million melted like ice-cream in a hot sun as soon as plenty of flaws appeared at sight, well highlighted by the cutting – including one major “internal fault line” – causing the price to drop more than Greek bonds when stock markets open on Monday mornings.

But what was so devastating with that “internal fault line?” What was it about that twinning or separation line – that is to say a fine feather, aka monstrous fracture or cleavage – which destroyed all ambition so miserably?

Just think. It had already been given the august name “Argyle Pink Jubilee.” And with that noble family name it should have become, in the near future, the fatal attraction of all international auctions held for the sale of Argyle pink diamonds. In short an exceptional specimen – never before seen throughout the 26-year life of “Mother Argyle” whose womb has produced more than 90% of the world’s pink diamonds – and as the stoic old lady enters her final days we will surely never see its like again.

This diamond was a unique piece in history which could have ousted even the royal Williamson Pink – royal because it ended on a royal brooch, given as a royal wedding gift to the very royal Queen Elizabeth II. And even Christie’s – which is Christie’s – has knocked down only about 20 pink diamonds above 10 carats in nearly 250 years of history, quite a big deal.

We must also take into account the two months of study and planning of the shaping process by the skilled cutter who was assigned the difficult task, with the result we have now seen: That gentle pink color historically belies difficulty under the skin. Was it so hard to predict the result?

The Argyle Mine is, without a doubt, one of the greatest diamond mines in history. Not simply the majority supplier of our world’s most saturated, high quality pink diamonds; “Mother Argyle” is geologically one of a kind, ensconcing her precious gems in lamproite. And our dear pink mother was among the first mines committed to benefiting indigenous people, protecting local water, air & wildlife and rehabilitation after use.

It makes me wonder, was that finished pink monster so disgusting? Hard luck, to be sure. Yet, as the saying goes, “better a diamond with a flaw than a pebble without one.” It still makes me want to cry, thinking of what could have been mentioned in gemology books in the years ahead. Our pink mother and her most significant child surely deserved better.