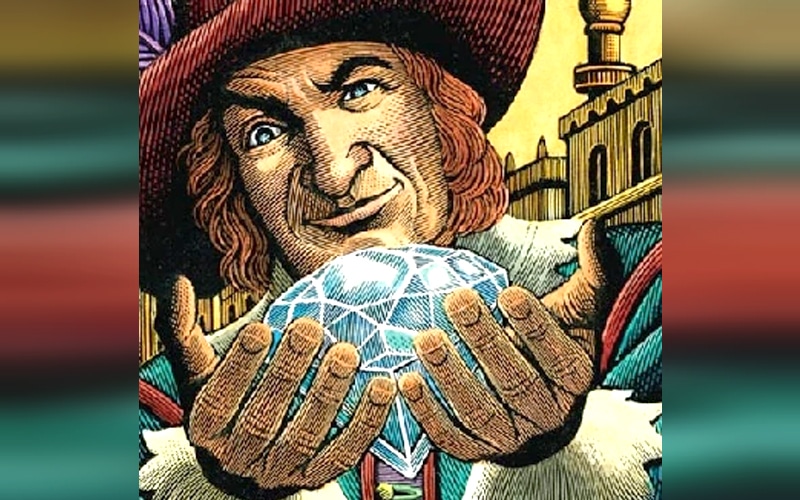 A humble mapmaker’s son travels the ancient world, discovers fantastic treasures, rescues a damsel and rises to the highest levels of French aristocracy.

If you don’t know it, “The French Blue” is a terrific read for true-lovers of diamonds, gemstones, travel, excitement and romance.  Based on true events, the book recounts the remarkable voyages of Jean-Baptiste Tavernier, a 17th Century trader of precious gems best known for discovering the phenomenal 115 carat blue diamond which later became the French Blue and, ultimately, the Hope Diamond.

Author Richard W. Wise, takes factual events and blends them with plausible speculation to create a long and delightful tale; rich in history, action and romance. It could have been a far longer saga, in fact. The author states that before editing to 584 pages his book was over 1300 pages long. I find his editing prowess sustained richness and kept the pages turning.

A young Tavernier sets out from Paris in 1631, making six increasingly distant voyages across Europe, to Persia, India and other faraway lands. For forty years he is both trader and emissary; growing in stature as a foremost expert on precious gemstones. In this revered capacity he is introduced to distant sovereign leaders and gains access to mystic lands where no foreigner has gone before.

Wise composed “The French Blue” in first-person, drawing on Tavernier’s own writings to set the book’s tone. This helps ensconce the reader in the story; one can almost see the sights, hear the sounds and smell the smells of the old world as Jean-Baptiste must have perceived them. From the battlefields of Europe to the lands of the Great Mogul of India to the forbidden mines at Ava, Tavernier’s exploits cover thousands of miles.

And what a cast of characters: Haughty aristocrats, powerful sheiks, cagey miners, superstitious pearl divers, fanatical bandits, corrupt politicians and beautiful women come alive in the book’s 56 chapters. Tavernier’s compatriots are a set of diverse co-stars and the heroine of “The French Blue” is imagined as an exotic, strong-willed beauty from a faraway land. The author takes some inventive liberties to fill out the story, including a particularly amusing exchange with the infamous Cardinal Richelieu, but most of the events and main characters described are real.

The book has dozens of illustrations including Tavernier’s own drawings of extraordinary gemstones. Wise is an accomplished gemologist and writes from a position of authority on the subject. His descriptions of gems, pearls and jewelry are historically accurate and elegantly delivered. Fellow professionals will enjoy period descriptors such as “finest water,” tales of diamonds from Golconda, rubies from Ava, and encounters with the legendary British East India Company. Tavernier’s clever haggling will draw smiles from experienced gem traders: Bargaining with the poorest miners or striking deals with the King of France, the rhythm of the trade employs a familiar parry and thrust which echoes down through the ages.

“The French Blue” vividly communicates the challenges Tavernier endured. Away from home for five years at a time, he lives in alien environments facing unexpected challenges and unimaginable risks. In those days a chance encounter with bandits, unexpected sickness or a simple storm at sea could quickly end a man, his business or his family fortune. Tavernier’s ambitions dance with calamity as well as success. His shrewd decisions and keen diplomatic abilities are matters of record and remind us why such pioneers are worthy of the respect history affords them.

It’s been 10 years since I picked up this book but I needed a quarantine-companion and this was like an old friendship revived. As with the original friendship I (selfishly) didn’t want the forty-year saga to end. Of course, the story of The French Blue itself continues past the end of the pages. After passing from his hands, Tavernier’s fantastic 115 carat find was renamed, recut, stolen and eventually crafted into the legendary 45.52 carat Hope Diamond which is on-display at the Smithsonian today.

Much ago about blue

If you enjoy theater, there’s a collection of videos with actor George Bergen playing the part of Jean Baptiste Tavernier on the author’s YouTube channel. More entertainment and information can be found on the French Blue’s own Facebook Page.

There is also a page on the Octonus website where a theoretical 3D model and robust gemological information on The French Blue has been posted. It’s a fun hop down the rabbit’s hole for those of us who love technical “romance.”

“The French Blue” is a true treasure-hunt by a real Renaissance man. I believe professionals and novices alike will enjoy this fantastic journey into the swashbuckling 17th Century.

You can find more information on the book’s website: TheFrenchBlue.com