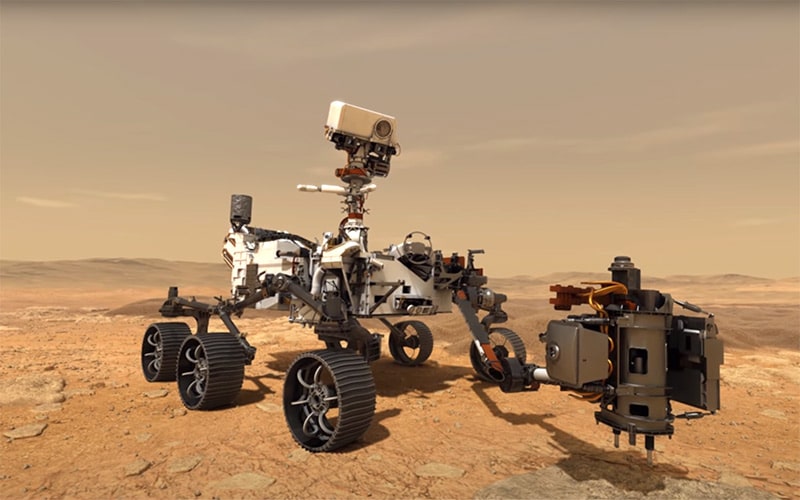 After flybys, orbits, and rover-landings, a future Mars mission will bring stone samples from the red planet back to Earth.

We have some time before this happens, and I’m certain the motivations are scientific. Nevertheless, geology and gemology are both ‘ologies and we know Martian gemstones exist. So, what might we expect from Mars?

Credited as the first gem discovered on another planet, peridot was first seen by the Mars Global Surveyor: MGS or “Migs” according to me.

Good old Migs reported the discovery after arriving to Mars in 1997. Her discovery was confirmed during a Mars landing in 2003, prior to the end of her mission in 2007.

Thank you, Migs. I’ll always remember you bringing that thrill to gemstone lovers around the world.

Chris uses an advanced technique called reflectance spectroscopy to identify minerals on the surface. The yellow-brown areas in this image denote olivine. In fact, research shows that green peridot crystals, in the form of its geological cousin olivine, occupy nearly 19,000 square miles of the surface!

In 2013 Chris and Reco sent us this photograph highlighting minerals present in a Martian crater. If you look at the colored area within the crater, the pink areas are deposits of hydrated silica, better known to most earthlings as opal.

Scientifically, the presence of opaline silica informs us that water could have existed on Mars in the past, raising the real possibility of ancient Martian life! Adding to that, I believe a red-planet opal would make a lively pendant, especially when worn with a pair of Martian peridot earrings.

Back to our friends:

October babies, don’t be put off by the monochromatic appearance. The Planetary Society explains why Hi-RISE gave us such a blue hue.

The colors of the landscape don’t appear as they would to the human eye, because instead of the usual red, green, and blue components of photographs, this image comes from infrared, red, and blue/green sensors.

So exciting. Martian Opal! What colors? What character? What flavors? When can I have a pendant?

Let’s return to the more colorful images produced by Chris and his pilot, Reco.

They outdid themselves with this incredible photo of the Martian “Grand Canyon” (thank you, boys). What I find delightful about this image is the primary mineral Chris is showing us. The canyon is filled with pyroxene, in both high and low calcium concentrations. And while I am no astro-geologist, I do know two of the clinopyroxene minerals happen to be jadeite and spodumene.

It’s just a theory, of course, but some scientists theorize the possibility of gold on Mars, simply because the planet has much the same composition as Earth. Considering how much volcanic activity has occurred on that violent red planet, I’d like to believe Martian pyroxene could have crystallized in the monoclinic system… Hello, Martian Jade.

NASA’s most recent activity on Mars involves the historic nuclear rover: Perseverance or “Percy,” according to everyone.

Percy will be collecting samples to be recovered later, by an Earthbound spacecraft. As described by JPL’s Lead Flight System Engineer Jessica Samuels:

We have a drill on the end of our robotic arm, and as we are drilling the surface of Mars we will be collecting pieces of Mars into the sample tube… After we’ve collected a diverse set of samples we will drop them off onto the surface, and have them there for a future sample return mission to continue.

“A diverse set of samples…”

Just look at those smiles. Of course these are science professionals, focused on epic discoveries which could reveal water and life in the red planet’s past. As a human being I am quite keen on that. Meanwhile, I have to admit “diverse samples” has visions of peridot and opal dancing in my wee little head.

Dear NASA. If you need someone to chair your Martian Gemstone Analysis Committee I will donate my time. xoxo

Normally, civilian agencies would be required to declare gemstones to U.S Customs and Border Protection when entering the country. Fortunately Percy’s power system is nuclear. The mission is driven by a Multi-Mission Radioisotope Thermoelectric Generator: MMRTG, or Mister Tee-Gee according to me. Mister Tee-Gee is along for the ride, literally, as a result of partnership between NASA and the United States Department of Energy. By partnering with a federal agency I’m confident any Martian gemstones will have no frustrating delays upon import. Nice work, NASA.

If all goes according to plan, scientists will get their hands on these rocks in just over 10 years. That’s a dreadfully long wait, but it gives us all plenty of time to consider custom-designs for Martian peridots, opals, jade – or anything, really. After all, IGI classifies gemstones as beautiful, durable and rare. By that definition any stone brought from Mars will rank with the most precious gemstones ever. According to me.

So keep pushing, Mr. Tee-Gee. Percy has work to do. Give our regards to Chris, Reco, Hi-Rise and good old Migs.

25 Year Extension for Lucara in Botswana