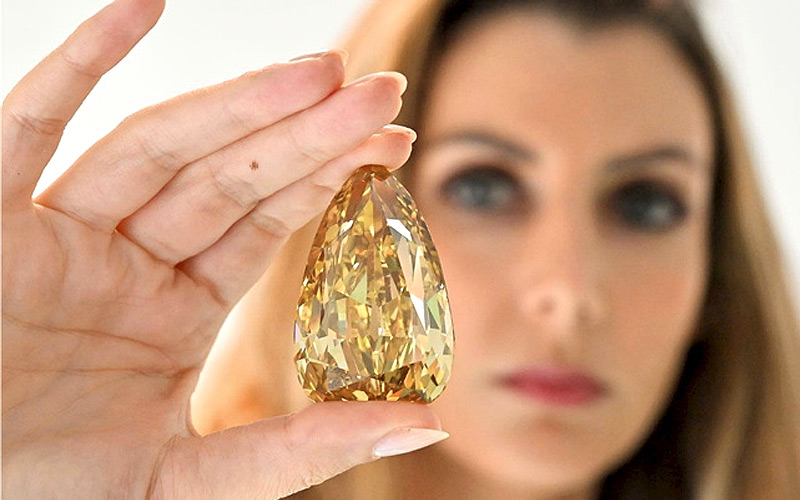 In the 1980s a young young girl in Africa decided to explore a pile of rubble located near her uncle’s house. The pile of discarded stones was made up of worthless ore, rejected from the DRC‘s nearby MIBA Diamond Mine. While playing she found a large golden-colored rock in the pile and took it home to her uncle. That piece of ‘worthless rubble’ turned out to be an 890-carat rough diamond, one one of the largest raw crystals the world had ever seen.

Sold it to local dealers by the girl’s uncle, the golden diamond made its way from Africa to Antwerp Belgium, where it was celebrated for its size and quality. “The Incomparable” 890-carat rough diamond underwent a tour of museums, starting with the prestigious Smithsonian Museum of Natural History in Washington, D.C. It also appeared at the American Museum of Natural History in New York City and the Muséum National d’Histoire Naturelle in Paris.

Originally cut into a 407.5 carat shield shape, sold at auction in 1988, the design of the exceptional diamond was recently re-imagined using advanced technology, whereupon it was fashioned into its current form; a 303.1 carat Fancy Deep Brownish Yellow Internally Flawless classic pear, named The Golden Canary.

The owners recut the Incomparable to maximize the depth of its color, brighten its hue, and improve its shape.

Bidding Started at $1 and quickly reached the millions. When the round was complete, the gavel had fallen at a price of $12.4 million. While somewhat lower than the presale estimate of $15 million, the Golden Canary becomes third most valuable yellow diamond ever sold at auction.

Fancy yellow diamonds make up just .006% of all diamonds mined, and of these, only a tiny percentage will be internally flawless. Its impressive combination of size, saturation and cleanness make the Golden Canary an exceptional rarity. It can also be considered a “rescue diamond,” saved to the delight of diamond lovers everywhere.

The Magnificent Jewels Sales raised a total of $50m, with 81 per cent of lots sold.

RJC and WDC join forces on Sustainability and Sourcing