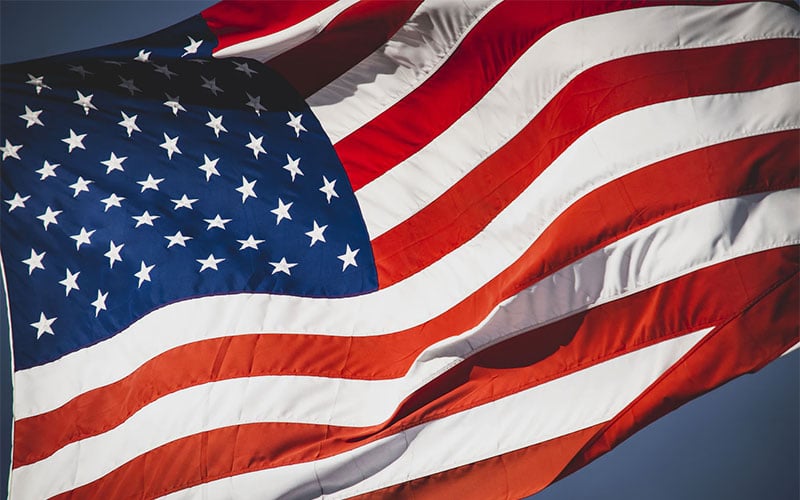 Did you know that Americans eat 150-million hot dogs on the Fourth of July? It’s true. And right now, at this moment, there are delicious hot-dog, hamburger, steak and brisket barbecues occurring across the USA. There are potato salads, crisps and coleslaw. There’s corn on the cob and baked beans. A bit later there will be cupcakes, ice-cream and other sweet treats. Families will safely gather for games, backyard movie-nights, fireworks and socially-distant sparklers.

I was inspired by a pair of recent GemBlog posts to mark America’s birthday with the sparkle of three American gemstones, all local to the USA, in her three patriotic colors.

We first celebrate Red Beryl. An extremely rare variety of beryl, and a cousin to Emerald, Aquamarine and Morganite, red beryl has only been found in the USA and Mexico. In fact Utah’s Ruby Violet mine is the only source of crystals suitable for cutting. That claim was operated by another iconic American sparkle-maker, Tiffany & Co., prior to its depletion in 2001.

The Utah Geological Survey estimated that one crystal of red beryl is found for every 150,000 gem-quality diamonds and the Jewelers Association designated red beryl as the world’s rarest colored gemstone in 2006. Wow, look at U-go, Utah.

The Esperanza Diamond was discovered in 2015 at Crater of Diamonds State Park in Arkansas. Confirmed to be Type IIa (Golconda) D color, which is the most colorless, whitest diamond material, it’s clarity was graded internally flawless. The amazing Esperanza, named after the Spanish word for hope as well as the niece of the diamond’s finder, weighed 8.52 carats in the rough. It was cut and polished, also in Arkansas, set into a pendant by a USA jeweler and slated for an auction that was interrupted by Winter Storm Stella.

A popular destination for amateur miners, park visitors may actually keep any gemstones they find. More than 75,000 diamonds have been unearthed there, including 29,000 found and taken home by happy campers since it became a state park.

It took more than 100 years for Yogo Sapphires to start getting attention in the jewelry trade. Sapphires were first discovered in Montana in 1865, in alluvium along the Missouri River. In fact renowned American gemologist George Kunz recognized their beauty in the early 1900s, but a series of commercial and geopolitical complexities had prevented them from market recognition.

Typically cornflower blue, Montana’s precious stones span a wide range of tone and saturation, including deep blue. There are four locations in Montana where sapphire can be found but only one primary deposit (the others are alluvial) at Yogo Gulch. Those sapphires are frequently identified as Yogo Sapphire whereas “Montana Sapphire” refers to gems found in other Montana locations.

And there you have it

Three American “rock” stars. The three “big ones” – diamond, corundum and beryl. All USA-born and bred (or polished, as it were). I would like to close by noting that all of the red, white and blue sparklers I have featured above are available for purchase. You’re free to chase the entire patriotic collection.