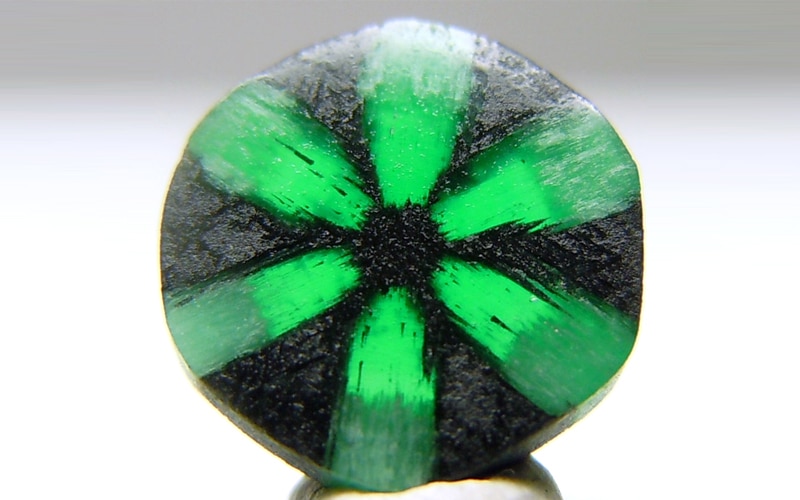 Have you ever heard of “trapiche” gemstones?

Those elegant six- pointed stars, so unique, so rare, so peculiar, such as emerald-beryl, ruby-corundum and sapphire-corundum, garnet, tourmaline and chiastolite?

That last one – andalusite with carbonaceous-clay inclusions arranged in the shape of a cross – has a four-arm radial structure, instead of six arms, of course, and with its brownish-yellow color, it would look great with an autumn outfit (except where it is regarded as a religious symbol) that suits any season and any look, with a suitable setting.

What about trapiche corundum?

If I were you, I wouldn’t miss the opportunity to enhance your presentation with something unusual and unique. And while the name is not as catchy as the names of the classic red-blue-and-green triad, or the equally famous tourmaline and garnet – given the chance, would you spurn the chance to put your hands on a Burmese “trapiche” ruby or on a Cambodian “trapiche” sapphire?

The former, which appeared on the market quite recently (it was 1995), was found not only in Cambodia, but also in Guinea, Kashmir, Pakistan, Nepal, Sierra Leone and Tajikistan. The latter, discovered in Cambodia soon after its red cousin (1996), also turned up in Australia, China, France, Kenya, Madagascar, Nepal, Sri Lanka and Tanzania. We’ll make special mention of Burma (Myanmar) – which basks in a cornucopia of natural wealth – and is generous in quality but tight with quantity of “trapiche” gems. So when coming from this country, according to the law of supply and demand, the translucent blue material is worth $US several thousand per carat, as most of the material extracted is semi-translucent to opaque.

Not bad for a “trapiche” sapphire, isn’t it? Luckily, in nearby Vietnam, the same variety costs around $US 50 per carat (!) and that for 5 to 50-carat gemstones. Despite the increasingly high demand for these gems the supply is still limited, which is why prices (which doubled in the past 6 years due to their better qualities) will stay high, ensuring excellent investment retention for those who invest in the rarity factor.

Originating from Colombia, they were discovered in the third last decade of the 19th century – and named in 1879 by the French mineralogist Emile Bertrand; trapiche de caña de azucar, meaning “six-spoke wheel of sugarcane crushers.” That is exactly what they look like, with six arms symmetrically arranged in a hexagonal pattern, radiating from or intersecting at the central core.

That core has hexagonal prismatic structure and growth. It is (of course) green, with green arms, when coming from Penas Blanco, while it presents with a dark inner core, with dark arms surrounded by green emerald, when coming from the Muzo area. The dark color is due to carbonaceous inclusions.  Let’s be clear, the properties are the same as the emeralds in both cases, since emerald it is, with some changes in transparency – cloudy and translucent – like dyed chalcedony. 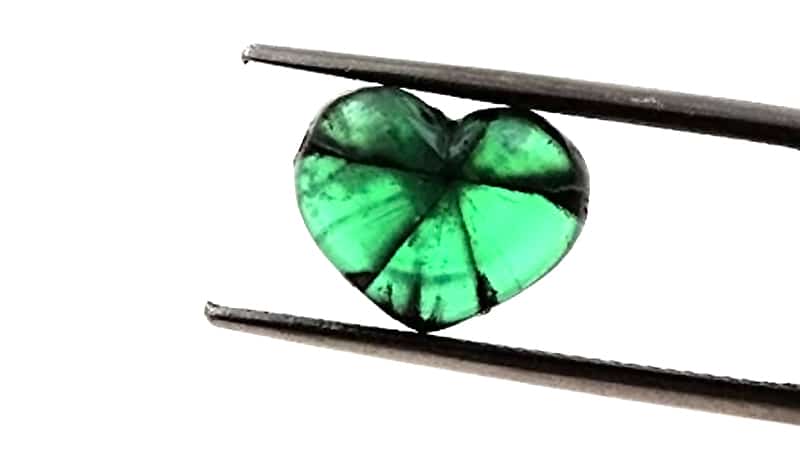 Yes, Carmel as in Mount Carmel, Israel, mentioned in the Bible as the place where the prophet Elijah lived, in the 9th century BC.

Now you’re free to think of the weirdest sci-fi theories about divine intervention or cosmic and even UFO influences, but the fact is that a mineral harder than diamond was recently discovered right where the venerable prophet laid his head. Never found before on the whole terraqueous globe, and previously considered of extraterrestrial origin we’re speaking of allendeite, found in the Allende meteorite which crashed into Mother Earth in 1969.

This mineral is a compound of aluminum, titanium and zirconium (very similar to sapphire, except for the poor iron, which has vanished from the radar). Black, blue-green or brown-orange in colour, and included in the Registry of the International Mineralogical Association under the name of Carmeltazite, the very rare and valuable newcomer was promptly renamed Carmel Sapphire. This is because it was likewise found in the fractures and fissures of that corundum variety – hitherto hidden from the sight of most people over there – and that it was used as a gem for high-end jewelry. This is what the Israeli mining company decided, committed to drilling the Zevulun Valley on Mount Carmel in search of something useful from the 14 effusive eruptions that affected that region of the Holy Land, in the Cretaceous Period, some 145-65 million years ago, bringing to the surface minerals that formed at depths of 29 km.

Diamond Mine For Sale in South Africa

Dispersion and fire are not the same thing