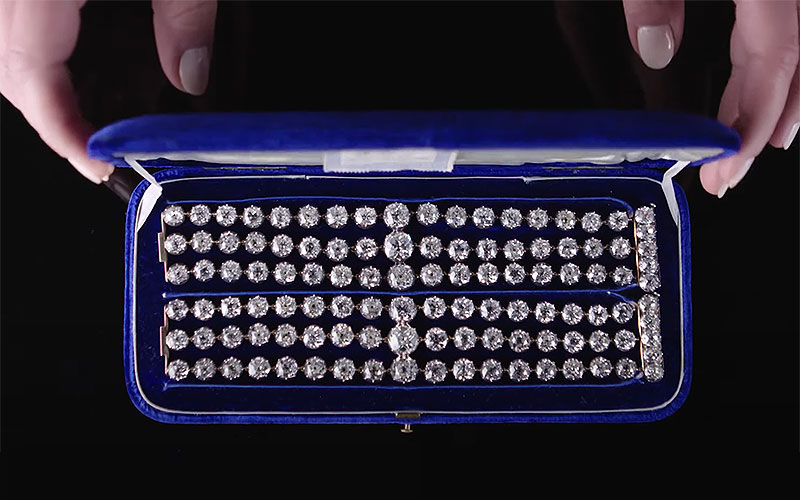 On November 9 a pair of three-strand diamond bracelets, formerly owned by Marie Antoinette, smashed expectations at Christie’s Magnificent Gems Auction in Geneva, when they sold for 7,459,000 Swiss Francs (more than $8 million), several times more than their pre-sale estimate.

Never before, in my 30 years working as a jewelry historian, have I seen a piece of jewelry made with diamonds which used to belong to Marie Antoinette, and still set in the exact same design as mentioned in the inventory of the jewels sent by Queen Marie Antoinette to Brussels in 1791.

The video overview provided by Christie’s is an elegant retrospective, showcasing the breathtaking jewels as it briefly details their unique provenance.

Marie Antoinette moved from Vienna at the age of 14 to marry the future King of France, Louis XVI. She would become the most famous French queen of all time, her name synonymous with glamour and style.

In 1776 Marie Antoinette purchased a pair of beautiful diamond bracelets from her personal jeweler, Charles Auguste Boehmer, for 250,000 livre.

In a 1785 portrait Marie Antoinette is depicted proudly wearing the bracelets joined together as a chatelaine.

When the queen was imprisoned at the Tuileries Palace during the French Revolution she meticulously packed up all her jewels in a wooden chest that was sent out of France to Brussels for safekeeping.

Under layer upon layer of stuffing pads, inside the chest, was the late Queen of France’s most valuable property, including a pair of bracelets where three diamonds – with the biggest set in the middle – form two barrettes.

Marie Antoinette’s only surviving child, Madame Royale, received her mother’s jewelry when she arrived in Vienna in January, 1796. She is depicted wearing the bracelets in a portrait by Antoine Jean Gros.

Her niece, the Duchess of Parma, inherited the diamond bracelets which passed to her son, Duke Robert of Parma. Photographs of the bracelets in his inventory of 1907 confirmed that they had been kept within the family for over a century.

These diamonds, owned and worn by the most famous Queen of France, are inextricably interwoven with the rich drama and history of the Marie Antoinette legend. Their illustrious provenance provides a moving glimpse into European royal history.

Learn more in this feature article by Christie’s.