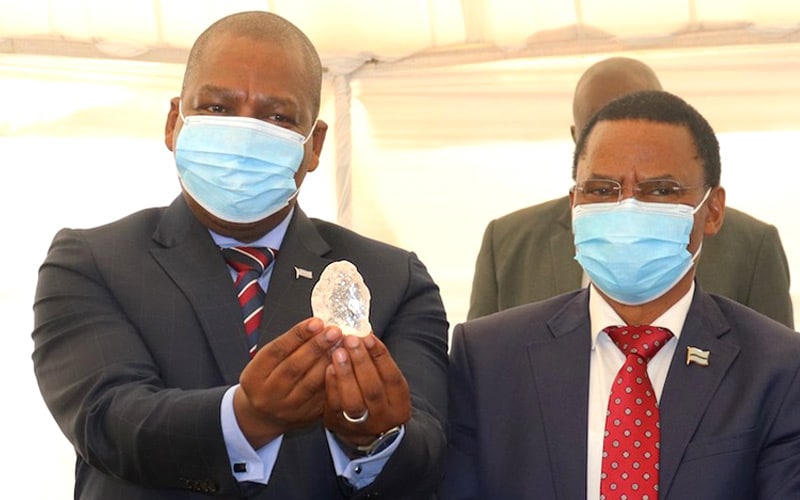 Botswana’s Jwaneng diamond mine, the world’s richest by value, has just produced the third-largest gem quality diamond ever found. At 1,098 carats this record-setter is just a fraction lighter than the 1,111 carat Lesedi La Rona, unearthed at the Karowe mine in northern Botswana in 2015.

This post will cover each of the top four diamonds ever unearthed, three of which have been found in Botswana.

Diamonds account for approximately 90% of Botswana’s exports and more than 65% of DeBeers’ diamond production.

Debswana, the historic agreement between the mining giant and the government of Botswana, is responsible for transforming the landlocked African nation into one of the continent’s most prosperous. Debswana’s acting Managing Director, Lynnette Armstrong commented:

This is the largest diamond to be recovered by Debswana in its history of over 50 years in operation. From our preliminary analysis it could be the world’s third largest gem-quality stone.

Measuring 73.00 by 52.00 by 27.00 mm, the new discovery was presented to the country’s president, Mokgweetsi Masisi, on Wednesday.

LARGEST DIAMOND EVER RECOVERED BY DEBSWANA

It is the largest gem quality diamond in the company’s history since diamonds were discovered in Botswana in 1967.

Lesedi La Rona was fashioned into 67 separate polished diamonds, including this gigantic 302.37 carat emerald shape, the world’s largest square emerald-cut diamond. Another 66 diamonds, polished from pieces of the Lesedi La Rona, range from 1.00 to 26.00 carats.

The second largest rough diamond in history, overall, weighed 1,758 carats. Discovered in April, 2019, also at the Karowe Mine in northern Botswana, the dark crystal was named Sewelô (“Rare Find”). Measuring 83.00 x 62.00 x 46.00 mm, which is approximately the size of a tennis ball, it was purchased by the French luxury brand Louis Vuitton, despite doubts about its suitability for jewelry applications.

The Cullinan: The World’s Largest

The largest gem-quality diamond ever discovered was the 3,106.75 carat Cullinan, which was extracted from a South African deposit in 1905. With dimensions of approximately 50.00 x 50.00 x 100.00 mm, it was sold to the then-colonial government of the province for 150,000 British Pounds.

The Diamond of Kings and Queens

The Cullinan I and II were frequently worn together by Queen Mary. In similar fashion, Queen Elizabeth II has regularly worn the Cullinan III and IV, combined to form a brooch. One of the most popular crown jewels has been the Cullinan V, an 18.8 carat heart-shaped diamond, originally worn by Queen Mary and seen on her granddaughter on frequent occasions today. It was among the eye-candy featured back in our 2020 Valentine’s Day post about historic heart-shapes.

Cleaning diamonds from the ocean