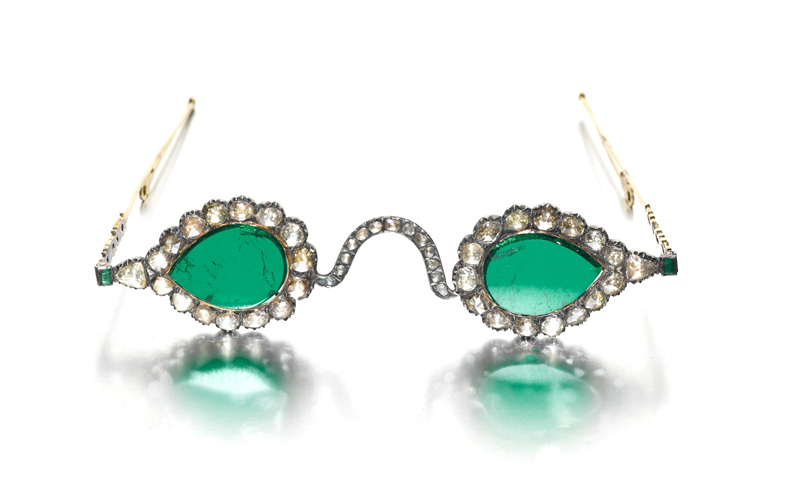 Do you know someone who wears “rose colored glasses?”

It’s a metaphor for optimism. Someone who trusts that any situation will work out just fine, no matter how challenging or dire. In the style of Voltaire’s classes character Candide (bless his heart), someone who steps through life seeing things in a “rosier,” more optimistic way than others do – bespectacled thus in rose-colored lenses.

It’s time to inform your Candide-like acquaintances of a unique opportunity. Roses don’t make durable lenses, but Sotheby’s will be offering the chance to acquire completely unique, fashionable (your mileage may vary) emerald or rose-cut diamond eyeglasses instead. The Sotheby’s “Arts of the Islamic World and India” auction on October 27th features two pairs of eyewear, valued at $2 million to $3.4 million apiece, to the highest bidder.

The lenses in the “Diamonds for Light” glasses were cut from much larger stones during the Mughal era (1800’s) in India. They present with a transparent pale yellow and are cut flat. The sides are faceted and reveal light along the edges without sacrificing transparency. The unfaceted surfaces appear to be almost mirror images of each other, with similar growth features indicating the lenses were close to each other, contained within one rough diamond crystal. The diamond was cleaved, not sawed, confirming seventeenth century creation.

The lenses have a combined weight of nearly 25 carats and most likely came from the prestigious Golconda mines of Southern India. Based on the technology at the time the original rough diamond from which they were fashioned is estimated to have weighed approximately 200 carats! In or around 1890, the the diamond lenses were set into the frame, adorned with rose-cut diamonds, becoming “rose-cut” glasses (which is pretty close to rose-colored).

Green Colored Glasses – Are you Jealous?

The green gemstones in the second pair of glasses, names “Emeralds for Paradise” – intended to reflect religious association of green with salvation and eternal paradise – were also cut from a single stone. The original rough emerald is estimated to have weighed over 300 carats. The lenses are flat with a beveled edge around the upper surface, and match in both saturation and color.

The source of the Emeralds appears to be from Columbia, most likely the Muzo mine in the foothills of the Andes mountains. The Mughal trade with Europe was vigorous in the seventeenth century, and this coincided with the era of the Spanish conquistadors, who were bringing in gems from Colombia regularly. Colombian emeralds are easily identified by their ‘three phase’ inclusions – comprised of a liquid-filled cavity containing both a crystal and a gas bubble – and these inclusions are indeed present within the lenses.

So, your friend who wears those rose-colored glasses no longer needs to settle for a metaphor. They can brandish a pair of rose-cut diamond-framed spectacles with lenses made of diamonds or emeralds – they simply have to be the highest bidder at this auction. But, if that person is an eternal optimist they’ll surely give it go.

In a perfect world – to echo Voltaire – surely they will come away a winner!

How to Buy Diamond Jewelry in 2022