When assessing gemstones, professionals will encounter many with similar colors and essential appearance.

So what is the best approach for separating and correctly identifying gemstones with similar color and appearance? For certain, one of the first and most important scientific determinations is whether the gem’s light behavior is homogenous or heterogenous.

In simple terms, the essential difference between a homogeneous body and a heterogeneous body is whether a beam of light will be broken into two beams after entering the gemstone.

For homogeneous gemstones: Light does not break down after entering the medium. It propagates with a fixed refractive index in all directions (single refraction). This light behavior is known as optical isotropy.

For heterogeneous gemstones: Light breaks down inside the gemstone and propagates with two different refractive indices (double refraction). Unless it comes from a special direction, light becomes decomposed into two polarized beams with perpendicular vibration directions and different propagation speeds. This light behavior is known as optical anisotropy.

The measure of a gemstone’s optical anisotropy is its birefringence. This is often quantified as the maximum difference between refractive indices exhibited within the gemstone.

From the perspective of gemological testing there are reliable tools which can effectively determine whether a gemstone is homogeneous or heterogeneous. 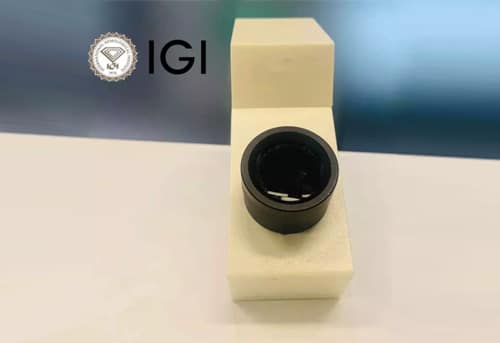 A dichroscope is a simple and portable identification instrument which utilizes a dichroic mirror. Under a dichroscope a homogeneous gemstone displays only one color, while a heterogenous gemstone can display two to three different colors in different directions.

In addition to educated identification, a gem cutter can use a dichroscope to visualize different colors in the rough, identify the strongest and properly orient the stone before cutting to optimize results.

Even when mining, spinels and rubies can be observed through a dichroscope for identification. Spinel is a homogeneous body so only one color appears, whereas ruby is heterogeneous so two colors appear. With that said, there are certain limitations to the instrument.

The more portable and simple the identification device, the more restrictions and limitations it has. For this reason dichroscope analysis is best applied to transparent colored gems. When opacity is present the instrument cannot reliably judge whether the gemstone is homogenous or heterogenous. For example, it cannot separate spinel from ruby in every situation, whereas examination with a refractometer makes the difference between the two clear at a glance.

Chemically, a red spinel is composed of magnesium, iron, oxygen, and chromium, while a ruby is the mineral corundum. But spinel occurs in the same red and blue colors as rubies and sapphires, forms under the same geological conditions and is found in the same rock formations as ruby. Prior to 1783 no differentiation was made between spinel and ruby. A century later the red trickster was still fooling people.

The Timur Ruby is a 352.5 carat gem named after the founder of the Timurid Empire. It was believed to be a ruby until 1851. The spinel was set into a necklace and presented to Queen Victoria in 1853. 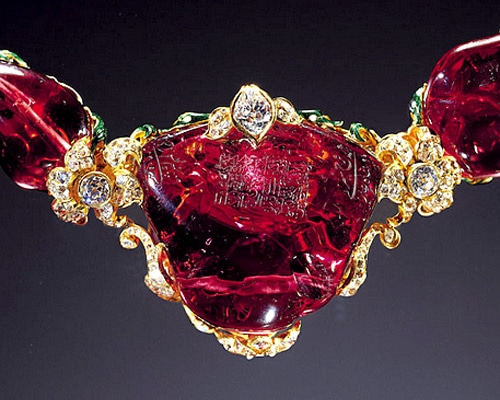 Similarly, the 170 carat Black Prince’s Ruby, one of the oldest in the UK’s collection of Crown Jewels, along with the original red trickster from this post, adorning the Imperial Crown of Russia, were eventually proved to be homogeneous gemstones, and thus spinels. 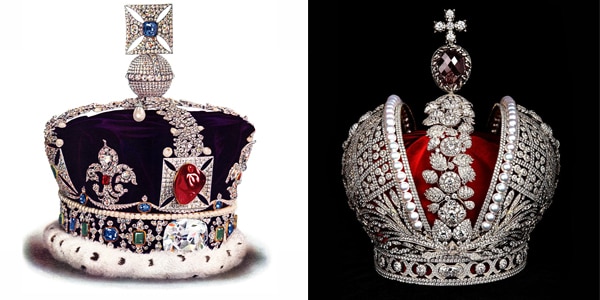