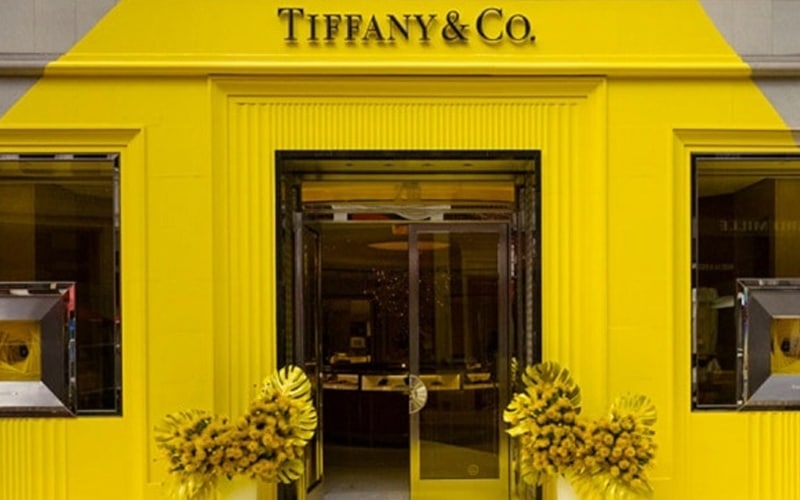 On April 1, 2021, we let out a collective gasp when a yellow Tiffany ring box appeared on the iconic “Blue Box” brand’s Instagram account with the message “Introducing our new House color.”

The next day we were treated to a laugh when the account told us, “Just kidding. We’d never mess with Tiffany Blue®, but we do have some exciting new things in the works.” Nice work, Tiffany. You gained a half-million likes with the stunt, and fooled us all.

Then, less than 90 days later Tiffany made good on the promise of excitement by fulfilling the Fools’ Day foreshadowing with a yellow makeover of their Rodeo Drive store in Beverly Hills, California.

Labeled a temporary change, the striking variation is a clear sign of new branding approaches, since the iconic American Jeweler was acquired by LVMH. It’s rumored that the son of LVMH CEO Bernard Arnault, 29 year old Alexandre Arnault – the company’s Executive Vice President of Product and Communications – spearheaded this attention-getting move.

Tiffany plans to swap in the yellow color in various worldwide locations. The move includes that foreshadowed yellow Tiffany & Co. box and shopping bag, along with yellow furniture, fixtures and collections of yellow diamonds. We can presume some of those locations will be accented with the iconic 128 carat “Tiffany Yellow Diamond,” worn by Audrey Hepburn, Lady Gaga and Gal Gadot.

It’s worth noting that Anthony Ledru was crowned as new Tiffany CEO. Anthony previously worked at Tiffany, as the North American Senior Vice President, before leaving to work for LVMH six years ago. Clearly he returns in an advantageous position, fully aware of the brand’s grand traditions, but having a wider view of what’s reaching today’s shoppers across a wider spectrum.

In the spirit of broadening their reach, the brand recently introduced The Charles Tiffany Setting in the Tiffany flagship store in Hong Kong. Available with round brilliant or emerald cut diamonds up to 5.00 carats, the rings feature a streamlined knife-edge band, harkening back to the iconic Tiffany Setting introduced in 1837.

In 2020 Tiffany announced a program detailing the provenance of the diamonds they sell, beginning with country and mine of origin. The narrative includes each component from mine to market: Where the diamond was unearthed, where it was cut, polished & graded, and details about its incorporation into the finished piece of jewelry. That development has increased urgency in the natural diamond trade for more transparent sourcing.

Since 1837 Tiffany & Company has established the American sterling silver standard, designed the Great Seal of the United States of America, and currently produces the NFL Vince Lombardi Super Bowl as well as championship trophies in several other American professional sports leagues. President Abraham Lincoln purchased a necklace and earrings from for his wife from Tiffany. The colored gemstone Kunzite was named after Tiffany’s Chief Gemologist, Dr. George Kunz. Their flagship store in New York has been featured in countless movies – most prominently Breakfast at Tiffany’s, of course.

The iconic blue color was first introduced in a direct mail catalogue to clients in 1845, a publication still released annually as the Blue Book featuring the world’s rarest jewels. In 2001, Pantone established “1837 Blue” as an official color.

From the 2000 formation of the Tiffany & Company Foundation, awarding over $75 million in grants to conservation and the arts over two decades, to funding the Diamond Source Initiative mentioned above, providing provenance information for every diamond they sell, Tiffany operates with social responsibility and consumer consciousness at top of mind. When Tiffany opened in New York in 1837 the store made a total of $4.98 the first day. Nearly a century later, having expanded to 300 boutiques around the world, the company was purchased by LVMH for $15.8 billion.

When the jewelry store you just purchased designed the Great Seal of its home country, claims the world’s most popular engagement ring style as its namesake and even has its own color – it’s rather spectacular. We look forward to more “excitement.” The yellow thing is fun. Just don’t go changing *too much,* please.

IGI President appointed to the Board of Diamonds Do Good