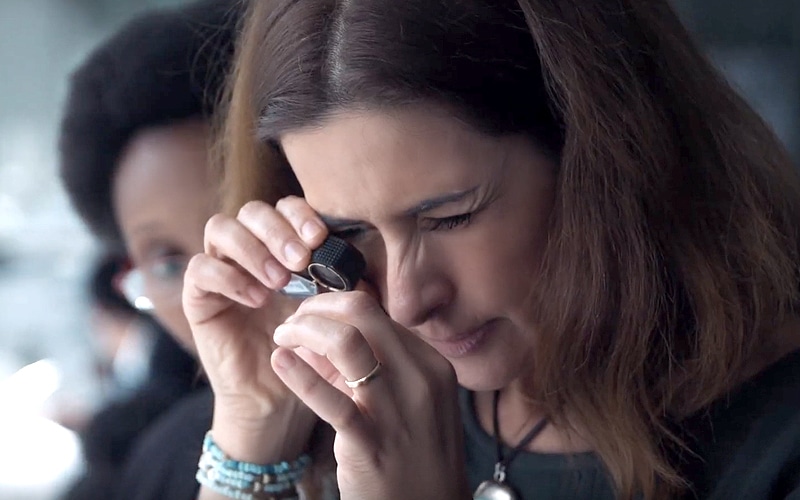 Livia Firth, nee Livia Giuggioli, is an Italian documentary film producer and environmental activist. The wife of actor Colin Firth, she is also the co-founder and creative director of Eco-Age. Director Andrew Morgan and Livia recently teamed up (again) to create the newest Fashionscape documentary.

The Diamonds of Botswana

This engaging 14-minute, 15-second expose follows Livia’s journey to Botswana, to investigate the positive-seeming impact the diamond industry has had on this mid-sized African country.

Of course, human beings have a poor history of maintaining societal equity in areas of the world where rich natural resources are discovered among poor indigenous people. To that end, Livia voiced her concerns.

Coming to Botswana, I was nervous that I would find the imbalance I have witnessed elsewhere. When a single industry generates wealth and has disproportionate power, it can be very dangerous.

But as she interacted with the county’s people a different tale emerged. In the documentary’s first moments Naseem Lahri, managing director at Lucara Botswana, explained that diamonds were discovered there in 1967, just after Botswana’s independence in 1966.  The country’s young government put structures focused on education and employment in place for their emerging diamond industry. Over the last half-century those structures have transformed Botswana from one of the  poorest African nations into one of its most prosperous.

In the spirit of Lahri’s comments, one of the most powerful aspects of ‘The Diamonds of Botswana’ is the uniform passion and pride among those working in the local diamond value chain. It’s not just the principals and mine managers. There are proud tales of mobility, from a gardener who became trained to operate a crane, to an intern who worked his way up to become a mining engineer, and more.

Livia also solicited the opinions of community members. They described how the government has used the diamond business to create jobs and bring empowerment, giving people the ability to solve problems which are not even diamond-related.

The President himself weighed in on the importance of treating Botswana’s rich diamond resources responsibly.

Ethics are critical. Environmental stewardship is critical. Human rights and worker’s right are critical. And what you actually do with the proceeds of what you get is telling of who you are and the values you hold.

His heartfelt comments follow a lighthearted moment in the video, where Livia attempts to “steal” the country’s largest rough diamond ever unearthed, the 1,758 carat Sewelo, by disappearing it into her pocket for a second or two.

The summation of Livia’s experience is an uplifting message which reaches farther than any single country or industry.

Here in Botswana I’ve seen a picture of what can happen when business operates in partnership with government and civil society, making long-term investments in collaboration with local communities and ensure that the benefits are truly shared with those on the ground. I came here to look at a single supply chain. But as my visit ends, I wonder if Botswana represents something even bigger—a new vision for doing business—and if so, it is certainly something that should be protected with vigilance and integrity.

You can see the full 14-minute documentary here – and I urge you to watch it.

Prior to The Diamonds of Botswana, Livia and Andrew Morgan produced a 2015 documentary exploring the clothes we wear, the people who make them, and the impact the industry is having on our world. “The True Cost” was hailed by The Hollywood Reporter as one of the top fashion documentaries of the decade.