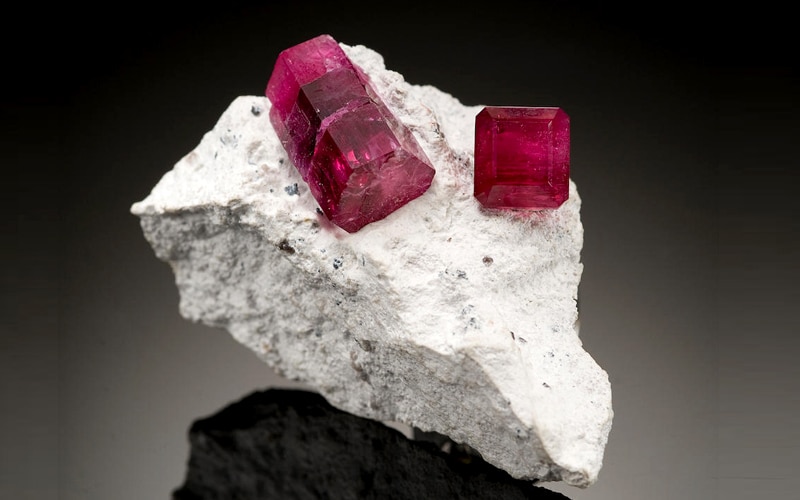 The name beryl comes from the Greek word “Beryllos” which means sparkling or brilliant. The well-known varieties of beryl include emerald, aquamarine and morganite. With Mohs hardness of 7.4-8.0 they are not as hard as topaz, rubies, sapphires or diamonds, but they are all suitably hard for jewelry applications.

In 1904 the gemological world welcomed the discovery of red beryl.

An extremely rare variety of the mineral which gets its red color from trace amounts of manganese, red beryl has only been discovered in Utah, New Mexico and Mexico. Furthermore, the Ruby Violet mine in the Wah Wah mountains of Utah, closed in 2001, is the only source in the world which has provided crystals suitable for cutting. The Utah Geological Survey estimated that one crystal of red beryl is found for every 150,000 gem-quality diamonds. In 2006 the Jewelers Association designated red beryl as the world’s rarest colored gemstone.

While emerald and other iterations of gem-beryl occur in pegmatites and metamorphic stones red beryl occurs in topaz-bearing rhyolites. This variety crystallizes under high temperatures – along fractures and within cavities. As described by geology.com:

At the Ruby-Violet mine, the topaz rhyolite member of the Blawn Formation is a lava flow that erupted from volcanic vents about 18 to 20 million years ago. As the lava flow moved and cooled, fractures and cavities developed in the rock. These openings allowed superheated beryllium-rich water and gases to enter the formation. These were being released from a magma chamber that was degassing below.

At the same time, surface water was entering fractures above and moving downwards. It carried oxygen, manganese, aluminum, and silicon leached from the rocks above. Superheated water and gases from below encountered cool waters from above, which produced a change in geochemical conditions that triggered mineral crystallization within the fractures and cavities of the topaz rhyolite. This crystallization is thought to have occurred at temperatures between 300 and 650 degrees Celsius. Red beryl deposits at other locations in Utah did not form at the same time as the Ruby-Violet deposit. They are in different rhyolite flows with different eruption dates. Mineralization within the region ranges from about 5 million years ago to about 20 million years ago.

A rock by any other name

Discovered by bookkeeper-turned-miner Maynard Bixby, red beryl was named bixbite in his honor in 1906. But that term quickly became confused with bixbyite – a black, cubic manganese iron oxide – which Mr. Bixby had discovered some years before – so it was renamed to red beryl.

Red beryl has been mis-sold under the names red emerald and scarlet emerald. These were never legitimate, since emerald is by definition green, and using the word “emerald” to market red beryl is now prohibited by USA Federal Trade Commission regulations.

Red Bery can also be confused visually with its pink cousin pezzottaite. And while experts can distinguish between rough crystals due to their separate rough structures (beryl is hexagonal whereas pezzottaite is trigonal) and different refractive indexes, pezzottaite has been confusingly sold under the names raspberry beryl and “raspberyl.”

None of those are correct. This variety of beryl is correctly promoted and sold under the name red beryl. Additionally, no other gemstones should be referred to as red beryl.

Despite it’s extreme rarity, red beryl can be found available for sale. For the reasons given above, it should only change hands with a report from an independent gemological grading institution attesting to its authenticity.

Finally, if you find yourself fortunate enough to own red beryl it’s important to avoid putting it in an ultrasonic cleaner. Stones with the characteristic hollow inclusions found in Beryl can be damaged by sonic cleaning. And that would be a shame.